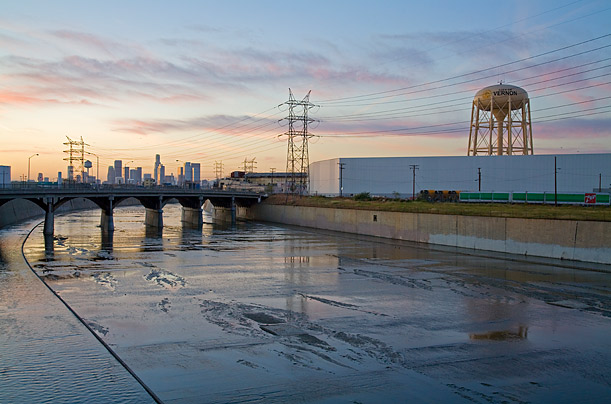 The LA River is one of the most familiar sights in cinema, though many filmgoers might be hard-pressed to recognise it as a river. A hard-sided cement trench sluicing through the city, it’s rare to see it adorned with so much as a puddle. Indeed, this ‘river’ is a startlingly inauthentic place, empty and barren, the nearest thing to a soundstage that can be found out in the world. Perhaps because of this, movies typically portray the river as the site of breakneck car-chases, bruising encounters between giant robots, and any other moments of sterile, choreographed mayhem you want to film without making your viewers worry about the consequences. Yet Nicolas Winding Refn’s new thriller, Drive, is all about consequences, and fittingly, it also offers us a new, more humane vision of the LA River.

Early in the film, Ryan Gosling’s unnamed driver gives his neighbour Irene (Carey Mulligan) and her son Benicio a lift home from the garage where he works. We already know that the driver is mixed up with criminals, and that Irene’s husband is in jail, so the situation is rife with potential danger.  However, both the driver and Irene simply want each other’s company. So when he asks her if she’d like to see something, she agrees and he takes them down to the LA River. Here the film acknowledges the action scenes which are the river’s more usual fare as the driver slips his Mustang silently along the riverbed, a slow, sweet electronic melody building in the score.

The emotional heart of the scene, indeed, of the film, comes as they reach the ‘end’ of the river – not its source, but instead, the place where the concrete stops and nature takes over. Shot on location in Reseda, the scene shows the driver in a rare moment away from his car, but also joining Irene and her son in exploring a miniature oasis of trees, bushes and gently flowing water. The music which began during the earlier driving scene resolves into the insistent chorus of Electric Youth’s ‘A Real Hero’, earnestly and sweetly repeating the words ‘a real human being’ to underscore the very moment when Gosling’s glazed anti-hero comes to value other people enough to fight for them.