This article originally appeared on The Cinematic Animal.

After reading, enter our competition to win the book Lives Beyond Us: Poems and Essays on the Film Reality of Animals. 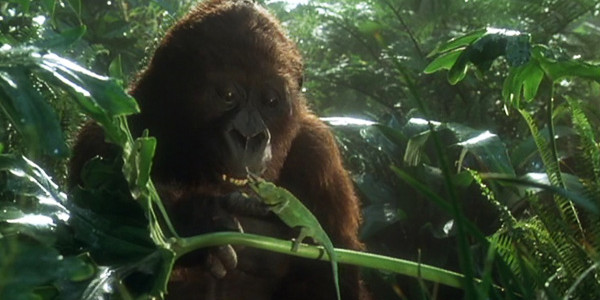 I can’t speak for others who were teenagers at the time, but for me in the mid-1990s Congo was an impressive film, and one that I’m pretty sure I would have given a good review, had I been a reviewer (Roger Ebert would have agreed with me, but he’d have been in the minority). I’m older now, and the film has ‘aged’ in the way many action-adventure films age, but at least two of its features seem worth noting two decades on. One is Tim Curry’s remarkable performance as a purportedly Romanian philanthropist, which is probably best appreciated first-hand (you can see some clips here). The other is the film’s main non-human animal character, Amy, a gorilla who has been taught to use American Sign Language and who, through the use of a motion-tracking glove and voice synthesiser, can talk directly to the human characters.

I think even the film’s detractors would acknowledge that Amy is a highly unusual character. Obviously, few animal characters in film (at least outside the fantasy genres) are able to use language, because few animals in real life are able to use language – and even those that are (mostly great apes such as chimpanzees, bonobos and gorillas) need to spend a lot of time with human teachers to learn to do so (1). Amy’s ability to talk seems key to her characterisation as an emotional, active and sympathetic being: a main character, in other words, of a type very familiar from mainstream cinema. Like many characters in the action genres, Amy is troubled by feelings of incompleteness and embarks on a journey that sees her overcome various setbacks, save the day and finally find a kind of emotional peace. At several points, she uses speech to communicate emotions and desires that would be hard to convey succinctly in any other way. For example, when she meets a wild gorilla for the first time, Amy looks him in the eye and says, “Hello. I Amy. I Amy. Good, good, good Amy” – an introduction that gets across her openness to forming some sort of relationship and that (along with the sad music) strongly cues the viewer to see her subsequent rejection by the gorilla as a moment of personal heartbreak. 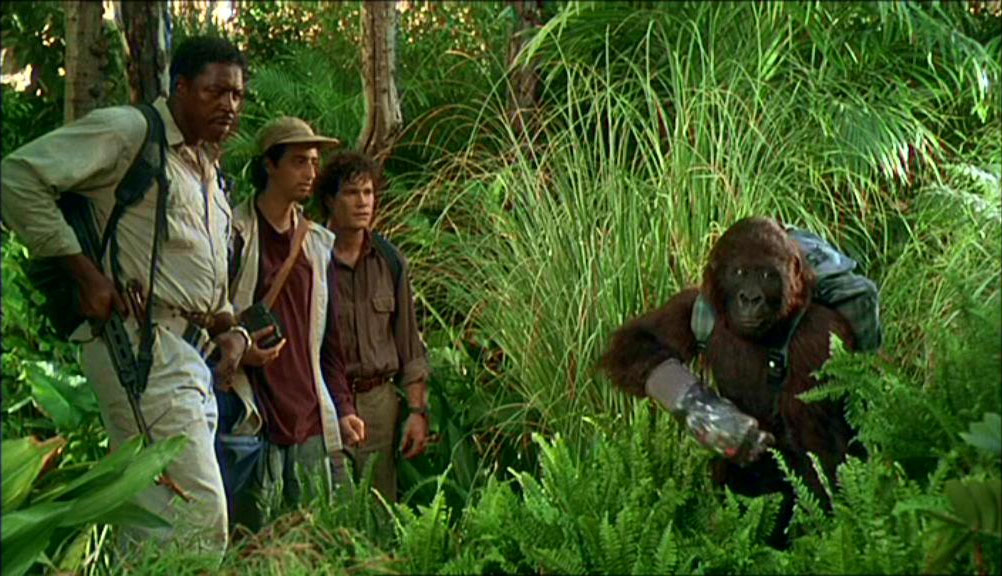 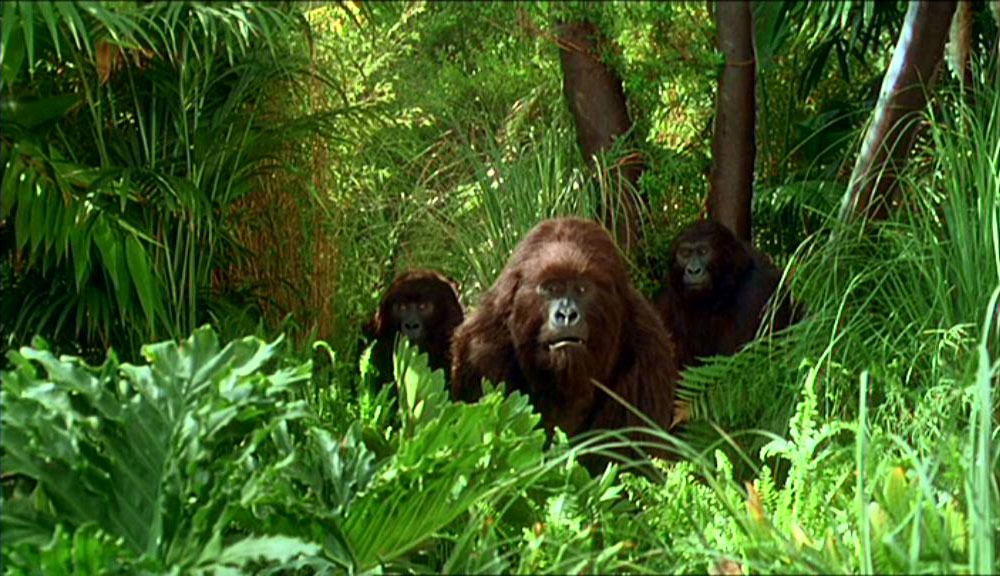 Amy later saves Peter, the primatologist who taught her how to talk and who saw that she wanted to return ‘home’ to the Congo jungles, when he is being attacked by a group of grey ‘killer’ apes. Having chased off Peter’s assailants – “Bad gorillas. Go away,” she says to the baffled animals – she puts her arms around him and expresses her maternal love for the man who had until recently been acting as her father: ‘Mother. Mother… Peter hug Amy.’

By the standards of a good deal of critical writing on animals in film and other arts, which frequently sees narratives or images that encourage us to ‘take the position’ of the animal as good news (2), Congo would come out quite well (granted, the film features a legion of brutal apes with little in their minds but murder; these are ‘unnatural’ animals, however, bred for aggression by their human masters). Amy, clearly, is an animal whom the film invites us to identify with and to see as in various ways a ‘person’, with dreams, memory, emotions, self-awareness and, implicitly, a right to, for instance, life and liberty (3).

Of course, someone might well say that as achievements in animal characterisation go, Congo’s is not really so hot, given that Amy has lots of characteristics, such as speech and particular facial features, that viewers are likely to perceive as ‘human’ and that seem almost to guarantee a high degree of identification. I expect many critics (I speak for myself too, here) would be glad to see a wider range of less familiar animal characters in main roles in cinema, particularly in genres where animals have traditionally appeared as monsters or as humans’ property. But it does also seem reasonable to expect humans to have difficulty seeing animals as proper characters when they are not obviously ‘persony’ in cognitive or emotional capacity, and it may be that some genre films that attempt to construct other varieties of main animal characters need to make an imaginative leap of the kind that doesn’t always play well in Hollywood. Congo – a hit, despite the reviews – probably can’t be placed at the more radical end of the spectrum in this regard, but in Amy it has a character that entertainingly pushes at the boundaries of conventional characterisation.

One reply on “The Cinematic Animal: Congo (Frank Marshall, 1995)”