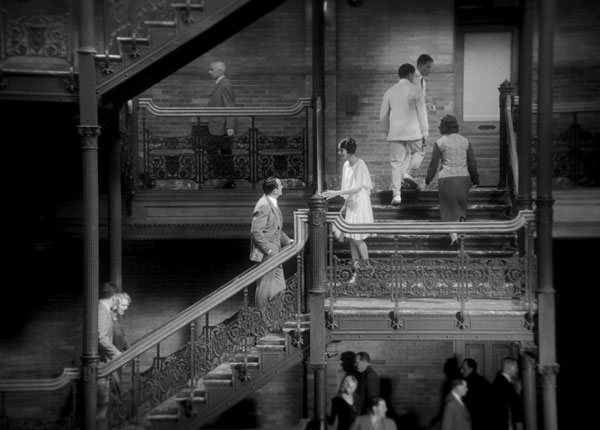 A star in its own right, Los Angeles’ Bradbury building has featured in films as diverse as Double Indemnity, Blade Runner and (500) Days of Summer. Illuminated by a large central skylight and lined with ornate wrought-iron railings, the courtyard of the Bradbury stages a transition between interior and exterior. In Michel Hazanavicius’ recent (silent) movie The Artist, the Bradbury becomes the site of multiple transitions.

The Artist tells the story of George Valentin (Jean Dujardin), a wildly popular silent movie star whose path crosses with that of lovely aspiring actress Peppy Miller (Bérénice Bejo). Following an initial encounter that establishes Peppy as a fan of George’s, Peppy makes her way acting as an extra in the productions of the (fictitious) Kinograph studios. She frequently shares sets with George and the two develop a mutual affection. The advent of sound films threatens George’s career, as he refuses to adapt to the new format. While George’s stability crumbles and his fame withers away, Peppy thrives, starring in her own films, the first one of which is significantly titled “Beauty Spot”, named after the distinctive mark that George had drawn near her mouth.

The Bradbury courtyard’s wide staircase becomes the most explicitly spatial representation of this simultaneous movement of ascent and downfall caused by the transition from silent movies to “talkies”. Going up the stairs to the offices of Kinograph studios, a cheerful and smiling Peppy recognizes George on his way down. She affectionately takes news of him while he tries his best not to appear dejected. Unable to imagine that George would fall into despondency and become a near recluse, Peppy shows him her latest dance number and blows him an enthusiastic and emphatic kiss from the landing that he “catches”, concealing his dejection. While this type of scene would later repeat itself in a restaurant, the parallel between these two protagonists’s intertwined destinies is nowhere expressed so eloquently as on the Bradbury’s stairwell. In a similar vein, it is on the level ground of the stage that, together, Peppy and George will find a creative solution to the challenges posed by this period of transition. 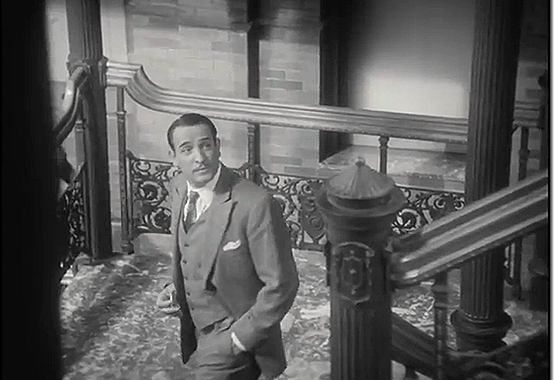 This scene marks a change in tone, as the upbeat music that had up until then accompanied the characters’ dance numbers becomes far less frequent, establishing a mournful and nostalgic tone for George’s scenes. Despite adopting a more somber tone, The Artist‘s mise-en-scène continues to be visually stimulating, exploring various historical Los Angeles locations. This use of recognizable locations from various historical periods ranging from the end of the nineteenth century to the 1930s is fitting in a movie that revisits a key transition in film history from within the inner-workings of the Hollywood film industry. The medium shots and long shots used in this scene and in the rest of the movie encourage us to revel in the rich detail of these well-preserved locations, all highlighted by the crisp black and white photography.