Kei Kumai’s Deep River (Fukai Kawa, Japan, 1995) starts with images of a Hindu temple in ruins and shots of the countryside in India through which a bus is passing. The camera eventually hones in on the group of Japanese tourists inside the vehicle, picking out in a succession of close-ups the film’s three main characters: the middle-aged Isobe (Hisashi Igawa), the elderly Kiguchi (Yoichi Numata), and Naruse (Kumiko Akiyoshi), a woman in her thirties. Based on Shusaku Endo’s eponymous novel, the first part of the film reveals the past of these three characters, explaining their different motivations for the trip to India. The second half of the story depicts their stay in the holy city of Varanasi, which, rather than being mere tourism, turns out to be an existential quest by three lost souls seeking relief. Kumai, who treated controversial topics such as medical experiments on American POWs during the war by Japanese surgeons (The Sea and Poison, 1986, also adapted from a novel by Endo), is still a neglected filmmaker whose style, avoiding fashionable experimentation, reveals in this film too a forceful simplicity. It is this simplicity which effectively supports complex topics such as guilt and salvation, inner conflict and reconciliation.

Shots of huge crowds on the banks of the Ganges contrast with a series of close-ups of flowers; scenes of the noisy urban life are interspersed with periods of silence. The images of flowers and nature break the flow of the story, thereby creating moments of poetic cadence. As well as adding visual beauty to the film, they are symbolically connected with its themes of death and rebirth and the search for God. In Isobe’s story, the changes brought about by the seasons, as an indicator of time passing and as a symbol of evanescence, are indicated by the changing colour of the leaves, a device frequently used in Japanese films (but nevertheless captivating). Varanasi itself is of special significance as the place where devout Hindus wait for death and where the ashes of the deceased are scattered on the waters of the Ganges. According to Hindu belief, this is the river of liberation that makes it possible to break the cycle of rebirth and attain salvation. 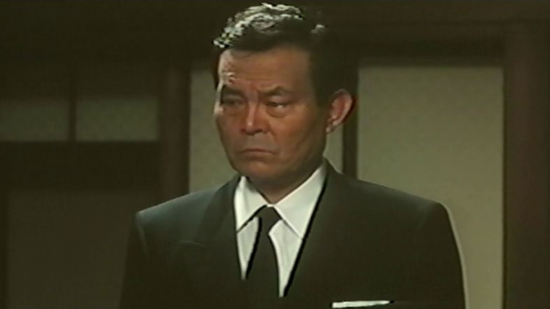 Isobe hopes to find the reincarnation of his wife in India. An American parapsychologist he contacted told him that she has been reincarnated in the body of a three-year-old Indian girl living in a village near Varanasi. A flashback shows Isobe’s wife (Kyoko Kagawa) beseeching her husband: “I will be reborn somewhere in the world. Look for me. Promise me.” These sentences are repeated several times in the film, and Isobe is obsessed with his wife’s dying wish. However, his search, hindered by his inability to communicate with the Indian villagers, is in vain. The sequences in which Isobe, alone in a crowd, tries unsuccessfully to make himself heard reveal his loneliness and growing despair. He realizes that he does not really believe in reincarnation and has undertaken the journey to India out of respect for his deceased wife. However, one of the last sequences shows his smiling face, suggesting that having fulfilled her wish, he can now accept his loss. 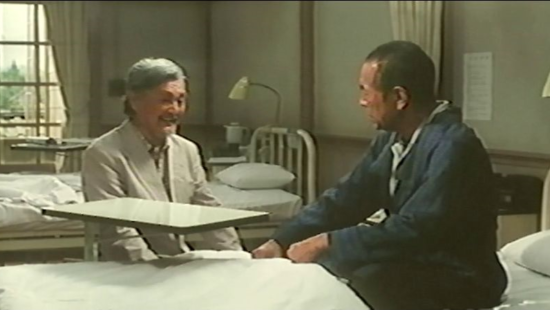 Kiguchi’s story is one of guilt and redemption linked to World War II, a distant past which 1990s Japan had not yet come to terms with. The flashback starts with clips from a Japanese war film of the late 1950s in which Numata played a soldier. The black and white images evolve into colour photography showing the protagonist a few months before his trip to India at the Omizutori Festival at Todaiji Temple in Nara. At these Buddhist repentance rituals Kiguchi bumps into his former comrade Tsukada (Toshiro Mifune), the man who saved his life in the Burmese jungle during the retreat of the Imperial Japanese Army. Fifty years later, Tsukada’s wife reveals the truth about her husband’s act of salvation, telling Kiguchi that what Tsukada had tried to feed him with was not meat from a lizard but human flesh. Cannibalism had given Tsukada the strength to save his comrade from certain death. Seriously traumatized by his horrible deed, Tsukada became a heavy drinker, and he dies shortly after the two men meet again. Kiguchi’s journey to India is a pilgrimage during which he prays for his friend’s salvation. It is worth mentioning that this was Mifune’s last screen appearance (he died in 1997). Though already marked by illness, he still has an amazingly strong presence, radiating a dignity and beauty which Kumai was able to capture in a way that shows great respect. 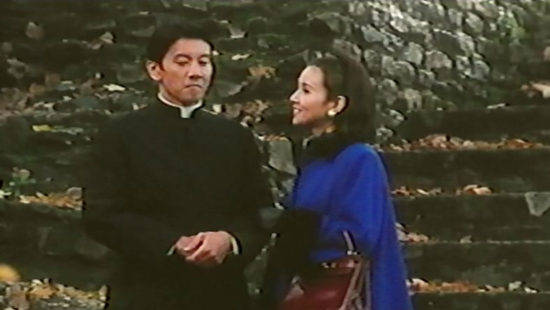 The central story concerns Naruse, who is trying to find Otsu (Eiji Okuda), the man whom she once seduced. The flashback shows her several years before when she was a student attempting to turn the shy and awkward Otsu, a devout Christian, from his faith. Young and inexperienced, he abandons all for her, but she is quickly bored by him and puts an abrupt end to their relationship. Years later, Naruse is the frustrated wife of a successful businessman, referring to her husband as “ordinary and conventional”. During a trip to France she again meets Otsu, who is now a Catholic priest and a student of theology. Naruse sees in Otsu her trophy and someone whose life she has influenced (“So because of me you are studying theology?”) whereas Otsu struggles repeatedly with his faith. Dissatisfied with Christian dogma and a Manichean view of good and evil, he is looking for a kind of Christianity more appropriate for Japan.

His quest leads him to India. In Varanasi, he lives in a Hindu community amongst the poorest of the poor on the margins of the caste system, being an outcast himself. Naruse listens to him, more and more impressed by his seriousness and humility but still unable to fully understand his feelings. Clearly seeking for meaning in her life, she takes a ritual bath in the Ganges, a symbolic gesture of purification. When she says that she has found humanity in Varanasi, she looks transfigured. However, Otsu’s death destroys her feeling of serenity. He dies because of a selfish act by a Japanese tourist intent on obtaining a photo scoop. This young man’s egoism provokes a catastrophe when he takes pictures of a cremation, something which is absolutely taboo. Otsu manages to calm the angry crowd, but when he follows the fleeing photographer, he accidentally falls down a flight of steps and dies hours later in hospital. 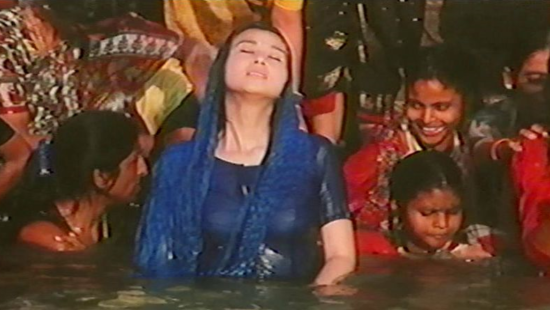 Otsu explains that God is humanity and he is love. It is this example that he tries to follow, and it includes the acceptance of suffering. His last words are: “This is my life. All of it … is good.” The idea of death and rebirth, the cyclical vision of existence in which life and death are intertwined, permeates the whole film. Otsu’s view that a clear distinction between good and bad is not always possible is best exemplified by Kiguchi’s story. Deep River is a return to the roots, showing a world in which nature, animals and human beings coexist in harmony, something the Japanese visitors have lost sight of. Through his characters’ discoveries, Kumai tries to capture a different aspect of India beyond the tourist vision, connecting it with a discourse on spirituality – a spirituality revealed by image and sound (including the absence of sound). His three protagonists do not necessarily find salvation, but they find hope and become aware of life’s complexity.