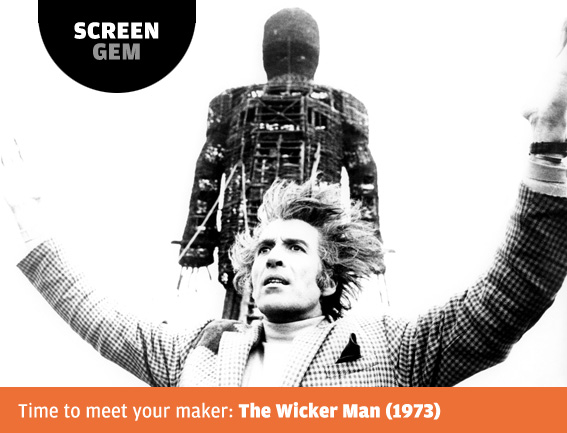 Of all the bizarre and unsettling sights that Edward Woodward’s Sergeant Howie encounters during his time on Summerisle – open air orgies, a mother breastfeeding in a cemetery, the Hand of Glory, phallic topiary and outlandish animal costumes – nothing prepares him for the monstrous beauty of The Wicker Man. The deeply conservative and devoutly Christian officer of the law is confronted by an image that goes against everything he believes. The look of terror on his face as he first sees the giant pyre structure is visibly at odds with the islanders’ obvious reverence for what it symbolises.
The Wicker Man represents just how far Lord Summerisle and the populace have retreated from Christianity, and modern society, into ancient sacrificial practices. In the cultural context of the era it highlights the fear of alternative communities, counter cultures and beliefs that were prevalent at the time. Howie, the ultimate sacrificial lamb, is promised a martyr’s death in the belly of The Wicker Man, an offering to the God of the sun and the Goddess of the orchards. As the grotesque effigy is set alight, the islanders look on singing heathen odes. The doomed Howie stares out at them in disbelief as the giant conflagration collapses, exposing the setting sun on the horizon, the blood sacrifice is complete.
Butchered in the editing room, relegated to B movie double bills and woefully under appreciated on its release, Robin Hardy’s The Wicker Man (1973) has since risen from neglect, via cult fame, to become rightly regarded as a seminal British horror movie. Its eponymous effigy is an icon not only in the horror genre but also in film history.