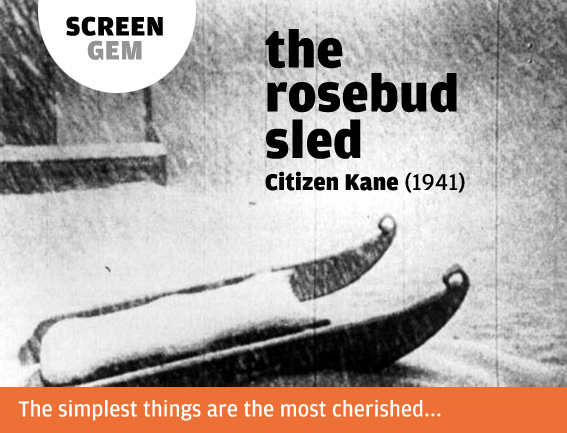 Practically every notable bit of movie memorabilia has been bought for some obscene sum by some obsessive fan. But the sale of the Rosebud sled was special: the buyer who forked out a fortune for it wasn’t bidding on behalf of an ostentatious movie museum-cum-café or an anonymous Charles Foster Kane-esque collector – he was Steven Spielberg.

No other onscreen object is as rich in significance as Citizen Kane‘s Rosebud sled. Within the picture it is the undiscovered answer to the riddle that powers the entire plot, while to audiences it is symbolic of the loss of innocence, maternal love, childhood and a life unspoilt by greed or ambition. Rosebud’s final, devastating appearance – when it is tossed into an incinerator by a pair of uncomprehending workmen – is, quite simply, the key scene in the world’s most celebrated film.

By becoming emblematic of the movie, Rosebud became emblematic of Orson Welles’ achievement as its creator – an achievement envied and imitated by every artistic-minded moviemaker of the last half century. But just as C. F. Kane found it impossible to recapture his childhood, so every would be-Welles has found it impossible to replicate Kane’s quality and impact – and so it is unsurprising that filmmakers would fetishise the object that best represents it. Onscreen, the sled is the secret of Citizen Kane. Perhaps that’s why Steven Spielberg was so keen to possess it.