From Blade Runner‘s sky traffic to Star Trek‘s starships, science-fiction cinema has often invented futuristic methods of transportation – and the most futuristic of all is teleportation. Unlike the utopian visions of Starfleet crew beaming aboard The Enterprise surrounded by a mist of glistening light, David Cronenberg’s remake of The Fly suggests a more dangerous, unperfected and downright messy genesis for the ultimate form of convenience travel.

The Fly‘s Telepods transport someone, or something, by dematerialising them in one pod and reconstructing them in another. The design of the machines is a drastic departure from the original 1958 film, and for the better. The first Fly’s Telepods were more clinical, resembling the love child of a phone box and a perspex prison cell; Cronenberg’s oval contraptions are the perfect combination of organic shape and industrial texture, appearing as giant, ridged, metal eggs. Indeed, this ovate image proved so powerful it was used in the film’s famous ‘Be Afraid, Be Very Afraid’ poster (which echoes that of another body horror classic, Alien). 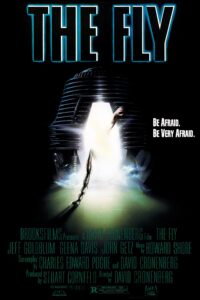 The film not only deals with the fear of bodily decay, but also fuels the technophobia that was a recurrent theme in 1970s and ’80s Sci-Fi and horror. With Jeff Goldblum in over-ambitious and over-obsessive mode as manic scientist Seth Brundle, the pods provide the film with the perfect setting to realise the terrifying possibilities of unchecked scientific endeavour, and help to create one of modern cinemas most horrific screen monsters. When Brundle finally appears to have perfected the pods, he tests them on himself; in the process he unwittingly fuses his DNA with that of a fly. The pod acts as a metaphorical egg, hatching to reveal an abhorrent perversion of the natural order.

In the iconic closing scene of the film Seth (‘Brundlefly’) is mercifully euthanised by his girlfriend after he unintentionally fuses himself with one of the Telepods. It is this enduring image of Seth’s grotesque cadaver that truly exposes the danger of his invention and its power to destroy the self.