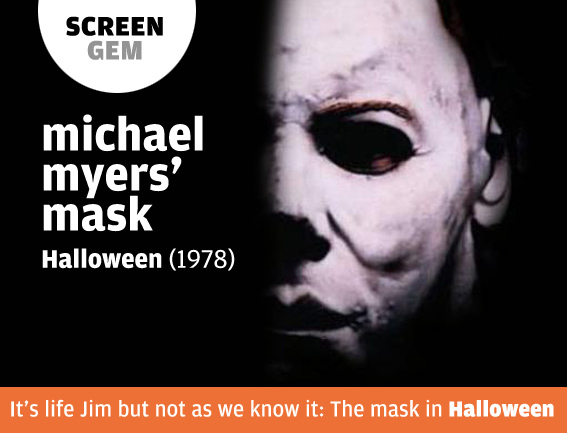 A definitive feature of the definitive slasher film, the Michael Myers mask is an unlikely masterpiece of movie design. It was, in a favourite titbit of horror fan trivia, adapted by production designer Tommy Lee Wallace from a store-bought Halloween mask of William Shatner. Mercifully, the mask looked little like Captain Kirk when Wallace acquired it and even less like James T. when he’d finished working on it.

What Wallace produced was a false face both featureless and distinctive: something obviously human and yet unmistakably artificial. There is a hint of the necrotic about its texture and colouring, which both suggests the decayed morality and mind that operate behind it and foreshadows the fate they will inflict; but its vampiric pallor also allows it to function as a void onto which we can project any private fear or personal suspicion about Michael’s murderous motives.

So influential was Halloween that dozens of its key characteristics were instantly established as necessary features of the flood of fright films it inspired – but only the mask worn by its soulless stalker summed them all up in one unforgettable image, and only it deserves to be the icon of its era of American horror. It is, therefore, an unfair irony that Jason Vorhees’ ice hockey mask – which is, at worst, a rip-off of the Myers’ mask and, at best, a far less evocative and innovative item from a thoroughly derivative film (Friday 13th Part III) – has probably replaced it as the object most emblematic of the slasher sub-genre.