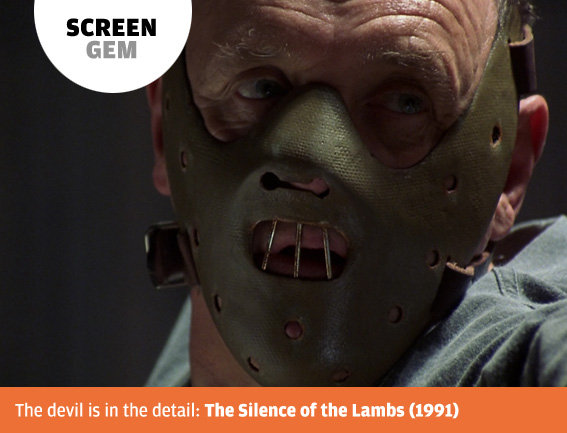 Many of the movies’ most memorable murderers wear masks. Those murderers, though, are generally the one-dimensional stalkers of slasher movies and those masks are usually worn for their benefit, not ours. Hannibal Lecter’s mask is forced upon him – for our protection.

Transferred from one maximum security cell to another, Lecter is trussed inside a straitjacket, locked into leg restraints and tied to a trolley. Finally, crucially, he is masked. Lecter can employ almost any part of his body – and almost anything – as a weapon and, as an infamous cannibal, his teeth are his most offensive asset. The mask allows him to breathe, but not bite.

The look of the mask is, of course, disturbing in a most obvious way but, when weighing its impact on us, we are reminded, as Lecter tells Clarice Starling, ‘That is incidental’.  The chief reason for the mask’s effectiveness is its ineffectiveness. It covers Lecter’s mouth – and so stops him chewing anyone’s nose off – but it does not prevent him from talking. As he demonstrates when he taunts the mother of a serial killer’s captive, he can inflict far crueller attacks with his tongue than his teeth. What’s more, the mask does not incapacitate Lecter’s eyes, which are ever alert and constantly scan for weaknesses, whether in psyches or security systems.

Most importantly, though, the mask leaves the top half of Lecter’s head exposed, and so reminds us that it is his brain that threatens us most. It is in his brain that he conceives his crimes, and it is because of its unparalleled abilities that he is able to control the actions of those who supposedly control him. The mask cannot, could not, stop Lecter from thinking – and so he is still lethal. Although it is superficially the final barrier between Hannibal Lecter’s malignancy and our vulnerability to it, his half-mask simply emphasises that no means of incarceration can confine him – and this is why it has become an icon of evil.