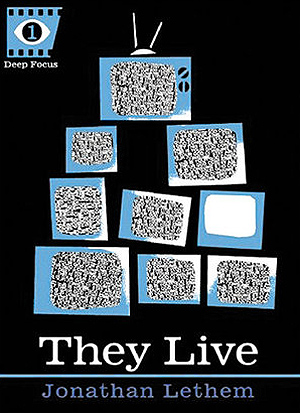 Deep Focus is a series of film books published by California based Soft Skull Press with a fresh approach. Take the smartest, liveliest writers in contemporary letters and let them loose on the most vital and popular corners of cinema history.

Kicking off the series is Jonathan Lethem’s take on They Live, John Carpenter’s 1988 classic amalgam of deliberate B-movie, sci-fi, horror, anti-Yuppie agitprop. Lethem – author of Fortress of Solitude and Motherless Brooklyn, which was named Novel of the Year by Esquire – exfoliates Carpenter’s paranoid satire in a series of penetrating, free-associational forays into the context of a story that peels the human masks off the ghoulish overlords of capitalism. His field of reference spans classic Hollywood cinema and science fiction, as well as popular music and contemporary art and theory. Taking into consideration the work of Barbara Kruger, Jenny Holzer, James Brown, Frederik Jameson, Shepard Fairey, Philip K. Dick, Alfred Hitchcock, and Edgar Allan Poe, not to mention the role of wrestlers—including They Live star “Rowdy” Roddy Piper—in contemporary culture, Lethem’s They Live provides a wholly original perspective on Carpenter’s subversive classic.

Both They Live and Christopher Sorrentino’s take on Death Wish will be available to buy in the UK from 20 January with two further titles – Lethal Weapon and The Sting – due to follow soon after in February and March 2011 respectively. Add to this some wonderful cover art produced by Spacesick, he of the ‘I Can Read Movies’ series of fictional book covers that became an online phenomenon in 2009 (which no doubt helped him to land this gig) and Deep Focus looks like a book series well worth waiting (and forking out) for.

Pre order They Live from Amazon