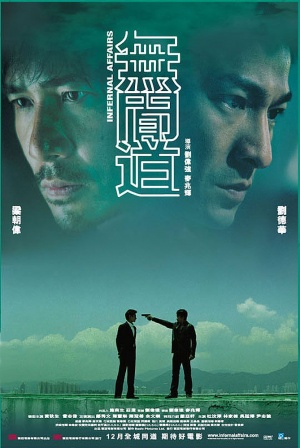 The philosophical and religious overtones of Infernal Affairs(2002) are captured beautifully in the one-sheet that accompanied the Chinese theatrical release. That the identity of the men silhouetted at the centre is obscured forms a very telling statement about the lonely and troubled characters of Chan Wing-yan (Tony Leung), an undercover cop who infiltrates a triad gang, and Lau Kin-ming (Andy Lau), a triad member who assumes a position in the Hong Kong police force.

Both become so embroiled in their assumed identities that their understanding of who they really are becomes increasingly complicated; a tormented existence, akin to the eighth layer of ‘continuous hell’ referred to in the Buddhist sutra at the beginning of the film. Much like the conception of Buddhist hell, the design consists of layers formed by different textures of rooftop, the Hong Kong cityscape, sky and atmosphere, emphasized by the serene tones of blue and green. The superimposed, ethereal faces of the stars feature prominently, with Leung and Lau working to sell the film and simultaneously contribute towards a contemplative, serious mood.

Overall, it suggests that Infernal Affairs is a blockbuster experience removed from the traditions of Hong Kong filmmaking that were at the height of their popularity during the ’80s and ’90s, typified by the output of filmmakers such as John Woo and Johnnie To. Infernal Affairs is instead marked by high-status associations with art cinema and a certain intellectualism, as part of an ambitious attempt by Media Asia to confect a successful transnational product within the accessible format of the crime genre, that would work to change the fortunes of a film industry in serious decline.

In stark contrast, the busy design of the UK Tartan Films one-sheet vulgarly draws on familiar and accessible conventions: 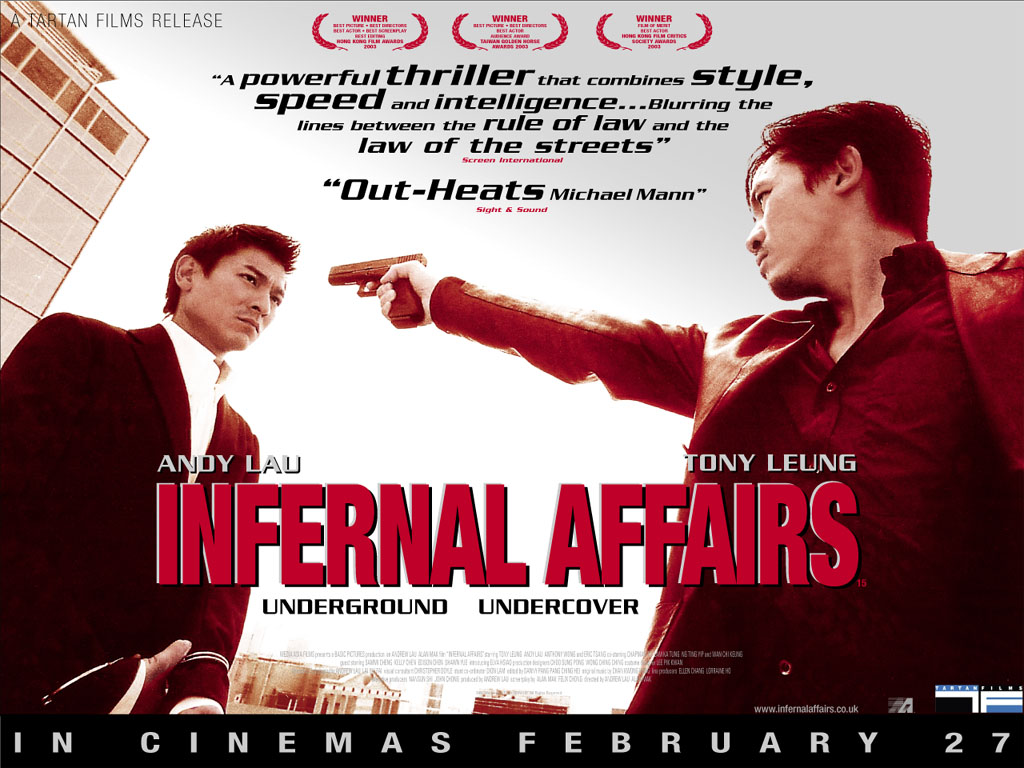 Emboldened text foregrounds the conventions familiar to the UK. “A powerful thriller… Blurring the line between the rule of law and the law of the streets”. Potential audiences are helpfully given a frame of reference, which has a combined aim of contributing towards a reading strategy, playing off the success of other film products, and legitimizing an East Asian film product using western inter-textual references; it “Out-Heats Michael Mann”, a statement that relates to another common descriptor as “the inspiration for The Departed” (2004). This is part of a wider process that aims to re-contextualize Infernal Affairs in a manner familiar to the site of reception in which it finds itself.

As Hong Kong has traditionally been too small to support its industry alone, its cinema has operated within a transnational space through cross-border exchanges and world-oriented filmmaking. Infernal Affairs is no exception, and its one-sheets demonstrate the role of marketing in facilitating the journey of the film abroad, and (at times, problematically) re-positioning it within a different cultural sphere.