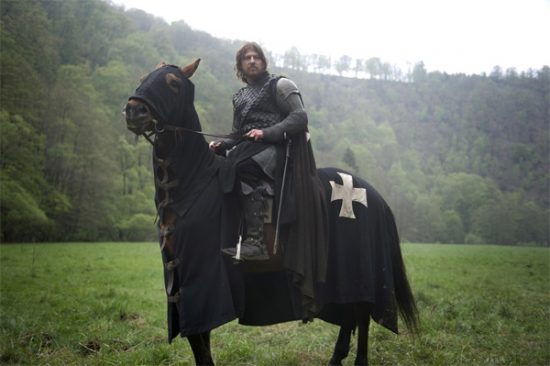 Set in 1348 – the year the plague is believed to have reached England from Europe – Black Death captures the devastation this pandemic once caused with unflinching realism.

In an early scene, gruesome shots emphasise the severity of this wave of disease. The protagonist, a young monk named Osmund (Eddie Redmayne), surveys a large collection of dead bodies, some barely clothed by rags, as they decompose on a courtyard floor. A handheld tracking shot follows two unkempt men as they drag an elderly male corpse through the village, followed by a montage of close-up shots that show filth and squalor as rats crawl over ravaged bodies. Finally, we’re shown a rotting leg, exposing plague symptoms, sprawled over an elderly woman bespattered with mud.

Next, Osmund and a band of soldiers led by Ulric (Sean Bean) begin their quest: under the orders of their bishop, they must capture a necromancer who has a hold over an isolated community and is believed to be sacrificing people in an attempt to cure England of its plague. 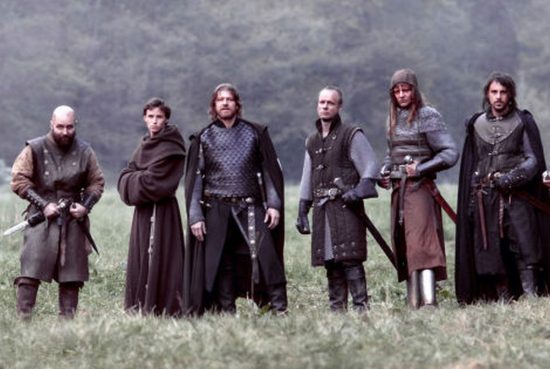 As Osmund and his accompanying knights travel across areas devastated with pestilence, they venture upon a remote hamlet defined by rickety, filthy dwellings that the plague, and its aftermath, has transformed into a sombre and stark landscape. A panning shot details drab, lifeless shrubbery as it winds its way into a partially burnt section of woodland that surrounds the hamlet, and a billow of smoke lingers around this barren space and surrounds the travellers as they enter the site.

The following sequence reveals this pre-modern place not only as disease-ridden, but also in a state of pitiful ignorance: a passing camera lingers on the burnt clothes, blackened flesh and bound hands of a female corpse tied to a stake. The hamlet was, in recent hours, a site for conflagration and its residents either evacuated or victims of witch hunters. 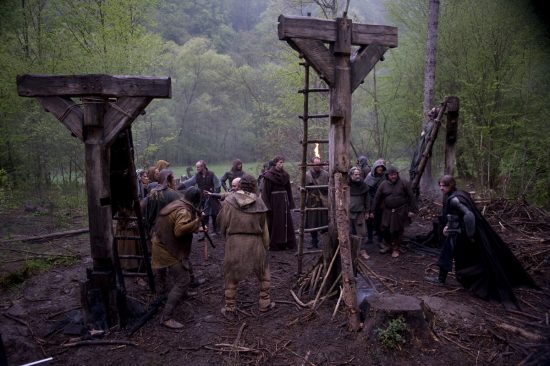 An unaccompanied young girl emerges from the fog and catches the eye of the religious Osmund. Slow motion photography captures a brief moment of shared sympathy for human suffering as the two hold each other’s gaze. The soldiers he travels with, however, are oblivious to the girl’s presence, and show little pity as they hurry the novice monk along. In these dark times of disease and inevitable death, immorality has become the norm and values of compassion appear diminished.

Accentuating the brutality and vileness of medieval England, Black Death is the archetypal ‘dirty realist’ period film (a term which has its origins in North American literature but which film and TV scholar Andrew Higson popularised with British historical drama). This trend has become increasingly prevalent in British cinema over the last two decades and contains examples in which the past is represented as a place of savagery, with murky towns, untamed rural landscapes and vicious inhabitants.

Promoting ‘dirty realism’, Black Death resists the Hollywood take on medieval England that is present in a number of drama/action productions made between the late 20th-century and the start of the 21st-century; a collective vision that promotes a rose-tinted perspective of handsome knights, civilised behaviour and heroism, such as Robin Hood: Prince of Thieves, First Knight, and A Knight’s Tale.

Thomas lives in Leicester, UK and works in academic support, providing assistance for learners across a range of further and higher education settings. He is also a PhD student at The University of Wolverhampton, where he is currently carrying out research on genre anthology television drama. His writing often links to his interest in horror film and television, especially in a British context. Outside of academia, Thomas enjoys reading occult and paranormal literature.