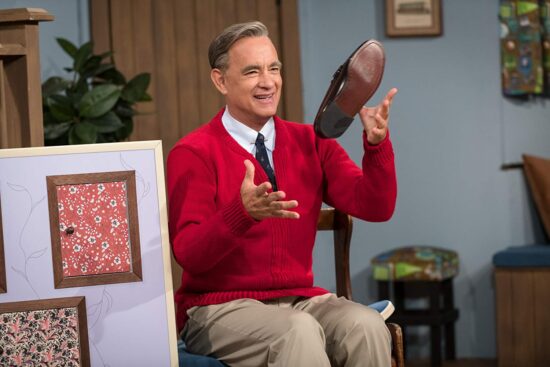 A good movie makes one nostalgic without a reason to and a memorable one adds a glint of value in the landscape of our lives. Mister Rogers’ Neighborhood created just that for thousands of kids in the early 60s to early 2000s. Many documentaries and stories have retold the works of Fred Rogers, the charismatic and gentle host who taught compassion and understanding for the young. A Beautiful Day in the Neighborhood (2019) is no exception in adding to the lessons learned from Mister Rogers’ neighborhood.

A Beautiful Day in the Neighborhood conveys just such a message of love and presence. Instead of telling the story from the perspective of Mister Rogers, the film follows the narrative of Lloyd Vogel (Matthew Rhys), assigned to write a feature story about Mister Rogers (Tom Hanks). Highly skeptical and stressed by his own irresponsible father, Lloyd’s life changes when he interviews (and is interviewed by) Mister Rogers. This is a story about forgiveness and recounts the slow thaw of harsh feelings in relationships.

The film unfolds in the toy-like yet homely town and transitions to Tom Hanks, who expertly captures the liveliness of Mister Rogers in his gait and soothing voice, singing the opening song accompanied by piano. His easygoing character and willingness to focus on the now, such as interrupting his show to greet Lloyd, juxtaposes with the other characters who focus on either the past or the future. Whether it is Lloyd’s hard feelings against his father or the producers of the show who want Rogers to follow the script, anxieties and stress all dissolve when Hanks intentionally shortens his distance from others and attends to their individual presence.

There is one scene in the movie when Hanks and Rhys act out a conversation at a Chinese restaurant and Hanks says, “Let’s just take a minute and think about all the people who loved us into being.” A silence ensues and, in that restaurant, the other attendees (real-life people who either worked for the show or were related to Rogers) all stop to observe the silence. It is a moment of self-reflection for the viewers, as Hanks looks directly through the camera; but it is also a moment of tribute to the life of Mister Rogers, as his loved ones think of all he used to be and his continuing legacy.

There are several motifs that string segments of scenes into the film’s theme. The puppet that comes to life on Mister Rogers’ hand and its reappearance poking out of Mister Rogers’ bag; the beginning joyful music and the ending Mister Rogers’ silhouette playing the lowest keys of a piano give the film a fluidity and rhythm that mimic the ups and downs of life itself.

Director Marielle Heller said in an interview that she hopes the movie will make people reflect about their emotional being and humanity. A Beautiful Day in the Neighborhood is a message from the life of Fred Rogers and one that makes us all appreciate the beauty in our neighborhoods and what wonders we could create for each other.

One reply on “New Release: A Beautiful Day in the Neighborhood”

Excellent and thorough review. It’s very sensitive and shows an in depth consideration of many aspects of the story and filming.