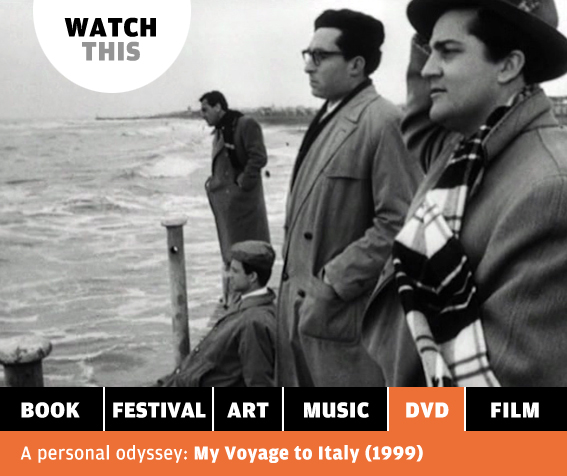 Martin Scorsese’s engrossing four hour documentary odyssey through the Italian films that played a large part in his cinematic education expands our own On Location feature into an all encompassing exploration of personal identity, history, ancestry, geography and changing national cultural, political and social climates.

Executive produced by Giorgio Armani and recently released for the first time on DVD, My Voyage to Italy acts as not just a celebration of one country’s film industry but also as an impassioned treatise on film-making as a whole. Scorsese’s documentary, filled to the brim with sequences from the films of Rossellini, De Sica, Antonioni, Visconti and Fellini is part genealogical exhumation and part showcase for the multitude of enduring films that have portrayed Italy’s turbulent emotional and physical landscapes. The language, architecture, historical incidents and cultural mores may be specific to the country but the themes the films, and Scorsese in his learned narration, touch on – war, love, faith, death, family and class – are universal.

From Visconti’s sumptuous melodrama Senso (1954), in which the last days of the Austrian-Italian War of Unification plays out amidst the aristocratic but shabby grandeur of Venice to De Sica’s neo-realist classic The Bicycle Thief (1948), in which a poverty stricken father and his young son search the streets of post-war Rome in search of their stolen property, physical environments are clearly shown to be as essential an ingredient to a film’s success as narrative structure, dialogue and performance. Naples, Rimini and the islands of Sicily and Stromboli, as much defined characters in their own right as physical spaces, play vital roles in films as diverse as Rossellini’s episodic World War II drama Paisā (1946), Fellini’s character study of small town life I Vitelloni (1953) and Alessandro Blasetti’s Sicilian historical epic 1860 (1934). Rossellini, whose influence on Italian cinema is seen throughout My Voyage to Italy highlights the importance of locations with his extraordinary use of Stromboli in the 1950 film of the same name. Stromboli‘s unforgettable climax on the slopes of the island’s recently erupted volcano, where Ingrid Bergman’s tormented Karin reaches some kind of transcendent inner peace, makes a dramatic, metaphorical link between inner turmoil and environmental upheaval. The country’s spaces (urban and rural, inland and coastal) alternately become playgrounds for the rich upper classes, inescapable poverty traps, battlegrounds for political ideologies and emotional conflicts and spiritually empty prisons in the hands of these esteemed directors.

With such a knowledgeable and genial guide as Scorsese, whose childhood in Little Italy, Manhattan surrounded by first generation Italian immigrants, many of whom didn’t speak English and fiercely continued their traditional Italian ways of life, sparked his lifelong interest in his ancestral home, My Voyage to Italy is rich in detail, finely poised between scholarly tutelage and personal anecdotes and never less than profoundly illuminating. Scorsese’s decision to bring the documentary to a close by discussing Fellini’s 8 1/2 (1963), a film about a film-maker retreating into memory and fantasy, shot on location in Rome and at the country’s most famous studio Cinecittā, perfectly wraps up his journey through roughly fifty years of Italian film-making, its themes and the faces and places that have thrillingly been brought to life on the silver screen.