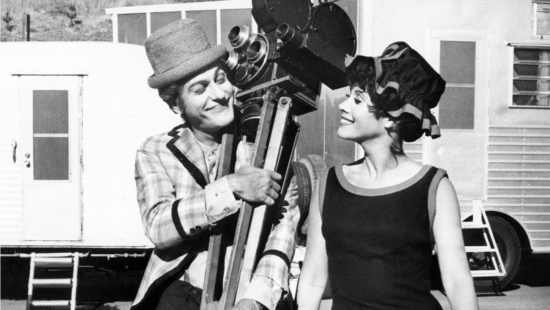 Comedian and director Carl Reiner’s second directorial feature-length film, The Comic (1969), starred Dick Van Dyke as a fictitious silent film era comedian, Billy Bright. Bright, an over bearing, egocentric comic, never reached the level of fame he believed he should have, always falling victim to the behavior of others like his wife (and co-star) Mary Gibson (Michele Lee), movie producers (Cornell Wilde), co-stars (Mickey Rooney) or agent (Reiner). As the years have gone by Bright has become a forgotten name in the history of cinema. The tragedy of the situation is that he lived long enough to see his star fade.

While The Comic could have been a biting Hollywood satire or a loving tribute to the silent era it is instead a continuation of one of Reiner’s favorite themes – an individual’s desire to become famous.

Half melodrama and half comedy, Billy Bright (an amalgamation of several silent film comedians) represents the dark side of fame. Reiner has twisted his innocent view of the desire for fame from Enter Laughing (1967), his semi-autobiographical feature-length directorial debut. It is with The Comic that Reiner shows the audience there is sadness just beneath the laughter.

One of the more inventive aspects of the film are silent comedy reenactments of Billy Bright’s output. These sequences, shot in black & white, provide Van Dyke the opportunity to show off his physical comedy skills. The sequences could have been in actual silent comedies.

These sequences established, acting wise, that The Comic was Van Dyke’s movie–with his performance as the most effective, and the character Billy the most developed. It was one of Van Dyke’s darkest performances despite his not fully leaning into it. Unfortunately, there wasn’t much chemistry between Van Dyke and Michele Lee. Much of that is due to the movie having little for the Mary character to do. The character could have turned into a Mabel Normand-ish character.

Presenting Billy Bright as a bad guy – an egomaniac, a womanizer, and an alcoholic – Reiner and The Comic could have asked, can a flawed man create great art? Reiner never directly asks the audience to consider this question. An example of this would be Woody Allen’s Sweet and Lowdown (1999). Allen’s film portrays an artist as a flawed man who is redeemed through his art.

The script by co-writers Reiner and Aaron Ruben feels inconsistent with the melodrama and comedy shifting dominance for the tone of the movie. More melodrama would have better exemplified what Reiner and Van Dyke wanted to achieve – a tribute to men like Buster Keaton and Stan Laurel, showing their struggles working in the Hollywood system, how badly they were treated afterwards, and their personal failings.

The Comic does have the ingredients of a great movie, however, even if it doesn’t always fully utilize them. Reiner was brave enough to present audiences with a movie without the typical Hollywood ending, exploring the dark side of our desire for fame and the bitterness that consumes us afterwards. Even a clown can shed a tear.