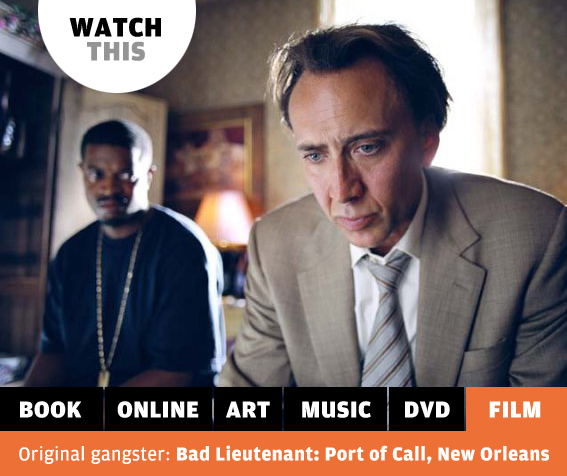 The awkward marriage between art and exploitation has rarely been more evident than in Werner Herzog’s latest exercise in cinematic dementia, Bad Lieutenant: Port of Call, New Orleans, a film that has been in UK distribution limbo for a while, but has been granted some time off for good behaviour with a screening at the 16th Bradford International Film Festival on March 27th.

The rather unwieldy title not only grounds Herzog’s episodic cop drama in a specific locale, but also serves to acknowledge its origins as a remake, or ‘reimagining’, of Abel Ferrara’s Bad Lieutenant, the New York auteur’s controversial 1992 cult classic which featured a fearless Harvey Keitel in the title role of a police detective drowning his Catholic guilt in cheap drugs and hard liquor whilst tracking down the violent youths responsible for the rape of a nun. Although undeniably an ‘Abel Ferrara film’ in terms of its gritty NYC aesthetic and themes of abuse and redemption, with the director working from a screenplay by his regular collaborator Nicholas St. John, the rights to the title remained with independent producer Ed Pressman who financed the $1 million production out of his own pocket. Pressman has recently been pillaging his back catalogue to generate projects with some brand recognition at a time of great economic uncertainty for the entertainment industry; The Crow (1994) is due for yet another ‘reinvention’, while Wall Street 2: Money Never Sleeps (2010) somehow seems both socially timely and artistically unnecessary. While the original Bad Lieutenant did not scale the same box office heights as those other Pressman productions, it did achieve sufficient cult status that news of another version prompted online outrage, despite the involvement of renowned maverick Herzog, while Ferrara refused to bestow his blessing on the production, insisting that new leading man Nicolas Cage would not be a poor substitute for Harvey Keitel. 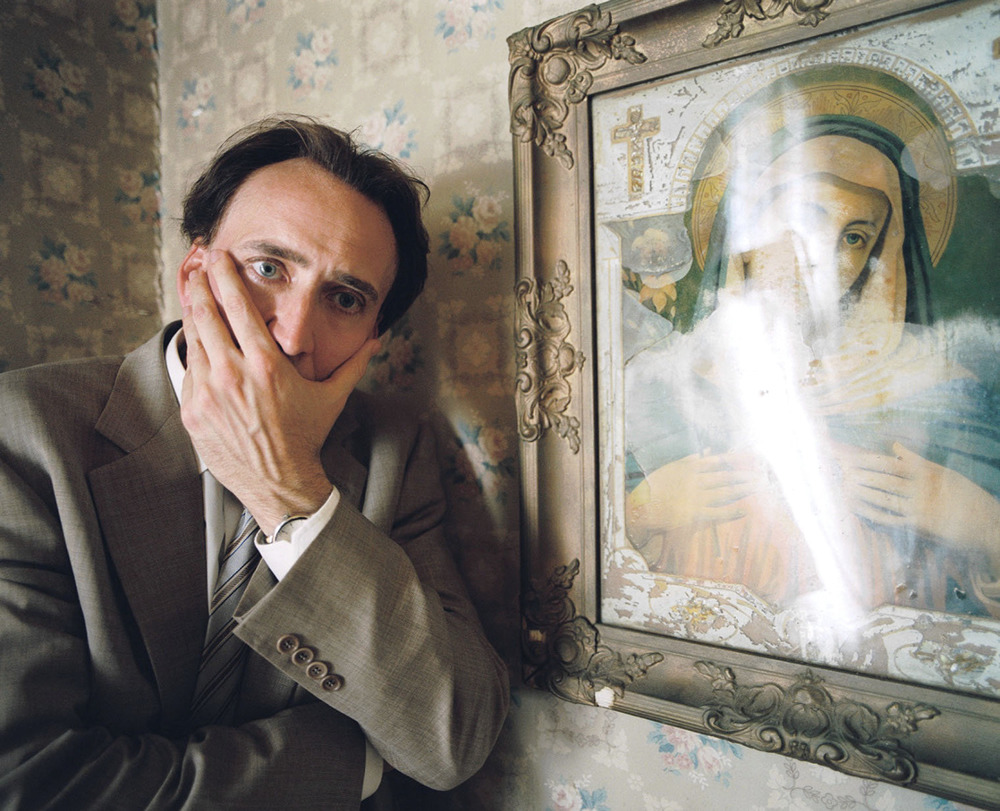 Prior to commencing production of his version of Bad Lieutenant, Herzog refuted Ferrara’s accusations of artistic theft by stating that he had not seen the original film, and actually wanted to change the title in order to avoid comparisons as he was working from a new screenplay by William M. Finklestein, a veteran of such television shows as Murder One (1995-1997) and NYPD Blue (1993-2005). Herzog’s claims are supported by his film, which has little in common with Ferrara’s, despite the presence of a drug-fuelled law enforcer at its centre; Herzog and Finklestein have dispensed with the rambling, almost documentary approach of Ferrara and St. John and provided their Bad Lieutenant with an actual narrative to navigate and a cast of supporting characters who are almost as unhinged as he is. When we first encounter New Orleans cop Terence McDonagh (Cage), he is rescuing a convict from a rapidly flooding prison during Hurricane Katrina, a selfless act which leaves him with permanent back pain. Six months later, Terence is snorting and smoking all the drugs he can get his hands on, hallucinating on the job as he tries to crack a murder case and maintain his personal and professional relationships; his girlfriend Frankie (Eva Mendes) is a coke-addicted hooker, his father Pat (Tom Bower) is a recovering alcoholic who struggles with tasks as simple as taking cookies to an AA meeting, his partner Stevie (Val Kilmer) has a tendency to assault suspects in the interrogation room and his bookie is coming close to cutting him off. Matters become even more complicated when Terence cuts a deal with local gangster Big Fate (Xzibit), exchanging inside information for pay-offs and cocaine, whilst operating on very little sleep and the threat of suspension due to his earlier harassment of an elderly lady in order to obtain the whereabouts of a murder witness.

Millennium Films, the production company behind Bad Lieutenant – Port of Call, New Orleans, is to the 2000s what Cannon was to the 1980s; a ‘B’-movie production factory with aspirations beyond its industrial function as a supplier of bottom shelf video emporium product and late night cable schedule-fillers, utilising the profits from such unashamed schlock as Raging Sharks (2006) to buy its way into the mainstream with projects like Brian de Palma’s adaptation of James Elroy’s The Black Dahlia (2006) and Sylvester Stallone’s forthcoming action extravaganza The Expendables (2010). As with Cannon heads Menahem Golan and Yoram Globus, who produced Andrei Konchalovsky’s Oscar-nominated Runaway Train (1985) alongside such action flicks as American Ninja (1985) and Death Wish 3 (1985),  the suits at Millennium are less interested in the final product than they are in the deals and the pre-sales that lead to it; their commercial pay-off for allowing Nicolas Cage to shakedown suspects has been to secure the star’s services for Drive Angry, a revenge thriller to be directed by Patrick Lussier, the genre ‘maestro’ responsible for My Bloody Valentine 3-D (2009). While they obviously wanted to bring Cage (a prolific and frequently popular box office draw) into the fold, and add some artistic legitimacy to their output by working with Herzog, the threadbare production values, cheap title cards and unremarkable faux-Cajun music score that permeate Bad Lieutenant – Port of Call, New Orleans suggest that Millennium were not particularly keen on equipping these established talents with anything approaching a substantial budget or post-production support. It was after working with this company that the late British director Donald Cammell committed suicide, partially due to their drastic re-editing of his sexually provocative thriller Wild Side (1995); somehow this did not deter Herzog from signing on the dotted line, although regularly collaborating with Klaus Kinski meant that he was probably not overly intimidated by the number-crunching producers of a ‘B’-movie production house. 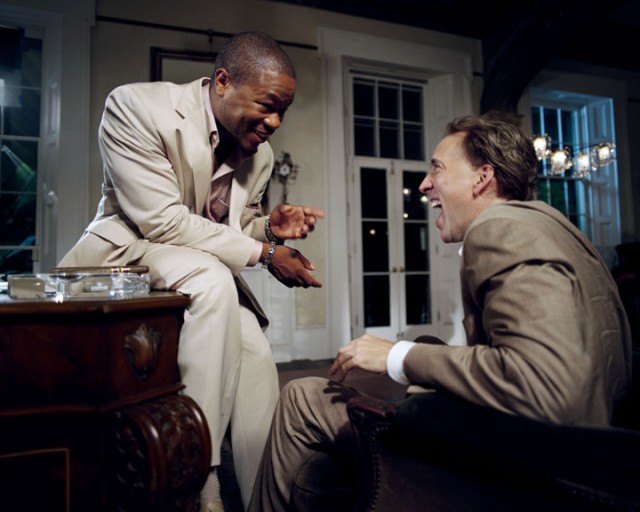 Despite its strange status as a film that is not quite remake, or ‘reimagining’, or easily distinguishable as either an arthouse or exploitation item, Bad Lieutenant – Port of Call, New Orleans is outrageously enjoyable for anyone who is up for the ride. Cage adds another oddball to his gallery of anti-heroes, although it should be noted that his ‘bad lieutenant’ is actually very good at his job; he manages to head-up a murder investigation whilst outwitting the gangsters who want a piece of his girlfriend’s ‘action’ and negotiates further credit with the bookie who wants to call in his marker. It is never entirely explained how the titular protagonist manages to go from taking pain killers for a bad back to running around on a cocktail of crack, coke, heroin and marijuana within a six month period, but Cage’s performance manages enough humanity amidst the depravity to make for a credible portrait of a good man with some very bad habits. Even the cheap aesthetic, which is reminiscent of the erotic thrillers churned out by Gregory Hippolyte in the 1990s, serves to enhance the lurid, low-budget ambience and suggests that, if they can secure suitable talent for future instalments set in other major cities, Millennium may have found themselves a new franchise to file alongside Cyborg Cop (1993-1995), Spiders (2000-2001) and Shark Attack (1999-2002) in their ‘enviable’ back catalogue.