When we think of films addressing devastation and disaster, graphic imagery replete with dramatic plotlines are what first come to mind. From tension-filled, post-apocalyptic sci-fi to explosion-ridden war films, the theme of suffering becomes upscaled and unrealistic. Films that carry the highest emotional impact of destruction tend to be subtle and artistically experimental, like Schindler’s List (1993) or 1917 (2019). Hiroshima Mon Amour (1959) is a poignant example of the recovery of hope after total annihilation; the poeticism of Marguerite Duras’ screenwriting and boldness of Alain Resnais’ vision layer the weight of personal loss with the cruel facts of war. 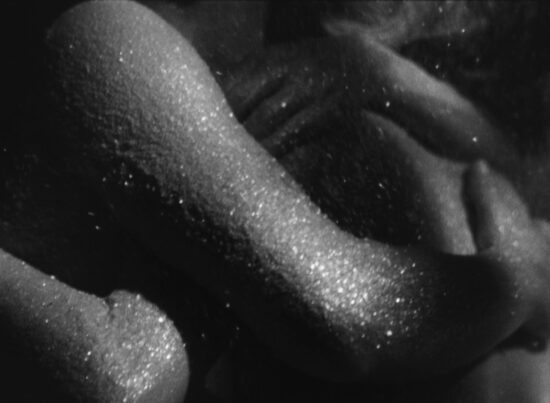 In the opening, covered in glittering ashes, a hand caresses a naked body as a woman’s soliloquy begins, recounting the hospital, the museum, the scorched metal, the “anonymous masses of hair,” and the peace square with “the temperature of the sun” in Hiroshima. At each turn of the description, a male voice says, episodically, “You saw nothing in Hiroshima”. Along with their dialogue, a montage of focuses on all of the radiation-charred bodies and ravaged landscape. The dream-like imagery vividly echoes the 1929 surrealism film Un Chien Andalou: a directionless journey melding memory and reality.

French actress Elle (Emmanuelle Riva) meets Japanese architect Lui (Eiji Okada) during her rehearsal of a peace film. As their transient relationship deepens, Elle laments the death of her German lover while she was a young girl in Nevers, Vichy France during WWII.

Hiroshima Mon Amour is the realization of two visionary artists: Marguerite Duras through her stylistic nouveau roman screenplay and Alain Resnais through his documentary montage. Originally, Resnais was commissioned to create a documentary film on the aftermath of the nuclear bomb. However, he eventually decided to create a love story casted under the shadow of a ravaged and reconstructed Hiroshima. Nevertheless, the features and charms of a documentary are still there: in one scene, Elle walks the streets of Hiroshima as the camera cuts to Nevers in each turn of the street, like the calm, horizontal shots of a documentary. Clean editing transports the audience to the memory of a character (Lui’s hand becomes Elle’s lover’s hand after a gunshot wound), so the audience also experiences that emotional pain.

Emmanuelle Riva, who had only theater acting experience, portrays the emotional pain and unravelling of Elle exceedingly well. Her contained demeanor only contrasts so well with the later uncontrolled mental breakdown. Despite being his first feature film, Hiroshima Mon Amour had brought Resnais international acclaim and accreditation. Resnais won the New York Film Critics’ award for Best Foreign Film and Marguerite Duras was nominated for an Academy Award for her screenplay. Hiroshima Mon Amour ushered in the modern film and helped introduce the world to French New Wave, the artistic effects of which continue to ripple across decades of cinema.