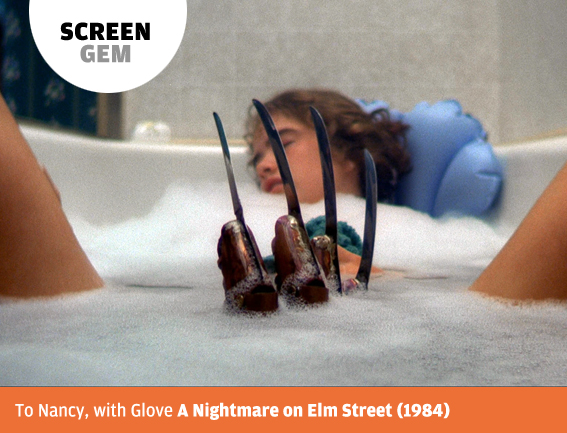 Gloves are an intensely intimate item of clothing, used to protect one of the most expressive and personal body parts – from cold, from hurt and from unwanted attention. A Nightmare On Elm Street – the seminal 1980’s horror film from schlockmeister Wes Craven which changed the teenager-in-peril franchise forever – transmogrified the glove into an object of terror in the form of the blade fingered gauntlet used by the pizza featured bogeyman Freddy Krueger.

The glove, perhaps even more than Kruger, was the star of the show. It is the first thing the viewer sees during the opening pre-credit sequence – as the obscured Freddy lovingly forms, sharpens and attaches each blade to each finger, before slipping it onto his hand, two separate elements of danger becoming one entity of evil incarnate.

Themes of intimacy and the nature of invaded privacy run deeply throughout the film with many of the character and plotlines stemming directly from director Wes Craven’s personal experience.  Fred Krueger had been a real-life bully from Craven’s schooldays, whilst he got the idea of people dying in their dreams (generally considered an individual’s most personal and private ‘space’) from newspaper stories of people who had died in the throes of horrific nightmares.

Once Freddy’s deadly new appendage has materialised, firstly in Nancy and her friend’s dreams, and then in reality as they unwittingly bring Freddy and his glove into our world, there seems no end to its sadistic and often sexualized reach. From molesting Nancy in her bath to giving her boyfriend Glen (played by a young Johnny Depp) a gruesomely literal “wet dream”, the bladed appendage seems to take on a life of its own. As the films evolved through numerous sequels, so did the glove, the blades transforming into syringes to give one druggie teenager the ultimate high, whilst controlling another like a puppet master’s hand only to cut the kid down mid act.

Crucially Freddy was only a dream – he never really existed. The glove, on the other-hand, could – and this is what ultimately makes it the stuff of waking nightmares.