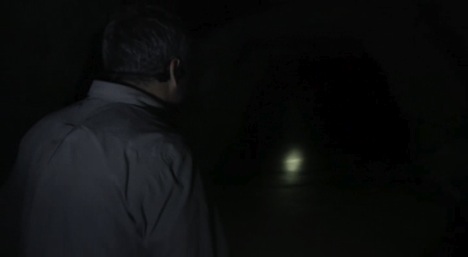 It’s become somewhat of a British horror tradition to have a plot based around local country bumpkin-satanist types. Elliot Golder’s found-footage debut The Borderlands, with its unfriendly villagers and sheep-burning teenagers, certainly looks as if it’s going that way. It’s quick to pay homage to Kill List (Ben Wheatley, 2011) but swiftly skirts the local cult plot before heading towards a claustrophobic finale reminiscent of Neil Marshall’s The Descent (2005), complete with a unique and genuinely disturbing flourish.

Catholic priest Mark (Aidan McArdle) was last seen dead and has somehow disappeared. Gray (Robin Hill) the techie and Mark’s fellow priest, Deacon (Gordon Kennedy), make their way down some stairs and follow a passage that takes them under the church. The ever-claustrophobic, shaky POV shot with limited torch-lit vision raises the anxiety levels. 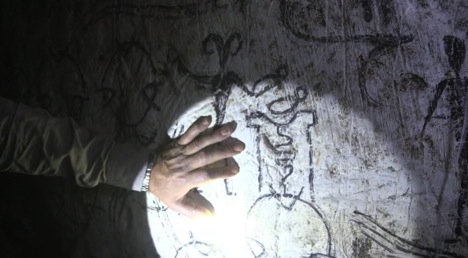 They come across some creepy relics. Paintings on the walls depicting child sacrifice, skulls and an altar all bolster the supposed village-weirdoes cult theme that past British horrors have taught us to expect. Things don’t seem quite right though when presumed-dead Mark sporadically appears at the end of a series of grubby passageways. 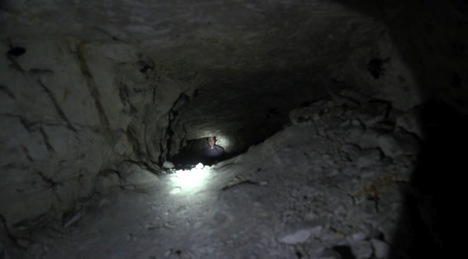 Will-o-the-Wisp Mark leads them deeper into the bowels of the church. The two come across an unusually round tunnel and proceed. The audience knows that this is not the real Mark luring them onwards, and that this passageway is a bad idea. What’s at the end? Surely a collection of villagers chanting and sacrificing babies around an altar a la The Wicker Man (Robin Hardy, 1973). The two become wedged and their exit disappears. The camera points down the tunnel, and – it contracts. The sides move and start secreting flesh-burning acid as we realise our two protagonists are in the literal bowels of the church. They scream and repeat the Lord’s Prayer as they are slowly digested. 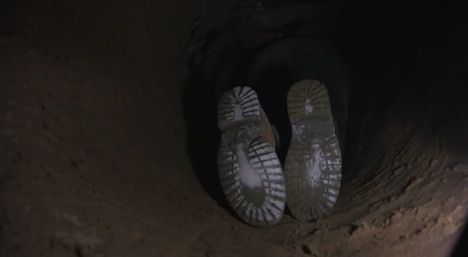