In the plethora of coming-of-age movies that dominate the pop culture scene, teenagers are portrayed as glamorous and composed mini-adults. From as far back as High School Musical (2006) to as recent as To All the Boys I’ve Loved Before (2018), teen romance often is depicted as shallow and picture-perfect, which is fine for audiences seeking a fantasy escapade. But in the rare instances when a film exposes reality, it leaves everyone walking away feeling awe-struck and understood. And with a new perspective on the life they are living. The Half of It (2020) is one of those rare gems of film, probing and conscientious, with a refreshing take on the teen years.

In the remote town of Squahamish, the high-performing but invisible Ellie Chu (Leah Lewis) earns money by writing essays for other students as she and her father live in limbo after her mother’s death. Her predictable life changes when the bashful footballer Paul Munsky (Daniel Diemer) pays her to write a love letter to their classmate Aster Flores (Alexxis Lemire). The series of love letters deepens the bonds between Paul and Aster, but Ellie also realizes her investment in the relationship. The façade falls apart in unexpected ways when Aster’s boyfriend Trig Carson (Wolfgang Novogratz) proposes to her in the church.

It is clear that the director Alice Wu has a strong intuition of hue. The color scheme of each scene is permeated, but not saturated, with suffused light. The natural lighting brings out just the right amount of clarity that makes every moment conventional as opposed to forced. Because of this, the stages of each character’s relationship development flows. 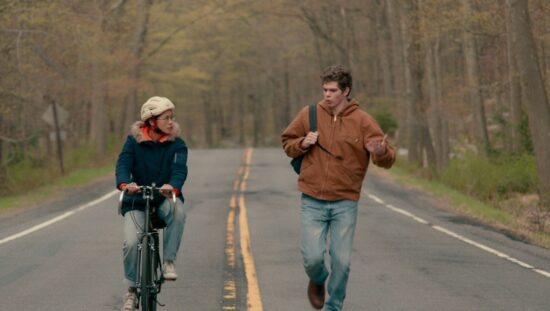 Take, for instance, this scene at the start of the film. Ellie and Paul are working out a plan to get closer to Aster. Their costumes have a subdued and faded color, and the woods behind them are obscure and clouded. Yet the yellow line on the road lightens the atmosphere and sets the organized composition of the frame. 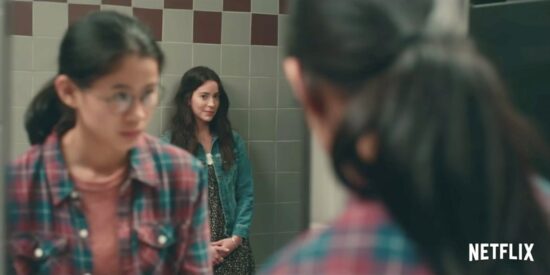 Even though Ellie and Aster barely know each other, Wu wants to highlight their mutual connection in this cut. Spots of blue square on Ellie’s costume correspond with Aster’s jacket of the same color. The direction of their visions implies a tilted angle that contrasts with the patterned square wall. 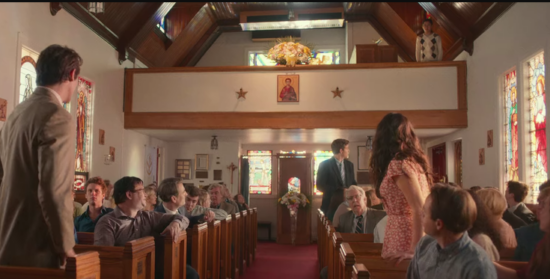 When everything falls apart, Wu shows the tension in this interesting angle. In the middle are the three characters who make up the love triangle. The light shines fully on them, but the audience all look toward Ellie, who stands in the shadowy corner. This composition is a ingenious take on the plot, with the middle three characters in the public eye and Ellie pulling the strings of the drama.

In several artistic montages, Wu supplies the conversation in the love letters with stunning visuals. The words rival each other until, at last, a brilliant painting emerges. The words are all cold colors, which make the drawing surprising and eye-catching. The mural scene perhaps best represents Wu’s spark of illumination and insertion of light into an otherwise gloomy plot point.