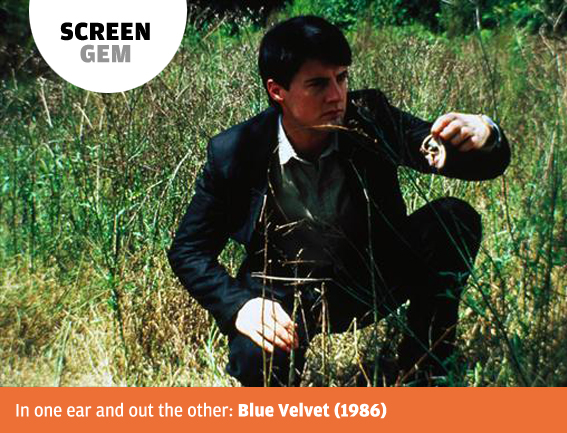 A word in your shell-like: when you take a walk around Lumberton USA keep your eyes peeled and your nose to the ground. You never know what you might find lying around. In David Lynch’s Blue Velvet young Jeffrey Beaumont (Kyle Maclachlan) stumbled upon an opening to a strange world in the form of a severed left ear.

The lopped-off lug in question turns out to belong to Don Vallens (Dick Green), husband to nightclub singer Dorothy (Isabella Rossellini) and father to Little Donny (Jon Jon Snipes). We find out that both Don and Donny are captives of the monstrous Frank Booth (Dennis Hopper) who has kidnapped them in order to force bizarre sexual favours from Dorothy. After the mind-scarringly horrific rape scene Frank, in reference to Don, demands of Dorothy: ‘You stay alive baby, do it for Van Gogh’ with all the emotional warmth of an Antarctic ice pick.

When Jeffrey finds the ear he does the decent thing; into a little paper bag it goes and it’s off to the local police station so that he can turn it over to the Law. Worldly-wise Detective Williams (George Dickerson) proves his formidable powers of deduction when peering at the contents of Jeffrey’s paper bag; ‘Yes, that’s a human ear alright’ he declares. No shit Sherlock.  If you’ve seen Blue Velvet at the cinema you’ll know that this is usually the first laugh that the film elicits from its audience. It’s a sort of nervous laugh; it is after all a fairly horribly hacked off body part but the incongruity is curiously humorous.

Even more gruesomely amusing is the next scene where we see the workaday police forensics guy prodding the ear around a sterile metal tray with the end of his pen. ‘It looks like it was cut off with scissors’ he calmly informs Jeffrey and the detective. Some bad barber; there are loops of dark, wispy hair still attached to the ear’s ragged edges. This is Lynch employing the classic surrealist motif; an isolated yet symbolic found object, the discovery of which triggers change. When Jeffrey first finds it in the field it is crawling with ants, reminiscent of similar shots of ants on body parts in Un Chien Andelou (Luis Buñuel, Salvador Dali 1929).

The next time we encounter the ear it is in extreme close-up, with a slow shot that penetrates its cartilaginous curves and inner recesses. We see this just before Jeffrey visits Detective Williams at home, a visit that kick-starts his fascination with the case and his entry into the murky world of Dorothy and Frank. It is as if we the viewers have entered the head of the film via the ear, and once in there we know we’re going to have a dark and disturbing time of it before we emerge out the other side.

We do eventually encounter the ear’s former owner, albeit post mortem. Jeffrey discovers Don tied to a chair in Dorothy’s apartment, where we can see that Frank has plugged his mouth with a length of blue velvet before shooting him through the head. We can also see the livid, dried up gash on the side of his head where that ear once was. The bound and gagged corpse once again presents us with a dilemma; his frozen, contorted form is freakishly comic and yet seeing the static after effects of the violent act is somehow more horrible than any attempt to show his torture and death occurring could ever have been.

At the end of the film we pull back out of Jeffrey’s right ear as he lounges peacefully in his parents’ back garden, thereby completing our journey in one ear and out the other. The world is a bright place again but we’re left thinking that internal darkness is still there, hiding in Jeffrey’s head. In our head.

The prop ear – it wasn’t a real ear, Lynch is weird but not that weird – allegedly popped up again on screen, in the stand-alone pilot episode of Twin Peaks. That’s it atop a mound of earth surrounded by twelve candles in the basement where Mike kills BOB. Lynch had kept it, wrapped in plastic in his trouser pocket. It’s still doing the rounds, recently featuring in the Persol Magnificent Obsessions travelling exhibition. Those strands of hair, it turns out, were some of Lynch’s own locks. Maybe he is that weird.