A Big Wheel tricycle. The epitome of American 1970s childhood; a bastion of good, clean fun and innocence, and staple toy of choice for the all-American kid. To see it is to imagine wide, tree-lined streets, fresh air and mom’s laundry drying out in the sun. Yet here, in Kubrick’s Overlook Hotel, the tricycle is reimagined as a horrifying symbol of malevolence. It becomes an inverted image of childhood; a spinner of suspense, a possessed vehicle of ill-intent and a symbol of psychic terror.

Yes, baffling and disturbing in equal measures, Kubrick’s chilling psychological horror The Shining has generated critical analysis and interpretation like no other. Last year’s feature-length documentary Room 237 spawned a fresh flurry of interest, and new theories – ranging from the bizarre to the benign – were discussed at great length.

Moon landing and holocaust reference theories aside though, what really lies at the core of The Shining is a question of perspective and expectation. It is an elaborate and very psychological game of cat and mouse: father, son; hunter and hunted. But who is the hunter, and who is being hunted? What does the audience expect when they think of representations of the family and childhood in cinema?

There are two episodes involving the tricycle before Danny is finally confronted with the Grady sisters. The first instance is an elongated scene. Our expectations are cleverly manipulated – there is nothing around the corner, yet we anticipate each turn with dread. Sound design is used to great suspense-building effect as Danny speeds over hardwood and carpet on his tricycle.

The second time, Danny stops outside Room 237, seemingly led there on his tricycle by some force. Again, nothing happens and he scoots off, this time leaving the now-predatory camera loitering in the hallway outside the room. 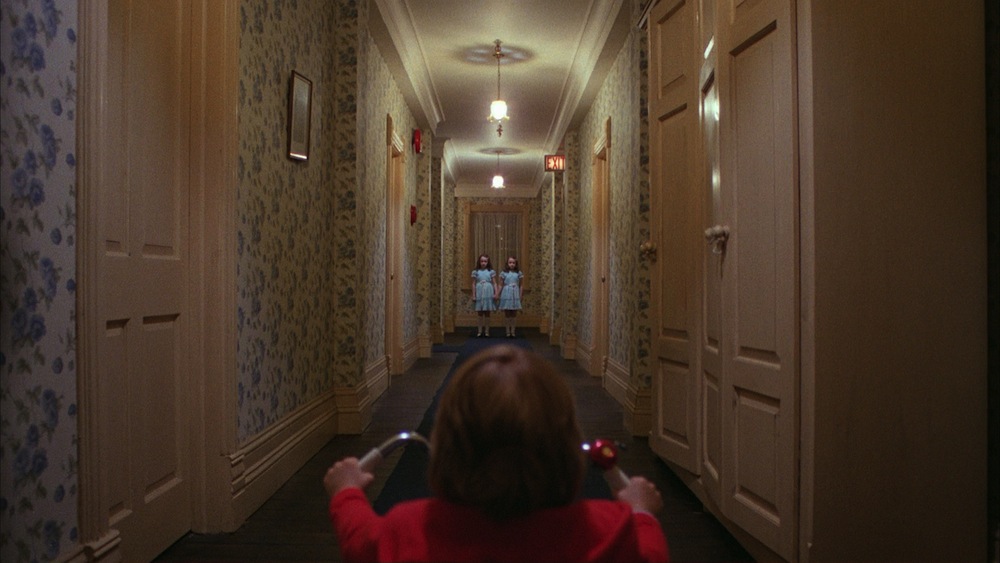 In the third and final episode, Danny speeds along, closely tracked by the camera. This time the camera holds back as Danny spins round a corner, as if reluctant to show what lurks therein. When it does finally catch up, we are confronted with a distressing sight: Danny on his tricycle – that archetypal image of a child at play – cruelly juxtaposed with a vision of the massacred Grady sisters in the hallway, an image of ruined childhood and horror.

Rather than an icon of youthful abandon, the tricycle has now become both a manifestation of innocence gone wrong and a tool for propelling Danny deeper into the bowels of the Overlook Hotel. It epitomises everything that is unnerving about The Shining, which is the inversion of our established expectations: the family becomes a source of violence, childhood is destroyed, the ‘home’ breeds malevolence – and a tricycle becomes an iconic embodiment of all of this; a terrifying distortion of all that should be good and nourishing. Look at that Big Wheel tricycle now. What do you see?