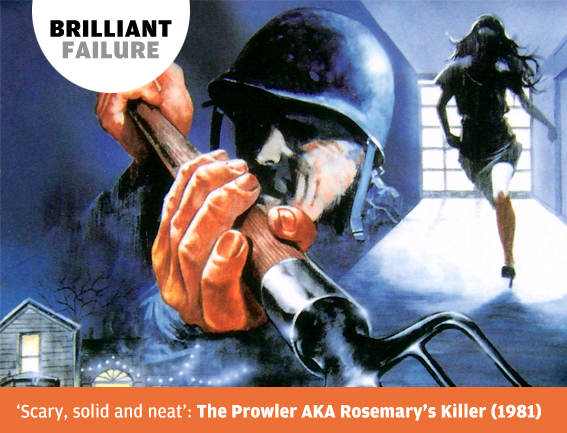 I imagine few of those who made The Prowler, and few of those who have seen it, regard it as either brilliant or a failure – and yet it warrants inclusion in this series as much as any movie we have featured. The Prowler (which is available on Region 2 DVD under its alternate title, Rosemary’s Killer) is, for most of its running time, a shocking and grizzly slasher film that delivers precisely what those who choose to watch it expect to see.

But, had it followed the inspiration evident in its early sequences, and risen to the standard of its special effects, it could have been a classic.

The film opens in 1945. We see, and hear, a Dear John letter. Someone – and, we suspect, it is someone who won’t respond well to the situation – has returned from the Second World War to find himself single, and his ex in someone else’s arms. We’re in Avalon, New Jersey, and an array of wealthy and well-dressed teenagers are attending their annual spring ball. A couple sneak away, and seem about to have sex, when a figure in US Army battledress, his face obscured, ensures they are bonded even more intimately than they expect – by driving a pitchfork through them both.

It is a fascinating set up, taking the conventions of the slasher subgenre and transplanting them to an earlier era. The sexual morality of the slasher film (the promiscuous are murdered; the virgin survives) would generate an intriguing plot if applied to the years immediately post-war. Then, the reserved attitudes of the interwar period were still in place but, especially among the young, they had begun to be irreversibly corroded. For teens who felt they might, at any moment, be conscripted and, at any moment after that, be annihilated, the inducements to wait until they were married to sleep with their girlfriends had become unconvincing.

Furthermore, a slasher movie killer who had believed in waiting until marriage, even though he was heading to war, only to return from it and find his girl had slept with a wealthier boy who had been able to avoid the draft, would have had a fresh and relatively complex motivation for his murders. His story would have presented a new slant on the slasher.

As would the look of the period setting. The costumes, cars and decoration in the first spring ball scene are – for a film of The Prowler‘s type and time, and made with the budget limitations inherent to them – strikingly impressive. If maintained throughout the film, they would have ensured Joseph Zito’s picture looked far fresher today than it does. The standard contemporary settings of the late-1970s and early-1980s ensures slasher films often age poorly – but films set in the past are far more likely to look timeless in the future. 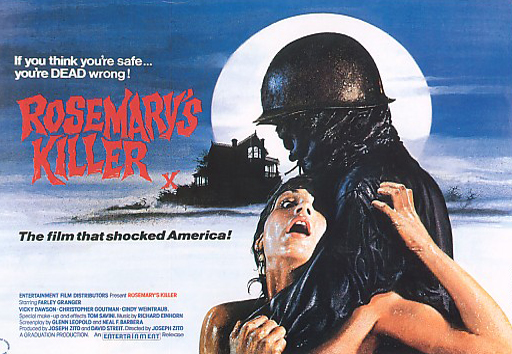 Unfortunately, The Prowler only stays in 1945 for 15 minutes. After that, it flashes forward to 1980, when the expected assembly of teenage victims-in-waiting are preparing for Avalon’s first spring ball since that accursed evening 35 years before. For the remainder of the movie, things go as we would imagine.

This is not to say that The Prowler is poor. Overall, it is an above average film of its type and, at times, it is an excellent one. It deserves to be remembered and re-watched by slasher film fans. It does not, though, deserve mention alongside the classics of its kind (Halloween, Friday 13th, A Nightmare on Elm Street) that have transcended their subgenre and become more mainstream horror hits. Had it stayed in – and fully exploited – its original 1940s setting, it would have.

The film has flaws beyond the decision to move its action out of the 1940s. As a murder mystery The Prowler is immensely murderous – its chief trouble is that it isn’t really mysterious. The identity of the killer is so simple to spot we assume we’re being deliberately misled, and are then disappointed by the dull realisation we aren’t. We simply aren’t intrigued by the plot and so, though we have enough invested in the agreeable girl played by Vicky Dawson to care greatly about whether she remains un-slashed, we don’t have enough invested in the film’s mystery to care greatly about the revelation of the stalker’s identity (as we do, for example, in the previous year’s Prom Night).

The film also has strengths outside its opening quarter of an hour. One of those who made The Prowler and may well regard his part in it to be brilliant is special effects expert Tom Savini. Savini, whose work is as integral to our understanding of slasher movies as that of John Carpenter, Sean Cunningham or Wes Craven, considers his efforts here to be the best of his career.

As with all claims of this kind, whether or not it is true is actually immaterial: what matters is that the gruesome SFX the Godfather of Gore showcases in The Prowler are ingeniously designed and executed, and would make the film worth watching even if its every other element was execrable. (Savini’s sequel to Psycho‘s shower scene, for example, is as unforgettable a goring as can been seen in any horror film.)

The Prowler is scary, solid and neat. It occasionally unleashes bursts of brilliance, and occasionally bursts of boredom. It displays both inspiration and laziness. It demonstrates tremendous potential – and seldom capitalises upon it. It is, in short, a brilliant failure.

1000 Words: Slash and Burn: How Halloween Lit the Fuse for the Slasher Explosion in The Big Picture Issue 8