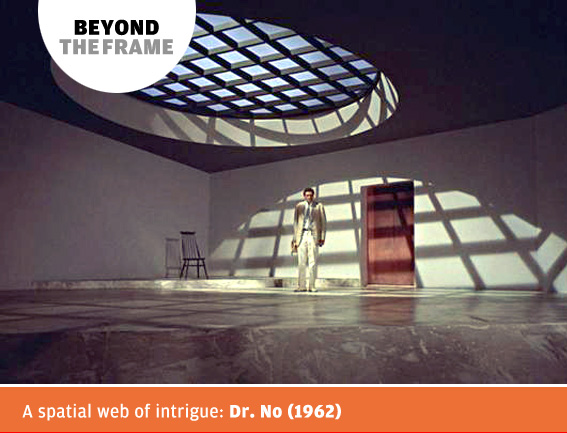 “You know, we need a set for that”. This reminder from director Terence Young to production designer Ken Adam during the making of Dr No not only resulted in a hastily-conceived yet brilliant solution from Adam for the ‘spider room’ – a small space dominated by a disquietingly sloping, forced-perspective roof whose circular grille casts ominous shadows – but also laid the foundations for a series of designs that, if realised in bricks and mortar, would surely have seen the German-born artist crowned a post-war architect of some talent.

By 1962 Adam was already a seasoned professional, having designed for the cinema since the late 1940s when he left the Royal Air Force. Though he worked across genres, it is the very particular look he developed for seven Bond films that is his legacy in film. 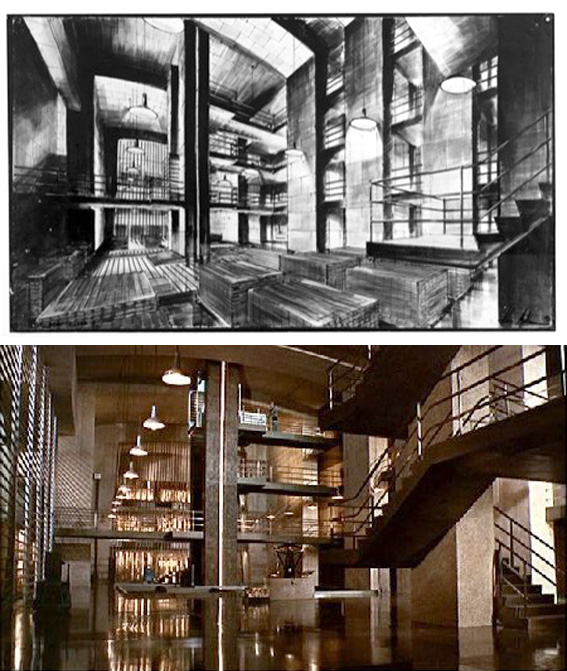 Top: Adam’s sketches for the Fort Knox set Below: The final constructed set

Undoubtedly informed by study of architecture and employment in a British practice before the war and his experiences piloting the snarling Typhoon fighter-bomber during it, Adam’s philosophy blended extravagant technology with a dramatic and often unsettling use of geometric forms. Rightly celebrated for audaciously grand constructs, whether Blofeld’s volcano, Stromberg’s tanker or the vaults of Fort Knox, each film also contains more intimate spaces that are equally worthy of attention. Common elements such as ramps, bridges and open-tread staircases and a concern for finishes tie all these projects together.

The offices of Osato Chemicals in You Only Live Twice are an exquisite nod to traditional Japanese architecture updated for Western tastes, with sliding screens, finely-crafted woods and clean lines, all in a sympathetic palette of colours. Willard Whyte’s penthouse in Diamonds are Forever is a carefully-orchestrated symphony in chromed steel and glass with activity in every plane, from the chandelier in the ceiling to the picture window and eye-like wall safe to the model landscape set into the transparent floor. Circles feature heavily.

Adam’s work here shows a real sympathy for the Panavision frame, although he has admitted to the current writer a preference for films shot in Academy. In fact his Bond sets tend to fit the picture space perfectly, regardless of its proportion. Ceilings are low and often canted; floors separate into layers, reflecting the ‘60s fashion for split-level living and conversation pits; end walls are usually shown, often defined by a window. 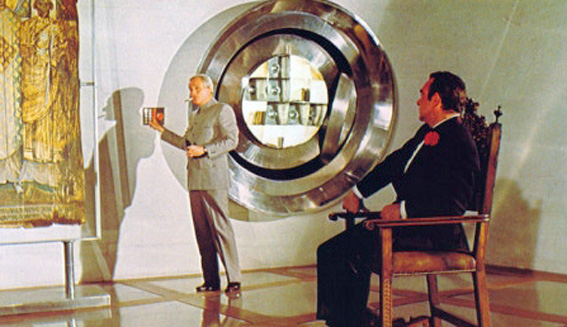 Top: The Elrod House as used in Diamonds are Forever Above: Blofeld’s penthouse

Adam has an intelligent eye for actual architecture as both inspiration and location. Goldfinger’s rumpus room, with its angled structural members, rubble walls and exposed timber, is clearly influenced by the great Frank Lloyd Wright’s Taliesin West home and studio. In Diamonds are Forever the Las Vegas Hilton is extended by a matte painting to become The Whyte House, whilst the wonderfully sculptural desert dwelling in which Bond does battle with Bambi and Thumper may appear to be classic Adam but is in fact the Elrod house by noted California architect and Wright disciple John Lautner, who will feature in a forthcoming ‘Beyond the Frame’. In The Spy Who Loved Me, the soft curves of Stromberg’s Atlantis have affinities with the organic 1970s designs of Luigi Colani.

These spaces exist between reality and fantasy, thrusting Expressionism into the Swinging Sixties to generate a world perfectly matched to an aspirational audience and the new architecture they saw emerging around them.