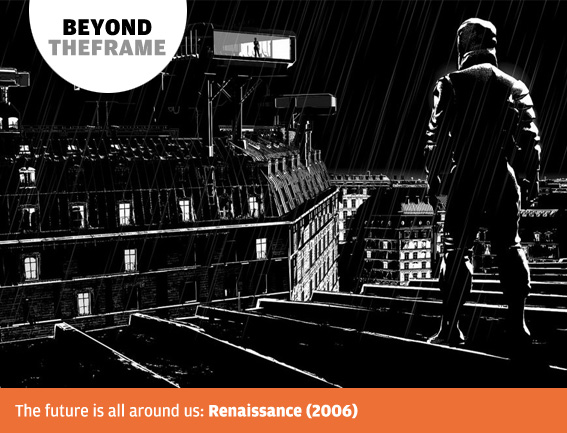 Depiction of the architecture of the future is the ultimate expression of the relationship between cinema and the built environment. Credible realisation on film required budgetary and technical restrictions to be overcome, but also an awareness of actual architectural achievement and an understanding that the distance between the present and any projected future is rather greater than commonly imagined. As such, designers began by borrowing structures from the real world.

The exterior and reception area of the euthanasia complex in Norman Jewison’s Soylent Green were filmed at the Los Angeles Memorial Sports Arena, an elliptical, covered hall whose Jetsons styling dated from the 1950s but still fitted ideas of ‘futuristic’ well over a decade later. The Arena’s architect was Welton Becket, who also designed the radical, A-framed Contemporary Tower hotel for Disney World Florida in 1971. With its sloping sides and the resort’s monorail train actually passing through the lobby, the hotel is an obvious influence on the buildings of the domed city in Logan’s Run, released five years later. 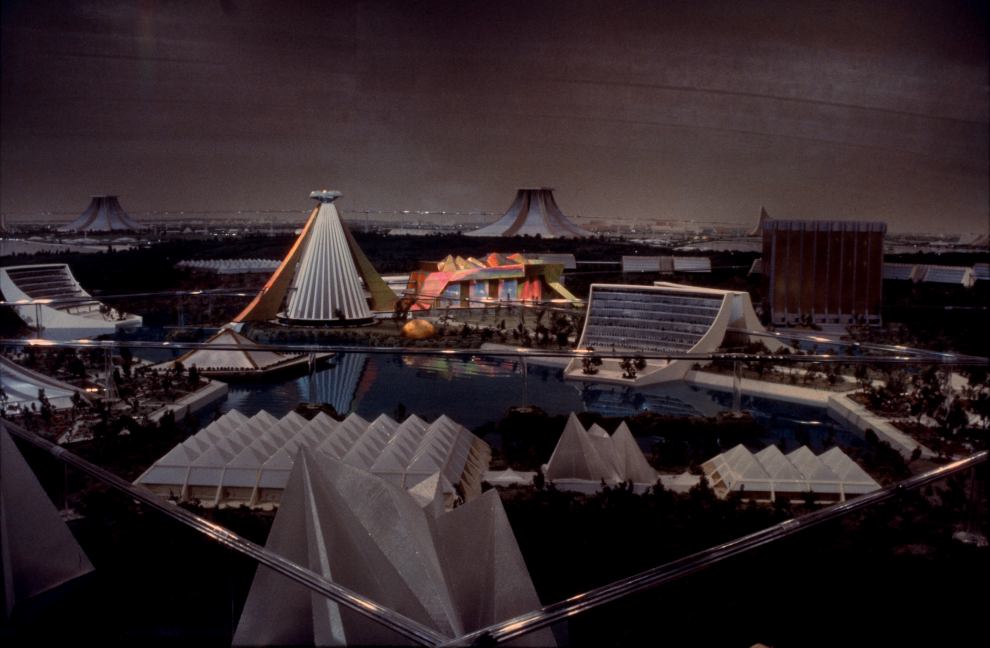 Interiors for the film were shot at Dallas Market Center’s now-demolished Apparel Mart, whose textured, almost rustic wall surfaces leant a slightly eccentric look and avoided the slick smoothness normally encountered in such portrayals. More of that city’s architecture informed the future a dozen years later in RoboCop. Detroit’s City Hall was in reality that of Dallas, designed by Chinese-American architect I.M. Pei less than ten years before the film was made, persuasively extended into a tower via a matte painting.

One of the most fully convincing pieces of future architecture in cinema is entirely fictional, but still borrows recognisably from the real world. The knife blade-like, 108-storey headquarters of US Robotics in the Chicago of 2035 in I, Robot was created by production designer Patrick Tatopoulos. It has a lofty principal atrium, a secondary atrium running the full height of the building and a glazed executive office at the summit, all common in today’s commercial buildings. Even the mechanical garage in the basement draws on present-day automatic parking systems. Accurate simulation of familiar materials, including fair-faced concrete, frosted and clear glass and aluminium mullions for the cladding, aids the effect.

Equally credible cities rather than individual buildings began to appear from the 1980s. The settings of films such as Akira, Cypher, Ghost in the Shell, Vexille and Minority Report were rendered far more realistic through referencing the real-life building boom that was beginning in the Middle and Far East. But they remain generic; only a handful of science-fiction films have succeeded in creating a specific and original mood with their architecture.

Stallone’s Judge Dredd anchors itself in classic-period 2000AD strips more fully than is commonly believed, with a skyline of distinctively-profiled, sculpted City Blocks. Twenty five years later, Dredd made a virtue of its much lower budget by emulating the townships and suburbs of South Africa where it was filmed and the banlieue of France for its Mega-City One, a Corbusian grid of near-identical rectilinear towers.

The richly textured, multi-layered Los Angeles of Blade Runner is rightly regarded as perhaps the most thoroughly convincing futurescape ever seen in film. This is achieved less through technical facility – though that is exceptional – than through extremely close attention to real architectural history. Extrapolating from this gave a simulated future that appeared to have sprung from a lived past and a believable present. As a result even the overtly futuristic Tyrell pyramid remains credible today. The fascinating process by which this was accomplished is explored in depth by the present author in one of a series of online pieces marking the film’s 30th anniversary.

Similarly absorbing is the portrayal of Paris in 2054 in Christian Volckman’s animated Renaissance. Less a projection and more an imagining of the existing city as it might have been, this also borrows heavily but carefully from the city’s buildings as well as the work of Belgian graphic novelist François Schuiten, who does much the same in his own art. It assumes Haussmanian apartment blocks crowned by winter gardens of iron and glass clustering the slopes of Montmartre, the Seine deeply canalised with its quays glazed over, and cavernous Metro stations with sweeping iron staircases onto the platforms. In contrast the headquarters of pharmaceutical corporation Avalon describes a graceful, vertiginous arc over the La Defense business district, its executive office a glazed box slung beneath, like a tautly-strung bow.

Ironically developments over the last ten years in computer-aided design, structural analysis and materials technology have allowed construction of the kind of buildings once found only in the more fanciful science fiction films.

It is now architecture that has stepped beyond the frame.