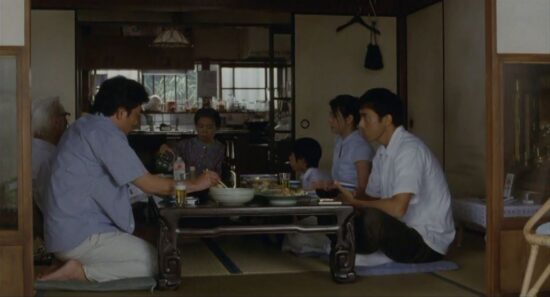 Hirokazu Kore-Eda’s Still Walking (Aruitemi aruitemo, 2008) starts with two women preparing a meal, the older woman giving advice to the younger one. This first long sequence sets the tone of the film and signals the filmmaker’s emphasis on everyday life, which is supported by the narrative and by other aesthetic means. Depicting twenty-four hours in the life of a family, the film contains many scenes dealing with the preparation of food and with eating and showing the family reunited around a table for lunch or dinner, a very conventional setting in films revolving around close interpersonal relationships.

Once a year, the members of the Yokoyama family gather at the home of the parents – Toshiko (Kirin Kiki) and Kyohei (Yoshio Harada) – to commemorate the death of Junpei, their eldest son, who died twelve years ago. The daughter, Chinami (You), the younger woman in the first sequence, is married and has two children. Ryota (Hiroshi Abe), the other son, has recently married Yukari (Yui Natsukawa), a widow with a child. In Masaki Kobayashi’s Family Without a Dinner Table (Shokutaku no na ie, 1985), it is the son’s terrorist activities that lead to the destruction of a family in which relationships are already strained. In Kore-Eda’s film, conflict seethes below a surface of normality, erupting only occasionally in acid remarks.

In long static sequences, everyday topics and family matters are discussed, revealing barely suppressed emotions and secrets: the mother’s prejudice against Ryota’s wife, convinced she has remarried too soon after her first husband’s death; Ryota, who conceals the fact that he is unemployed; his wife’s nervousness at meeting his family for the first time. During the family reunion, these and other problems continually surface. Yukari complains that her son Atsushi (Shohei Tanaka) is treated as a guest rather than a family member by Toshiko; Toshiko offers a kimono to her daughter-in-law but at the same time suggests to her that it might be better for Atsushi if she and Yukari do not have children. Ryota’s frustration about being unable to find work is reflected in his noticeable restlessness. His brother-in-law, Nobuo (Kazuya Takahashi) – a car salesman – is also unsuccessful in his job. He and his wife would like to move into her parents’ home but are unable to convince them to agree to their plans. 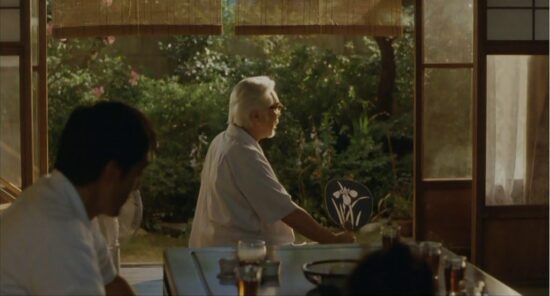 The spirit of the past lingers in the parental home. Kyohei Yokoyama, a retired doctor, has kept his former examination room with all its furniture and medicine samples, and his wife has preserved Junpei’s room as it was when he died. Junpei is an absence-presence in the film and a spectre haunting the family. The idealized memories of the eldest son make Ryota – constantly compared to him or even mistaken for him – feel uneasy. Hiroshi Abe’s facial expressions are those of a man who can hardly suppress his anger about being continually considered second best.

Memory is a central motif in the film. The women look at old photographs and discover a letter written by Ryota when he was still a child in which he expresses his wish to become a doctor. Ryota tries to seize the letter from them, tearing it in two. Later, at night, he matches the two pieces together, thereby revealing his attachment to his family despite the distance he tries to keep between himself and his parents.

Instead of becoming a doctor, Ryota worked as an art restorer, a choice of profession disapproved of by his father, whose wish that one of his sons should follow in his footsteps has remained unfulfilled. Kyohei is a querulous patriarch who keeps himself aloof and stays away from the women working in the kitchen. However, some of the comments made by his wife reveal a different person behind his imperious demeanour. She mocks his presumptuous attitude on several occasions, pointing out that he was only a doctor in his own small private clinic and reminding him that he was too busy to devote any time to his family the day his son died.

He wonders why the home built with the money he earned as a doctor is referred to by his children and grandchildren as “grandma’s house”, but it is clearly his wife who keeps the family together. While her husband does not seem to know what to do with his time and wanders around the house restlessly, she is always busy cooking or doing other domestic tasks or her needlework. Toshiko is a complex character with considerable determination, despite her frail appearance. No full explanation is given of the circumstances surrounding Junpei’s death, but allusions allow the viewer to understand that he died while saving a boy from drowning. With a mixture of masochism and hatred, Toshiko blames the boy, who is now an adult, for her son’s death, and every year she invites the young man to pay his respects on the anniversary of Junpei’s death in order to make him feel, as she says to Ryota, just as bad as she feels. 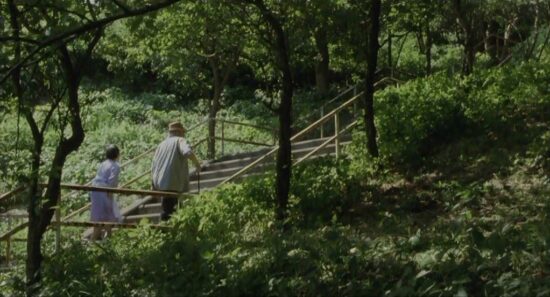 The film’s main setting is the Yokoyama home – a building with a number of small rooms that allow the characters to spy or eavesdrop on each other. Other settings include the streets in the residential neighbourhood, the steps leading to the family home and also the steps leading to the cemetery at the top of the hill, which the characters are seen climbing up or down. The frequent use of ellipses has its counterpart in the often allusive dialogues that challenge the viewer’s imagination. Great attention is given to detail, with the camera focusing on everyday objects, such as a single petal, or the soundtrack focusing on the noise made by Toshiko’s geta (wooden clogs) on the asphalt, details that claim the viewer’s full concentration. A film of long sequences, Still Walking is also a film of silent sequences with just a few piano or guitar chords (in a short sequence showing the three children playing in the street).

Kore-Edas’s narrative and aesthetic choices quite clearly evoke the films of Yasujiro Ozu. Like Ozu’s cinema, Still Walking revolves around the family with the focus on interior settings creating a feeling of intimacy. Just like Ozu, Kore-Eda makes use of straight cuts to transition between scenes. The seemingly disconnected shots of objects or landscape between sequences underline, as in Ozu’s and many other Japanese films, the film’s contemplative dimension. However, Kore-Eda’s frequent use of extreme close-ups of objects and body parts, departing here from Ozu’s style, reinforces the idea of a family life riddled with unresolved problems and secrets.

The last sequence in the film takes place a few years after the reunion and shows Ryota and his family at the cemetery, where they are paying their respects to Junpei and to his parents, who have meanwhile died. Ryota now has a daughter. When they walk down the hill from the cemetery, a yellow butterfly attracts their attention. Toshiko had seen a similar yellow butterfly when she and Ryota came back from Junpei’s grave, and that evening, when she discovered a yellow butterfly in the house, she was convinced it was the same one and a reincarnation of Junpei. In the final sequence, Ryota tells his little daughter what his mother had told him on their way back from the cemetery, namely that yellow butterflies are white butterflies which have survived the winter. Despite the annoyance and anger he expressed during the family reunion, it is now Ryota who upholds family traditions and old beliefs. 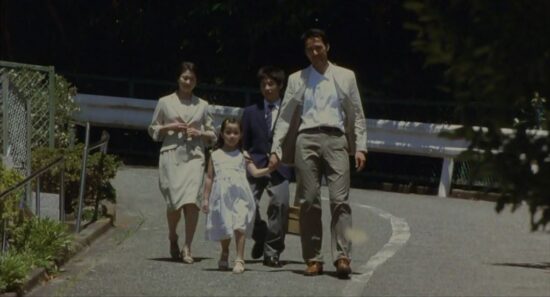