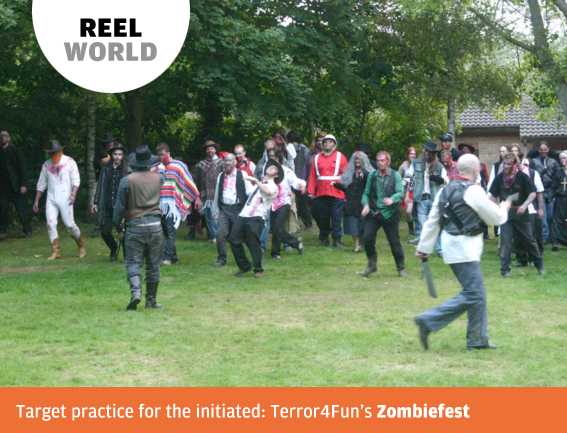 Is it right that you have a different theme each year?
We do have a completely different plot every year, but up until this year we had always set the event in a variety of 1970’s locations such as a Silver Jubilee Party or a village fete, but this year it was 1870 and the Wild West. Next year we are thinking of doing one set in 1871, at a Mexican ‘Festival of the Dead’ that, once again, goes horribly wrong.

Does Zombiefest take a lot of planning and organisation to pull off?
It takes months of planning to get Zombiefest just right, the short films for the Friday night I start researching and trying to get hold of from January.  The plot is based around a concept I have thought about throughout the year and then normally written and finalised about 2 months before the event so that our crew (of friends) can be briefed and props can be sourced and bought. This year the plot consisted of a 40 page document filled with details of props, characters, events and a timeline for the western zombie apocalypse. So I suppose, yes, it is lots of work and it really begins straight after the previous one has finished.

What kind of demographic do you attract to Zombiefest?
We mainly attract both men and women, between 18 and 35 to the event, although to be honest there’s usually more men than women.  It attracts all sorts, from professional make up artists that spend the Live action creating tons of zombies, to gamers who love Resident Evil, to film fans and also, of course, the partners of long suffering zombie fans.

I guess that many of the punters fully embrace getting to be a Zombie for the weekend? Any particular favourites that spring to mind?
Everyone without exception gets stuck in, in a manner of speaking. Perhaps the line was crossed a couple of years ago, when a couple of friends were getting their make up done and one challenged the make up artists that they could not cover him in too much blood. So they stood him over a grid, slowly poured 4 litres of thick syrupy blood over him and his pale grey suit. When his friend came out of the make up hut, his mood changed, as the pale grey suit was his, brand new and dry clean only and had been loaned out on the understanding it was returned in perfect condition. I never did find out if the suit became clean after being covered with food colouring and corn syrup, I like to think it might.

How did this years Zombiefest go?
According to the feedback we have got, this was the best one ever, we set up a saloon, a burial ground, a sacred Indian glade and a few other locations and had over 20 people in full costume as part of the crew playing the locals, the card dealers and the US Cavalry. Then the 70 people who attended interacted with the locals and were there when the first zombie struck. It started with 1 shambling corpse and ended up with over 80 zombies in total.

Finally, what is it about the zombie that seems to draw such affection and strike a chord with film fans and gamers?
I think the zombie is looked at as relevant horror, helped by them being a massive and consistent part of popular culture with films like Resident Evil, Zombieland etc. Zombie related games, books and graphic novels take pride of place in many shops. I think they are at the forefront of peoples fears, as the media over the past few years has drilled into us a massive phobia of disease and infection with the spread of HIV, CJD, Swine Flu and Bird Flu etc. When the news plays these images of gas mask wearing government employees, they simply look like any one of the scenes played out in a hundred zombie films.

Zombiefest is living proof (no pun intended) that a little inspiration, lots of ingenuity and a die hard love for the movies can bring about some very offbeat results. With the horror genre always seemingly able to re-invent itself on the big screen for each new movie-going generation, with Zombies especially popular at the present time, and an increase in the blending of film, game and popular culture in general the future for Zombiefest and other interactive film related events is very bright indeed. It may be a niche event for fans of a particular genre but the dedication, organisational skills and enthusiasm shown by everyone involved should stand as both invitation and inspiration to film fans everywhere to get more unique movie related events up and running.