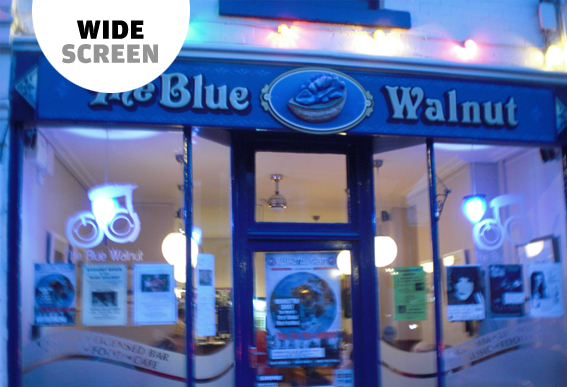 Always on the lookout for cinemas that are keeping the spirit of independence alive, Sean Wilson recently caught up with Debbie and Gary – proud owners of The Blue Walnut Café – to discuss intimate settings, grassroots community and some fairly dodgy film tastes.

Tucked away in the sleepy area of Chelston is one of Torquay’s unsung delights. On first viewing, Walnut Road may appear to be your standard quiet street – post office, Co-Op and so on- but there’s an unheralded gem staring you right in the face. However, The Blue Walnut Café isn’t just that; it’s one of the most culturally significant arts venues in the area, proudly boasting a charming Nickelodeon cinema and extensive cultural programme comprising films, music, and, now, poetry. It also has the great privilege of being one of only four venues in the UK to screen the annual Manhattan Short Film Festival. In such a sleepy seaside town as Torquay, where arts and culture are often subservient to the ebb and flow of seasonal tourism, places like The Blue Walnut are to be celebrated and treasured. Therefore, it was my great pleasure to catch up with its new owners, Debbie and Gary, to ask for their thoughts on the café’s significance in the Bay.

SW: How did you become the owners of The Blue Walnut?

GARY: We were just looking for businesses and this came up. So we came down for a music evening, had a look around, fell in love with it, and said ‘this is for us’. It was a complete challenge, something different; there are lots of different aspects to the café, what with the films and the music and everything else, so we thought we’d take it on and try and make it something special.

DEBBIE: I think the first night that we came… it was just such a unique place and we left with such a smile on our faces. We didn’t quite believe that we could make a go of it but we certainly had to try.

SW: The Blue Walnut encompasses a variety of the arts: poetry, cinema, music – is this mix of creativity something you both have always been interested in?

GARY: More into music than anything else. Probably in the back of my mind, poetry, because I like music, but I never thought I’d quite like poetry in the format that it’s done here as much as I do. It’s been a really good platform for us to get known. The people who come here are fantastic; we get some really good acts. We’ve started on the comedy side of it as well now with Cabaret Oasis, which is a spin off of The Poetry Island. First one we did last week – fantastic! We sold out. 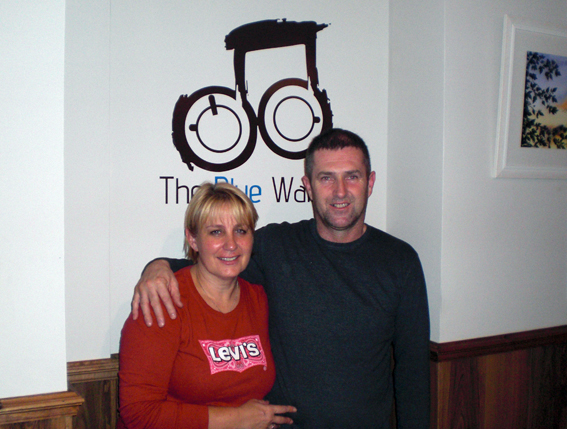 SEAN: So are you finding out more about what you both like and enjoy?

DEBBIE: Well, yes, I mean we knew music was a big event here and poetry was something we thought we’d try out. Actually, we thoroughly enjoyed it and recommend it to all our friends, anyone who’ll listen. It’s such good fun and it’s turned out to be a really big part of the café for us.

SEAN: We’re sat here in the café area and there are pictures of Laurel and Hardy and so on which, to a film fan like me, is wonderful. So it seems important, I imagine, fostering a community atmosphere. Would you agree with that?

DEBBIE: Very much so. It’s a really nice road to be in. They’ve made us exceptionally welcome and there’s a really strong community spirit.

GARY: It is just a great community, everybody’s supportive. It’s very unusual to find a place like The Blue Walnut in this sort of area. We’ve lived in Torquay for 12 years and didn’t even know the café existed until last year. But now, everybody looks out for everybody else and it’s just a fantastic place.

SEAN: And it’s funny you’ve just mentioned that, seeing as Torbay is a seasonal community. Do you think that places like this are significant in uniting the local community when the tourists have vacated?

GARY: Yes, I do. It really needs to be here, this is the sort of thing that keeps everybody together. It’s the sort of place where people meet and it is the talk of the street at the minute. Yeah, it’s good fun. 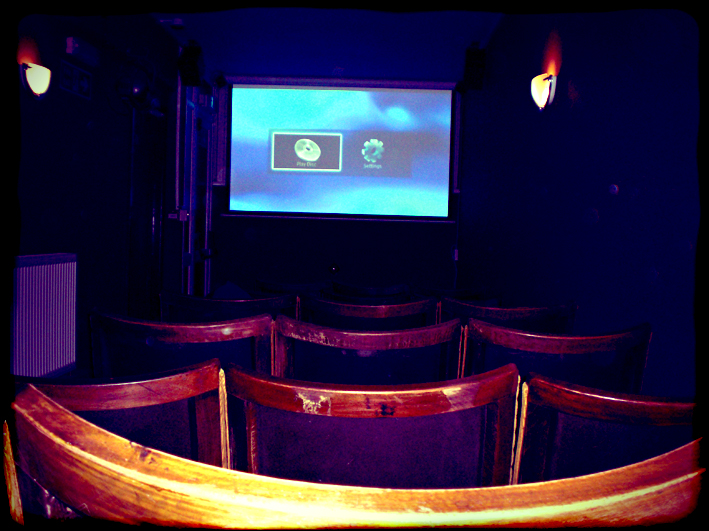 SEAN: And, as of the date of this interview [18/09/10], you’re just about to host The Manhattan Short Film Festival, (from Sunday September 26th to Sunday October 3rd) which I’m very excited about, having attended once before. And this will be the fifth time you’ve screened it?

DEBBIE: It’s the fifth time that the café’s hosted it but the first time we’ve been here to host it. We’ve never even seen it before so we’re really excited about it too!

SEAN: Is it quite intimidating inheriting that level of prestige, taking that mantle on?

DEBBIE: I think so because we weren’t especially huge film buffs before we came here. We’ve still got lots to learn about what people enjoy, so it’s quite a significant thing for us, quite a learning curve!

SEAN: The film programme is from a worldwide selection: Australia, Mexico and so on. Do you get a similar sense of satisfaction in running the cinema and uniting Torbay’s arts culture under one roof? How does that make you feel?

DEBBIE: To have a global event here is really exciting, isn’t it? It’s nice to know we can be a small part of that.

SEAN: Now you’ve mentioned you’re not necessarily huge film fans… but as a big film fan and knowing that you screen films, I’ve got to ask have you got a persnal favourite?

GARY: Well, as far as films go, does Baby’s Day Out count? [Laughs]. But if you wanted something gripping: The Shawshank Redemption.

DEBBIE: Well, I’ll stick with Baby’s Day Out! Because it makes me laugh every time.

For more information on The Blue Walnut, visit www.bluewalnuttorquay.co.uk; to find out more about the Manhattan Short Film Festival, visit http://www.msfilmfest.com/info.html