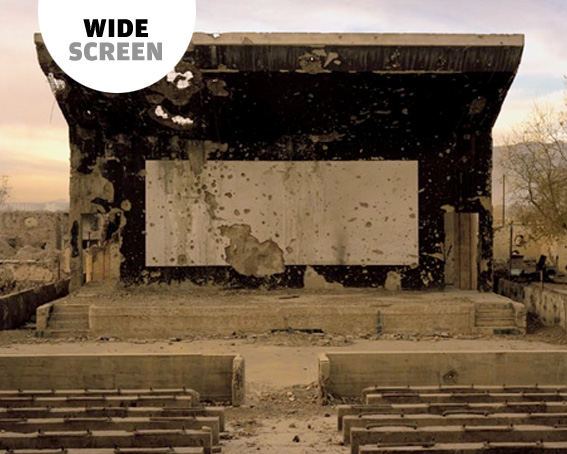 It’s worth remembering that while we in the profligate ‘west’ ponder cinema’s fate – with seemingly endless developments offering us even more choice as to how and where we interact with film – there are some places that don’t afford their inhabitants the same kind of freedoms. The image above then, by celebrated photographer Simon Norfolk, should act as a stark reminder of just how fortunate we are.

Taken as part of a series for a book entitled Afghanistan: Chronotopia, the photo is of a bullet scarred outdoor cinema at the palace of culture in the Karte Char district of Kabul.

The war in Afghanistan has been raging for nearly 40 years – a fact that contributes greatly to the indeterminate sense of time present in this and other photographs taken as part of the series. As Norfork explains in the book’s introduction:

‘Afghanistan is unique, unlike any other war-ravaged landscape. In Bosnia, Dresden or the Somme for example, the devastation appears to have taken place within one period, inflicted by a small gamut of weaponry. However, the sheer length of the war in Afghanistan means that the ruins have a bizarre layering; different moments of destruction lying like sedimentary strata on top of each other.’

Of all the images in the book (a taster of which you can see by visiting Simon Norfolk’s website), it’s this one that I – and perhaps others – can connect with most; simply because we can imagine ourselves sat in that theatre, or one very much like it, watching a dream narrative unfold in the open air.

This familiarity and feeling of connectedness makes the image so haunting because the story it’s telling is just so incongruous; a place of creativity and imagination ravaged by destruction and neglect.

Although a cinema is a place that only really comes to life when people and the film they’re watching ‘fill’ it, there is still a sense of anticipation and promise evoked by an operating but empty cinema similar to that of a notebook page or blank canvas.

The cinema above however fails to evoke that promise because it has been silenced – and unlike a block of flats, house or bridge, the silence is perhaps more pronounced because of what a cinema represents.

Projecting a moving image onto a screen can be likened to the way our mind works; our brain filtering information which is then ‘projected’ through our eyes and formed into an understood narrative. This is why a cinema sometimes feels like a ‘living’ environment – not just because of the collective viewing experience taking place show after show – but the way layers of stories (films) projected onto a screen over time create an odd sense of memory for the building itself.

A Far fetched theory perhaps, but this may be a way of explaining – to myself at least – why Simon Norfolk’s photograph of a bullet scarred cinema in Afghanistan looks more like the corpse of a body than that of a building.