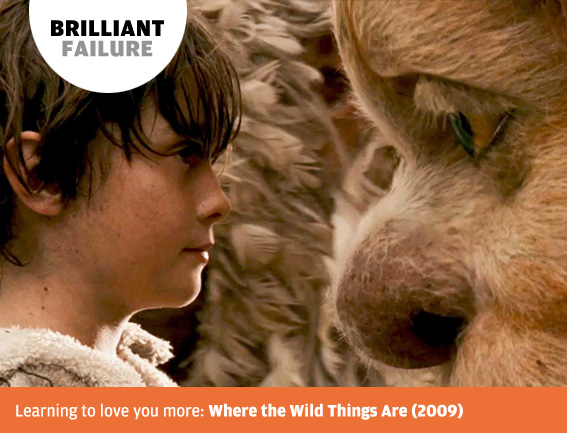 Following the recent death of Maurice Sendak, Spike Jonze’ 2009 film of his seminal children’s book Where The Wild Things Are has been back in public discussion and consciousness and it’s proved a fascinating illustration of how death can shift commentary on works of art.

The film is still fresh in the memory and so are the reviews that greeted its release so it has been surprising to hear the film labeled ‘critically acclaimed’ in the press covering the death of the source text’s creator.

Is this remembrance akin to our memories of childhood? The common response of adults picking up Sendak’s book after a hiatus of years are remarks such as ‘oh, I thought it was longer’ or ‘I thought there were more words’. Jonze’ film was not regarded with critical acclaim on release. It was regarded with confusion and frustration. Critics across the spectrum wanted to love it and admired parts of it. Certain sequences, moments, the puppetry or Karen O’s incredible score. They also found parts awkward, irritating, slow, and too long or too meandering. Few reviews or aggregators stretched beyond a 7 out of 10, or 3 and a half stars to guide audiences (although Manohla Dargis in the NY Times truly loved and got the film) and the general consensus seemed to be that the film was ‘perfect, yet imperfect’. That sounds not only like a review of the film, but of childhood itself.

The film feels like childhood. It is loud and awkward and filled with moments that operate on a different timescale to adulthood. As our expectancy of how a film works becomes rationalized, as we get older, so does everything else. But childhood is irrational.

The film hangs on the belief that children can make sense of the world, can learn value, if they are given time to absorb life and imagine their way through its lessons. Max uses memory powerfully, remembering the words of his elders, reimagining them in the characters of the Wild Things, working out what has happened, and grappling with how he feels. The fact that the structure is abnormal is a criticism adults level at it. That structure and rhythm once felt natural to all of us.

Beyond emotional depth the film is a stunningly crafted cinematic spectacle. Beautifully shot, with amazing puppetry and voice performances. It is so full of love, and wonder, and is driven by a vision that believes in the power of the text at hand, fuelled by the belief of an elder. Jonze is clearly energized to experiment emotionally due to receiving Sendak’s blessing and indeed encouragement to make it. It is the blessing of a Father, to a son, saying go forth, create, have fun, do your thing. If on release it was misunderstood, death, the great leveler, has caused fonder memories of the experience to emerge. Like childhood. We remember the good bits, trying to block out the bits we didn’t like, or understand.