Inspired by William Shakespeare’s Macbeth, Akira Kurosawa created, with Throne of Blood (Kumonosu-jo, Japan, 1957), visual poetry: in black and white, light and shade, movement and immobility. Kurosawa does not try to put Shakespearean English into Japanese. Instead, image and rhythm replace words, pointing to the visual nature of Shakespeare’s language. In this way, Kurosawa, a great connoisseur of literature, affirms his faith in the power of the image, a power which permeates his profound and original oeuvre. 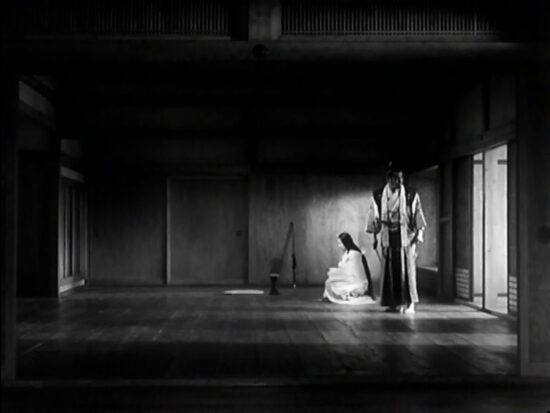 The dense forest in which Washizu (Toshiro Mifune), the film’s Macbeth, and Miki (Minoru Chiaki), its Banquo, are lost is as strongly charged with meaning as words can be. The forest and the aimless wanderings of the two samurai lost in the all-pervading fog are visual expressions of their doubts and hidden desires. The fog envelops and conceals the human figures and the landscape, emphasizing the spiritual loss of the two protagonists. In the shots of the sun, seen through a veil of pouring rain, words are transformed into visual imagery, recalling the passage at the beginning of the play (but absent in the film) in which one of the three witches chants: “When shall we three meet again/In thunder, lightning, or in rain?” Not unlike Shakespeare, Kurosawa makes use of climatic conditions to comment on his characters’ feelings, a device the viewer can repeatedly find in the work of the Japanese filmmaker as early as his very first film, Sanshiro Sugata (Sugata Sanshiro, 1943).

The film follows the storyline of the play, preserving its main characters. The three witches are replaced by one witch, whose translucent white figure in the dark forest generates an aura of mystery and fear. In contrast to Shakespeare’s Macbeth, the forest plays a central role throughout the film, and nature becomes a symbolic space. The dark trees and branches from which hang glittering drops of water create a labyrinthine structure against the sunlight, a visual reminder of the spider’s web to which the Japanese title – Spider Web Castle – refers. As in Kurosawa’s Rashomon (1950), the forest is a symbol of the inner life in which human tragedy is played out. 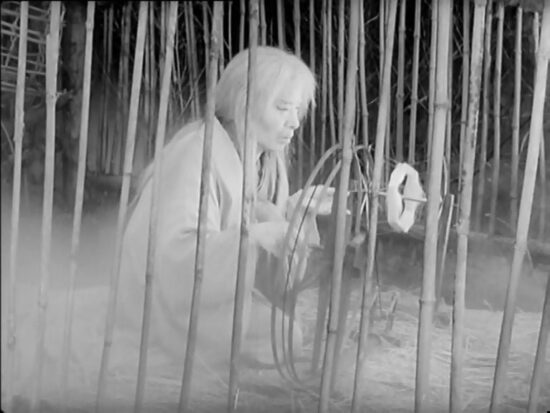 The play’s suggested connections to the circle of life and the vicious circle of violence are explored in the film in the framework of Buddhist thinking. The labyrinth of the spider’s web evokes Buddhist cosmology, the dharma chakra, with the wheel as a symbol of cosmic law and order and of Buddha’s teaching (dharma). The Buddhist imagery of the circle – the perpetual cycle of birth and rebirth and suffering – is given strong symbolic expression in the witch’s spinning wheel, but it is also represented by the wanderings of the two confused samurai in their attempts to escape from the threatening forest. Buddhist themes of futility and impermanence are expressed by the recurrent motif of the wheel and by the representation of natural phenomena – the fog, the rain.

The evanescence and fragility of life is a concept that permeates Noh theatre, a major source in the film. Not unlike the authors of Noh plays, Kurosawa employs mise-en-scene devices borrowed from Noh theatre to question human vanity. The ghost-like witch in the forest also creates a link between Throne of Blood and this Japanese theatre in which spirits and other supernatural phenomena play a crucial role. The empty interiors evoke the austere scenery of Noh productions. In the film, the make-up and facial expressions replace the mask, an important device of the theatrical tradition. Washizu’s make-up is based on a Noh mask called heida, that of the strong warrior; Lady Asaji’s (Isuzu Yamada) make-up is similar to the shakumi, the mask of the middle-aged woman devastated by her separation from a loved one (her child is stillborn). 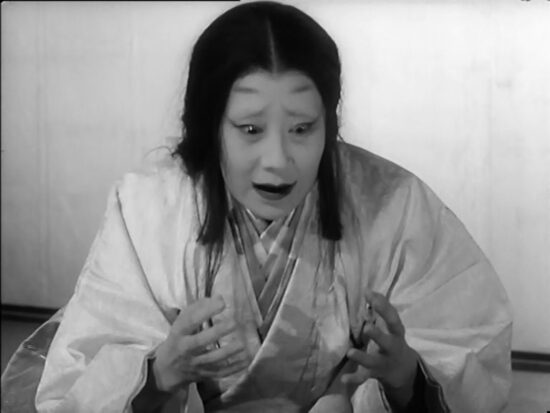 However, it is not simply the make-up but also the acting that creates the lifelike impression of the masks that Kurosawa asked the actors to internalize. In fact, the whole acting style is reminiscent of Noh drama. Lady Asaji walks in a formal Noh heel-to-toe manner. Her movements – switching from a slow and deliberate gait to a quicker pace and then back to the slow gait – reproduce the ideal cadence as described by the Noh writer and theorist Motokiyo Zeami (1363-1443). Her manneristic posture and gestures while seated are also borrowed from the Noh repertoire. Lady Asaji’s hieratic attitude and carefully measured movements contrast starkly with Washizu’s abrupt gestures and quick movements, his rolling eyes and grinding teeth, just as her cold determination contrasts with the samurai’s nervous agitation. 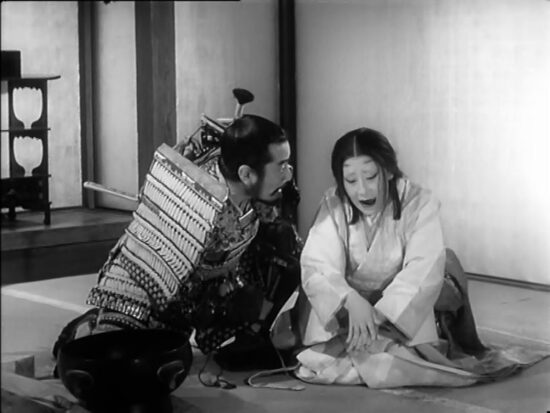 She is the driving force behind the intrigue, and their roles are only reversed at the moment before the murder, when, at her instigation, he grabs his spear. Washizu, returning from his bloody deed, sits motionless, paralyzed by fear and still under the spell of his violent act. His wife takes the bloodstained spear from him and ensures him that the blame will be put on the innocent guards. Instead of a psychological portrayal, Kurosawa makes use of the dichotomy active/passive in which Asaji is the projection of Washizu’s innermost thoughts and emotions. Not unlike Lady Macbeth, Asaji, as Washizu’s dark side, poisons her husband’s mind. While Washizu, still undecided, contemplates the futon at his feet, his wife’s offscreen voice, goading him to perform the murderous deed, could be the samurai’s inner voice. 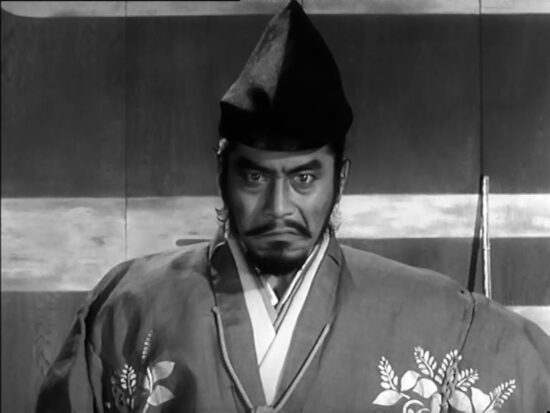 The actors’ subtle switching between movement and immobility also supports the idea of life’s transience. A similar interaction between the static and the dynamic, the controlled and the uncontrolled, is created by the storyline in a number of scenes which contrast moments of contemplation with violent action. In the banquet scene, this principle is employed to explore Washizu’s troubled mind. Haunted by Miki’s ghost, his abrupt movements negate the static order of the hall’s rigid symmetry.

Frequent alternation between silence and music is the acoustic equivalent of this technique. Traditional Noh instruments – the nohkan flute, the drum – are used to underscore dramatic moments, for example the jarring sound of the flute breaking the silence when Asaji announces her pregnancy. While Washizu is away committing his violent act, his wife makes dance-like movements that match the intense rhythmic beat of the Noh instruments. Sometimes the silence is broken only by the rustling of Lady Asaji’s silk kimono gliding across the wooden floor. The witch at her spinning wheel and the magnificent robe made of silk create clear analogies between the precious material and the web of ambition and lies in which the human beings are trapped.

All of the symbolism can be seen as a reference to present-day concerns. Throne of Blood is set in the so-called “Age of Warring States” (Sengoku jidai, ca. 1467 – 1600), corresponding to the civil war in Shakespeare’s Macbeth. However, the tomb filled with skulls, skeletons, helmets, and armour evokes modern war and is a reminder of recent violence, in particular the Sino-Japanese War and the War of the Pacific. The recent past remains an unavoidable presence in this dark, symbolic tale. The first and last shots of the arid volcanic landscape even suggest a modern apocalypse, a landscape after a nuclear holocaust. Asking why men cannot enjoy happiness, Kurosawa develops a bleak vision of humanity caught up in the perpetual circle of greed and the lust for power, and thus beyond redemption.