A blockbuster in the 1970s meant an entirely different thing than it means today. Steven Spielberg’s Jaws (1975) is, plain and simple, a great adventure movie and one of the most effective thrillers ever made: the kind that keeps you on the edge of your seat, getting you to identify with the characters and ask yourself what you would do if you were them. It is a story that scares the hell out of you from the very beginning (skillfully using the power of the unseen – it is what you don’t see that scares you the most), which is why, I think, it is perfect to watch during the idle days of summer. 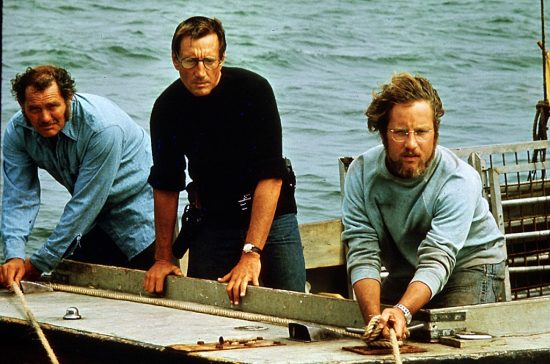 Jaws is also about three guys in chambray shirts, denim jackets, and cotton sportswear who take a boat ride off the coast of Amity, New England, in the summertime. Now, all jokes aside, the clothes the three key characters wear are truly timeless. And what truly makes them timeless is that they are “real man shark-hunting gear.” Real men wearing real clothes, which means that anybody can identify with them. Simple, familiar, functional, straightforward, and uncomplicated. They know for sure what works and they sure know what doesn’t. Indeed, masculine nautical style is the kind of style that does not age: salt-washed denim and military jackets, black sweaters and grey marl sweatshirts, boat shoes and sneakers, and rugged dive watches. They exude modernity and masculinity.

There is Richard Dreyfuss’s Matt Hooper, an oceanographer: a collegiate rich guy. His clothes say Ivy style. The grey marl sweatshirt, for example, is one of the pieces adopted by collegiate preppy style, thus contributing to the transition from its pure functionality (from being strictly a sports garment) to its being worn casually. When he goes to Chief Brody’s house for dinner, he sports a corduroy jacket with chambray shirt and knitted tie, jeans, and boat shoes – the clothes that a well-dressed college man would wear.

Robert Shaw’s rough-edged, old sea dog Quint, on the other hand, is the exact opposite, and everything about his clothing suggests that the last thing on his mind is to impersonate a social creature or to belong. He is as anti-social and anti-conventional as one can be. His clothes serve one purpose and one purpose only: to be worn. His signature long-billed faded cap, blue collar work shirt, and fisherman’s jacket not only signal isolation, but also underline the class difference between him and the other two. “You’re a city boy, you’ve counted money all your life,” he tells Hooper, looking at his hands. “Hey, I don’t need this, I don’t need this working-class hero crap,” replies Hooper, irritated. 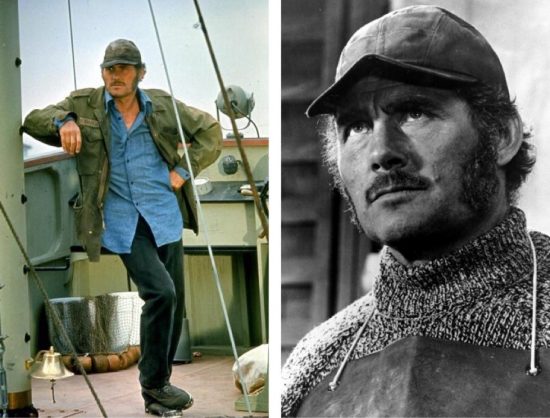 Brody (Roy Scheider) is a middle-class man, and his clothes reflect that. He spends more than half of the movie in a cop uniform and Baracuta jacket, and it’s interesting to see his style evolve, escaping the restrictions of job and social requirements when he switches to t-shirt, black sweater, and jeans when they set sail. He finally seems relieved and at ease when he does that. 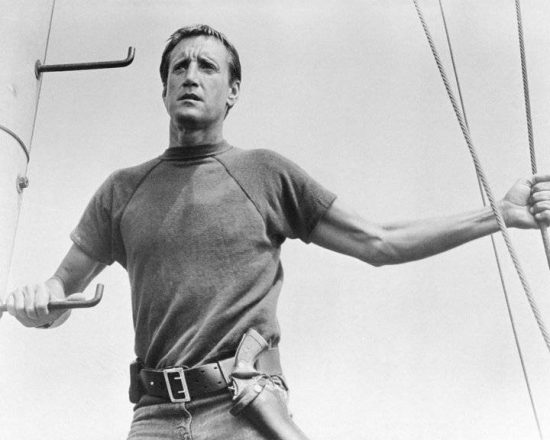