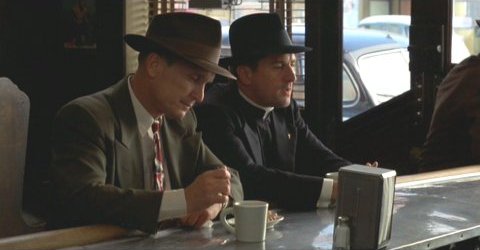 One sunny afternoon in post-war 1940s Los Angeles, Father Des Spellacy (Robert De Niro), a Roman Catholic priest, sits down at his regular hide to join his brother Tom (Robert Duvall), an LAPD detective, for lunch. Their catch-up has barely commenced when up strides shady construction tycoon Jack Amsterdam (Charles Durning), all smiles and joviality as he leans in to the monsignor to whisper a word on some pending property deal. Tom makes his distance from such conversation clear, but drawn in by Amsterdam, he pulls the rug with a curt truth: “I used to work for you… when you were banging whores, I was your bagman.” Visibly fuming, Amsterdam leaves, and the brothers exchange a look in the odious silence that follows. As Tom, Duvall cuts an embittered, unapologetic figure fully aware of his own temper while, as Des, De Niro embodies something between embarrassment, restraint, fury and amusement. Between them, the actors convey a multitude of meanings without saying a word.

Such are the talents on display in True Confessions, one of only seven features directed by Belgian-born Ulu Grosbard, who died last year aged 83.

The film premiered fresh off De Niro’s Oscar win for Raging Bull (1980) – in some scenes, he still sports the remnants of weight he put on for that role – while Duvall was on the upslope to his own Best Actor Oscar for his performance in 1983’s Tender Mercies. Both men channel previously tapped instincts to play subtly and effectively against type. Alongside them is the already-mentioned Charles Durning, one of the finest character actors of his age (who died last Christmas Eve), whose Amsterdam is a city darling as well as a smiling sleazebag who drags the tatters of scandal into every deal he makes. Stellar support is provided by Kenneth McMillan, Grosbard’s wife Rose Gregorio, Ed Flanders, Cyril Cusack and, completing a half-baked subplot, Burgess Meredith.

This superb ensemble brings to life characters first cooked up by John Gregory Dunne in his 1977 novel, and adapted here by him and wife Joan Didion. Part noir, part brotherly drama, their narrative comprises two interwoven halves. Such duality is further symbolised by the suggestive allusions to Cain and Abel as well as by Lois Fazenda, the prostitute whose corpse is discovered halved at the torso, and whose murder pits Duvall’s weary, streetwise cop against the seedy corruption unknowingly fronted by his priest brother.

In True Confessions, Hollywood’s most beloved city is haunted by institutional malaise, and despite the onscreen talents, its deeper suggestions and accusatory airs may account for its lukewarm critical reception. References to the unsolved Black Dahlia case were no-doubt welcome (here, the victim is referred to as “the virgin tramp”), but implicating the Catholic Church in such crimes was perhaps a step too far. Forget or forgive its present-day bookends, though, and as an engrossing crime drama with impeccable period production values, True Confessions gains weight each year as a neglected masterpiece.