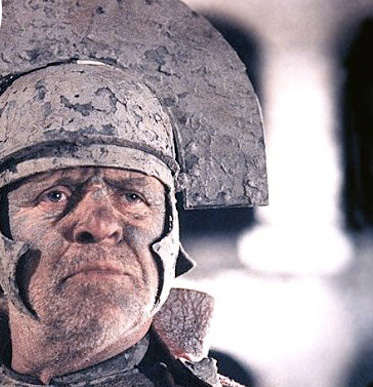 In the first of a regular web series, our resident film music aficionado Sean Wilson takes an indepth look at a carefully chosen motion picture soundtrack. Up first is the score to a truly unique cinematic experiment from 1999. Stage director Julie Taymor’s adaptation of Shakespeare’s grisly revenge tragedy Titus Andronicus is generally faithful to its source…with some striking exceptions.
Titus (played by Anthony Hopkins) is a victorious Roman general, having defeated his enemies, the Goths, in battle. Declaring his support for prospective Emperor Saturninus, battle-weary Titus is drawn into a bloody contest of wills when his daughter Lavinia spurns Saturninus’ advances and his rival sides with Tamora (Jessica Lange), the Goth Queen, whose eldest son was executed under Titus’ command.

As an adaptation, the film would seem nothing out of the ordinary, until one considers the fascinating approach that adds a new slant to the text: bizarre modern anachronistic detail that both competes with, and complements, the classically tragic setting. So, in the opening scene, there is Titus’ expected triumphal march, but with motorcycles; cars zip around the Empire, while characters, dressed in modern clothing, make speeches to the masses using megaphones.

It’s a brilliant collision of styles and eras that preserve the integrity of the text while drawing out its resonant, still contemporary, themes, and this ingenuity extends to Elliot Goldenthal’s original score. One of the most original film composers to emerge in the 90s, Goldenthal’s (Interview with the Vampire, Heat, and Taymor’s partner) blisteringly original work for harsh, clustered horns and strings serves him well in the violent world of Titus. Yet it’s also much less abrasive (though still unusual) than many of his other works, fusing orchestral might with bold jazzy interludes that somehow reek of the decadent world the characters inhabit. 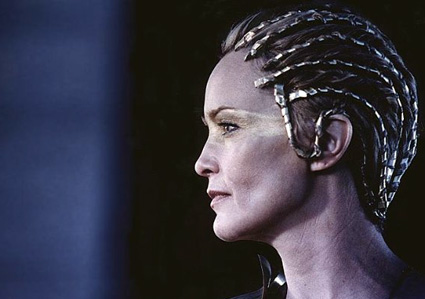 The opening, ‘Victorious Titus’, is enormously impressive, all chanting choir, swirling woodwind and timpani, laying Titus’ achievements on the musical table, with an appropriate undercurrent of foreboding. Goldenthal’s familiar vocal stylistics emerge in ‘Procession and Obsequis’, with low throat singing giving way to an eerie soprano similar in style to Alien 3, anticipating the terrible tragedy to come.

‘Tribute and Suffrage’ marks the first unexpected u-turn of the score with the quiet orchestra giving way to a sleazy saxophone and finally big-band swing; the composer manages the shift remarkably well, ensuring the play’s themes of corruption and perversion are relevant in any musical genre or time zone (Goldenthal was said to have derived inspiration by driving around Rome and hearing the modern criss-crossing of music, from hip-hop to pan flutes).
The rest of the score continues in much the same vein, with the composer’s thrilling action music for whirling string arpeggios also making an appearance in ‘Arrows of the Gods’, ‘Crossroads’ and elsewhere, as events escalate to increasingly nasty proportions. The aptly named ‘Swing Rave’ is an ironically funky celebration of revenge and hatred before the consequences of these actions sink in with the chillingly dissonant ‘Ill Fated Plot’. 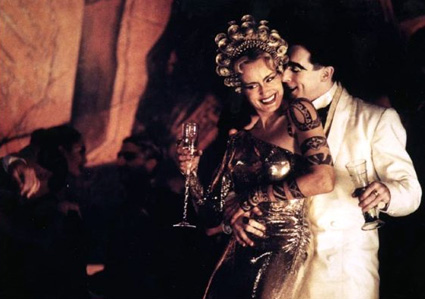 ‘Pickled Heads’ (the heads in question being of Titus’ sons), is the score’s centrepiece and a real jolt at that, a Danny Elfman-esque pulsating hip-hop/rock/oompah beat that serves to make a hideous act even more so by its blackly comic rhythms. Few, if any, composers would dare to merge these styles together in one album, confirming Goldenthal’s importance as one of the most significant film composers around.

Despite his reputation for unparalleled creativity, he is also able to wring maximum emotion in the climax of the album, so that even as the increasingly pervasive, twisted jazz marks Titus’ collapse, a track such as ‘Finale’ is genuinely affecting and moving, a musical elegy to the consequences of revenge and hatred that Shakespeare laments in his text. It’s not a score for everyone’s taste – the shift between wildly different musical styles will be too much for some – but in terms of vision and invention, Titus is one of the most important film scores in recent years.