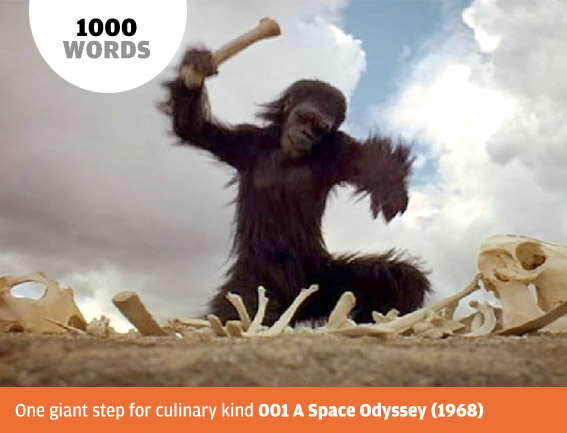 It’s arguably the most important turning point in human history ever filmed: the moment when early man discovers the tools of slaughter and develops a taste for meat. But the bone-wielding ape in Kubrick’s 2001: A Space Odyssey (1968) is merely the departure point for a film that is seemingly preoccupied with all things foody.

Try to imagine that the Monolith, that alien sentinel that has taken the form of a priapic bar of 99% cocoa Swiss chocolate, is a sort of intergalactic Egon Ronay, roaming from planet to planet on its mission to judge and improve the eating habits of the local population. Before its arrival at the Dawn of Man the inhabiting hominids of Planet Earth, who seem to be making do with a wholly vegetarian diet, are themselves a food source for the existing carnivores of their world. Then one of them wakes up and smells the Bisto, discovers that an animal bone makes an excellent club and before you know it the tapirs are going down like nine pins and Bonzo and co. are chowing down on steak tartar. Job done Egon.

Cut to ‘the future’ – in Kubrick’s imagined Space Age food has ‘evolved’ to a stage where it is purely unappetising synthesised fuel. Heywood Floyd (William Sylvester) gets to sample an airline meal (a sectioned tray where the food is hidden under covers bearing pictograms of the contents and accessed through feeding tubes), an experience that has him rushing to the Pan Am spaceship’s zero gravity toilet with a touch of ‘moon belly’. 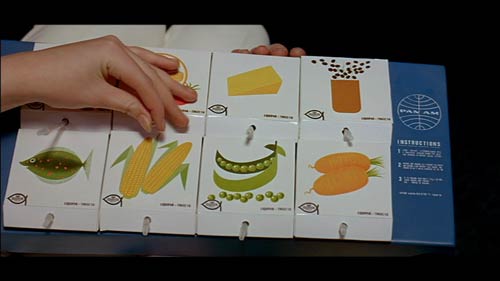 When he embarks on the lunar shuttle for the rendezvous with the Monolith at the Tycho crater the crew breaks out the sandwiches. Cue the time-honoured finger buffet ‘chicken or ham?’ guessing game as to the origins of the sandwich contents. It’s all yet more processed nutrition done up to resemble something edible. Egon the Monolith is very annoyed. He didn’t come all this way and tinker with mankind’s development just so they would end up forcing homogenised protein paste down their throats. So he issues a restaurant review in the form of a deafening high-pitched squeak.

Eighteen months later nothing has been learned. On board the Discovery astronauts Dave Bowman (Keir Dullea) and Frank Poole (Gary Lockwood) sit about scooping assorted troughs of dun-coloured sludge into their mouths as they catch up with the news on BBC12. Lord knows what the celebrity chefs of this future got up to in their kitchens. Bowman and Poole’s TV dinner aggravates Egon the Monolith so much that he sends onboard computer HAL round the twist. They must pay for their uncultured palate with their lives! As we know Bowman survives but when he finally meets Egon floating close to Jupiter like a disgruntled slab of treacle toffee the Monolith propels the hapless human beyond the infinite – one only hopes he managed to keep his food down – to be taught a final lesson about fine dining.

There he is in that eery Louis XVI waiting room at the other end of the Universe, sitting down at long last in the accelerated autumn of his years to a proper square meal, from a real china plate no less, with wine served in a crystal glass. It’s perhaps the first real meal he has ever experienced. It’s certainly his last. ‘You’re not leaving the table until you’ve cleared your plate’, one can almost hear Egon intoning. The flavours are all too much for poor old Dave; when reaching for the condiments he knocks his glass of wine to the floor, smashing it. What a waste of a good drop of Chablis. The meal has obviously been such a shock to the system that he has to have a little postprandial lie down to aid digestion. Egon pops up the end of his bed, like a gigantic after-dinner mint in the hope of comparing notes with the rapidly aging spaceman. Bowman can only manage a weak request for some Rennies before Egon decides he’s had enough and sends Bowman back to Earth as a great big baby, figuring he’ll be right at home now that all human beings have reached the point of exclusively eating baby food.

The preoccupation with food, as with so many aspects of Kubrick’s films, is no accident. In his excellent article ‘My dinner with Stanley: Kubrick, food, and the logic of images’ published aptly in the 2001 volume of the journal Literature/Film Quarterly, Mervyn Nicholson explains the director’s obsession:

Stanley Kubrick was preoccupied with eating and drinking as symbolic acts. The motif is so important in his work that his handling of it gives a kind of access to the logic of his films generally. Kubrick’s use of the food motif is doubly interesting because his movies are so various, so complex, and so carefully constructed… The primal nature of food is what gives it its immense power as a motif. Above all, food is an emblem of dependency. No food = no existence… The fact that food, the source of life, is now a mere technological “fix” marks the symbolic direction of the narrative: the sterility of the culture that 2001 depicts. However different, it replicates the sterile dead-end of our primate ancestors which forms the starting point of the movie.

In 2001 the repeated and prolonged appearances of food are an indicator of this battle to continue to exist. By depicting food as bland and unappetising perhaps Kubrick was remarking upon the modern world’s faltering attempts to stave off extinction through its increasing reliance on dietary homogeneity. 2001 was not only prescient in its prediction of space travel; it’s interesting to discover that the film was released around six months before the first appearance of McDonald’s famous double-arched golden ‘M’ advertising symbol. What I wonder would Egon the Monolith make of a quarter pounder with cheese.