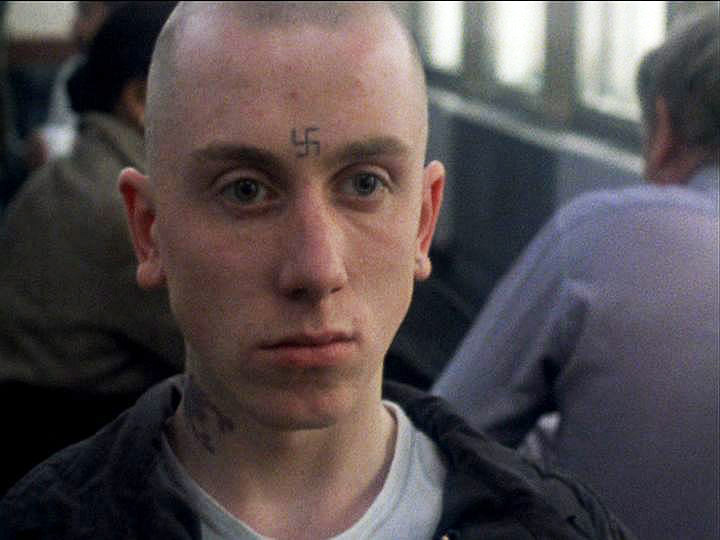 A young man, head shaved, the tattoo of a swastika on his forehead, stands up abruptly and moves towards the camera as if smashing into the viewer’s face. This opening shot announces the high tension which characterises Alan Clarke’s Made in Britain, a production for Central Television. The actor’s aggressive body language is sustained by the movement of the camera and a discordant punk music soundtrack. The protagonist is sixteen-year old skinhead Trevor, played by Tim Roth in his first role. The camera staying on Trevor reveals him as the focus of interest. Made in Britain depicts his self-destructive itinerary as a chain of violence: his arrival and short stay in the assessment centre, his escape and new arrest.

Trevor has been sent to the assessment centre for repeated vandalism and burglary. Later, he smashes the windowpanes of an employment agency and a Pakistani family’s home, the family having already been the target of his violence. Besides physical violence, mainly against objects, he provokes verbally, calling everybody “wankers” and spitting out his hatred of the establishment and of adults in general. Foreigners are the favourite aim of his frustrations. He makes offensive remarks and uses racist language. Abusing of Errol, another inmate of the assessment centre who admires him, the skinhead leaves the disoriented youth in a stolen car in front of a police station. Aggressive behaviour determines his whole being and replaces other forms of emotion; all his social relations turn out to be negative. 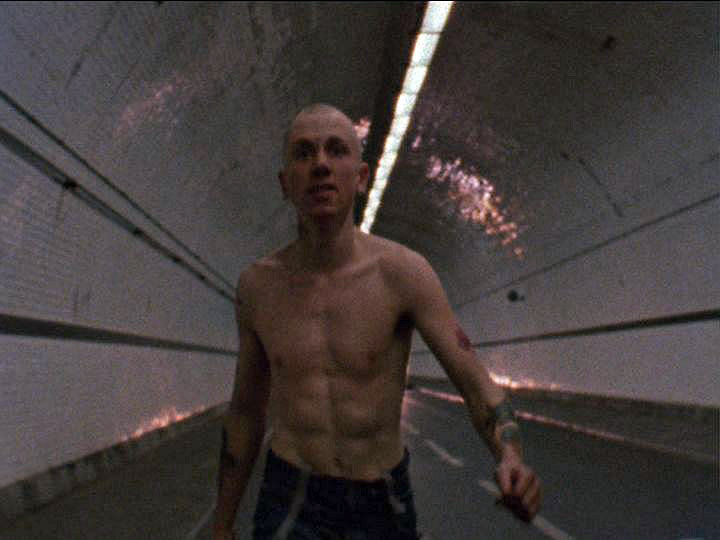 There is no information given about Trevor other than his criminal record. Nothing that would explain his behaviour. But he is not reduced to the mere cliché of a racist skinhead. The character evolves in a narrative that creates multiple emotional spaces allowing the audience to align with the protagonist and placing him in relationship to the situations he is portrayed in. The steadicam, closely attached to Trevor, orientates the gaze and involves the viewer perceptually and emotionally to the extent that one is borne helplessly along as Trevor marches through endless halls and tunnels.

Trevor is both culprit and victim. He is one of the many marginalised in post-industrial Britain. Clarke depicts a society that failed its citizens without giving further explanations or suggesting a remedy. Shots of gloomy urban spaces and Roth’s intense performance reveal the rift that marks the social failing.

The penchant for violence is inscribed on the protagonist’s body: head shaved, arms and chest tattooed. The tense body and the face distorted by rage show hardly suppressed anger. Trevor is a ticking time bomb, ready to explode at any moment. Roth delivers the fine portrait of an adolescent possessed by anger and frustration whose violent conduct finally turns against himself as if his self-destructive behaviour is his only meaning in life. 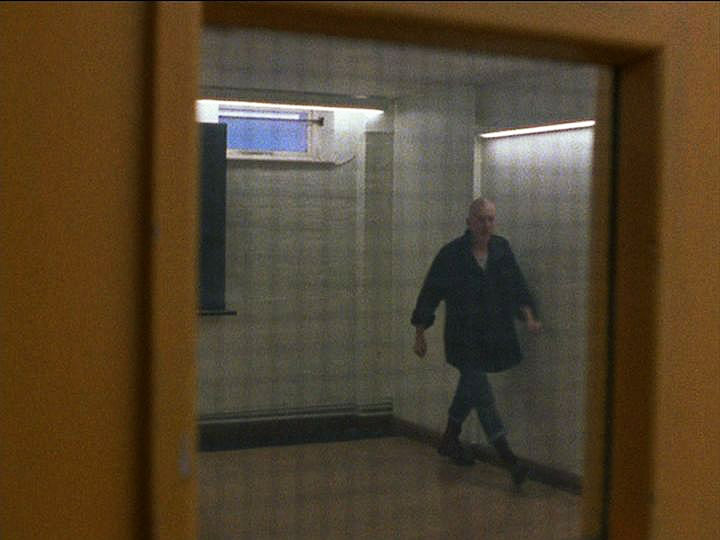 Trevor is caught in an infernal cycle in which violence engenders violence. Several references to the symbol of the circle relate to the pessimistic vision of contemporary Britain. The narrative, informed by this cyclical structure, starts with Trevor appearing at juvenile court and ends in a prison cell after his escape from the assessment centre. To each of the young man’s violent actions, society replies with more severe measures of control and punishment but fails to give him a proper job and the recognition and love for which he searches.

Shots and dialogues reshape the circle symbol and participate in the discourse on a life without a future. The very idea of the circle permeates the long sequence in which Trevor is locked in a room at the assessment centre after having attacked the cook who had refused to serve the latecomer a meal. Moving around in circles, he appears like a trapped animal in a cage.

Framing and camera movements create visual closures revealing physical, social and mental limitations. The camera, attached to the protagonist, restrains his space of action. Bars and other obstacles have double-edged functions, of both imprisonment and exclusion. Scarce lightning, dark colours and frequent interior shots contribute to the feeling of oppression. Strategies of fragmentation (the multiplication of close-ups and medium close-ups, the darkness which hides parts of the image…) generate latent tension and the omnipresent feeling of conflict.

The skinhead is a socially and culturally defined type whose aggressiveness and somewhat arrogant smile ignite the viewer’s fantasies and fears, provoking both admiration and rejection. Far from being a brute, Trevor is an intelligent and eloquent adolescent who challenges his environment ceaselessly. He points to the fact that adults are unable to offer him a better future: “Teachers don’t want kids to be honest, they’d lose control … all school teaches you is to work hard and get a job otherwise you’re no good.” 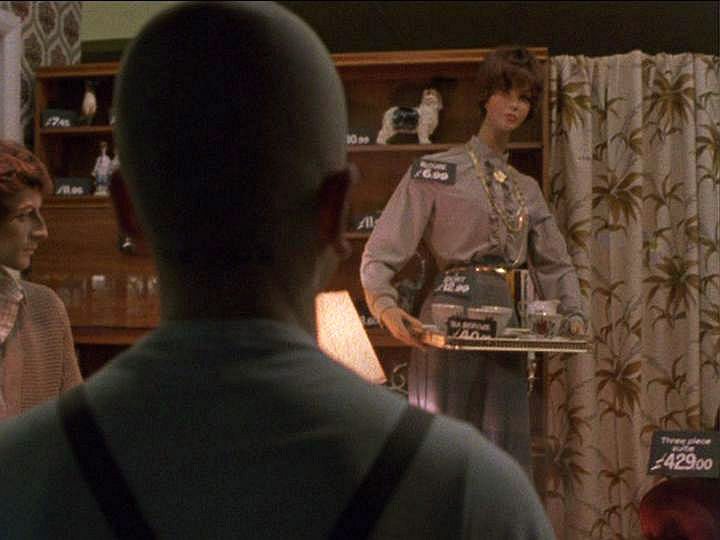 Harry, the social worker, seems to be honest and shows sincere interested in Trevor. However, when the young man intrudes into his private space, he calls the police for protection for his family and his own comfort. The insolent youth is kept apart from the family idyll: quickly Harry shuts the door to the bedroom of his two sleeping little daughters. For Trevor, family remains an inaccessible dream and a fabrication. In a shop window, dummies represent family life for Trevor who contemplates this tableau extensively, looking knowingly. The happy family is a fake, a mere illusion in a society that excludes boys such as Trevor from normalcy.

Without justifying the young man’s violence and his racist attitude, Clarke celebrates his energy, which prevents the protagonist from being a stereotypical victim. However, it reveals the vulnerability underlying his aggressive conduct. The title Made in Britain suggests to what extent Trevor is the product of a society unable to face its own problems and its incompetent and inefficient educational system. Errol and another young man Trevor meets at the employment agency are quasi-analphabets. The adolescents are outcast by a society on the decline. 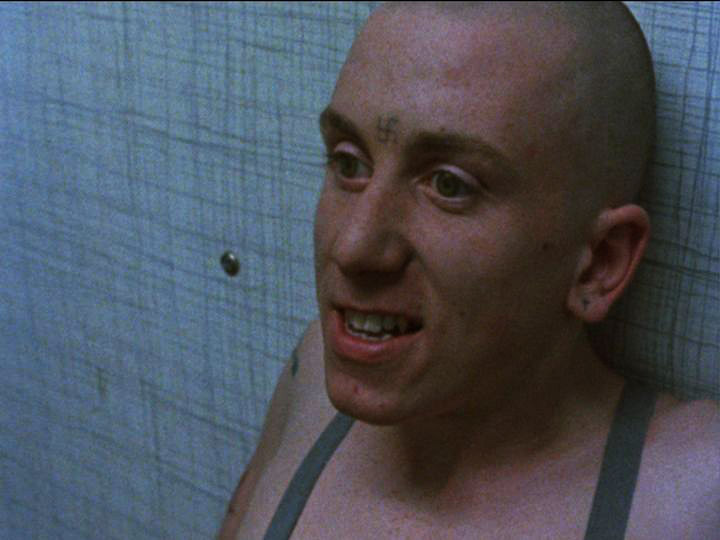 The last shot is a medium close-up of Trevor’s face. Lying on the floor in a prison cell before being sent to a detention centre, he is not yet defeated. However, his smile is ambiguous, pointing both to the young self-confident man in revolt and a deep feeling of insecurity and loss. The freeze frame, revealing Trevor as the victim of an unresolved social dilemma, denies the viewer any feeling of relief.