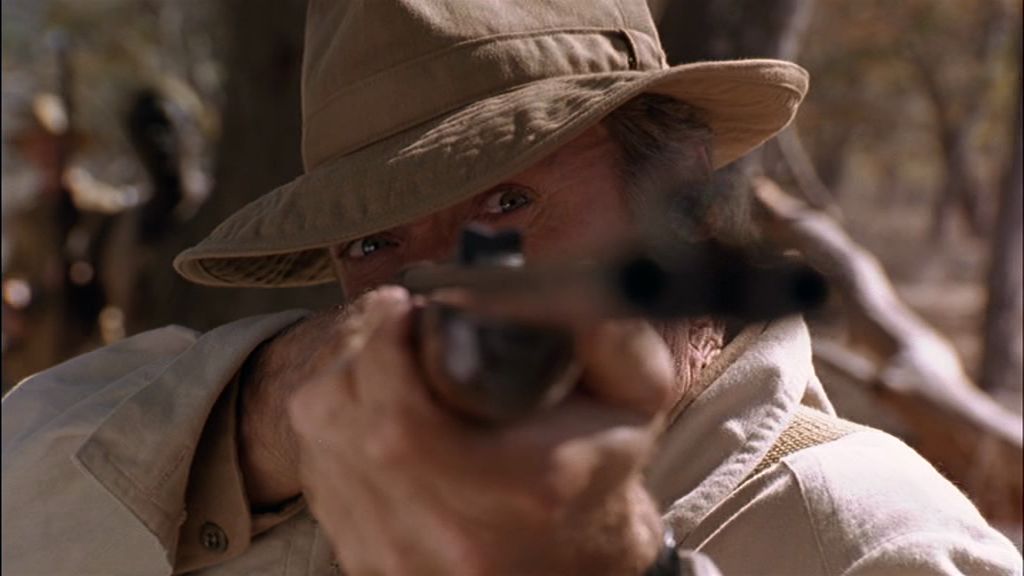 The heroic (white) male is at the core of Clint Eastwood’s cinematic oeuvre. However, the victory over evil is always overshadowed by the hero’s ambiguity. Harry Callahan’s (Dirty Harry, 1971, Don Siegel) chase of the criminal is an inner journey which results in a confrontation with the cop’s own violent impulsions.

The serial killer Scorpio is Callahan’s own distorted self-image manifested in the same way as Evelyn, the woman who stalks Dave Garver in Eastwood’s directorial debut Play Misty for Me (1971), is the materialisation of the protagonist’s suppressed sexual desires. Facing his villainous alter ego, Callahan is at the edge of losing control. Eastwood’s Tightrope (1986, officially directed by Richard Tuggle) deepens the strong relationship between violence and sexuality and reveals the protagonist’s murder investigation as an obsessive quest during which he comes close to paranoia. Professional zeal unmasked as obsession marks films such as Bird (1988), J. Edgar (2011) and American Sniper (2014).

Not unlike their forefather Natty Bumppo, Eastwood’s cops are hunters, identifying with their prey. The dark, tormented side erodes their heroic stature and the very notion of heroism itself. The examination of Eastwood’s screen persona based on the loner hero is advanced a step further in White Hunter, Black Heart (1990), in which the director connects a critical discourse on Hollywood’s film industry with moral reflections. 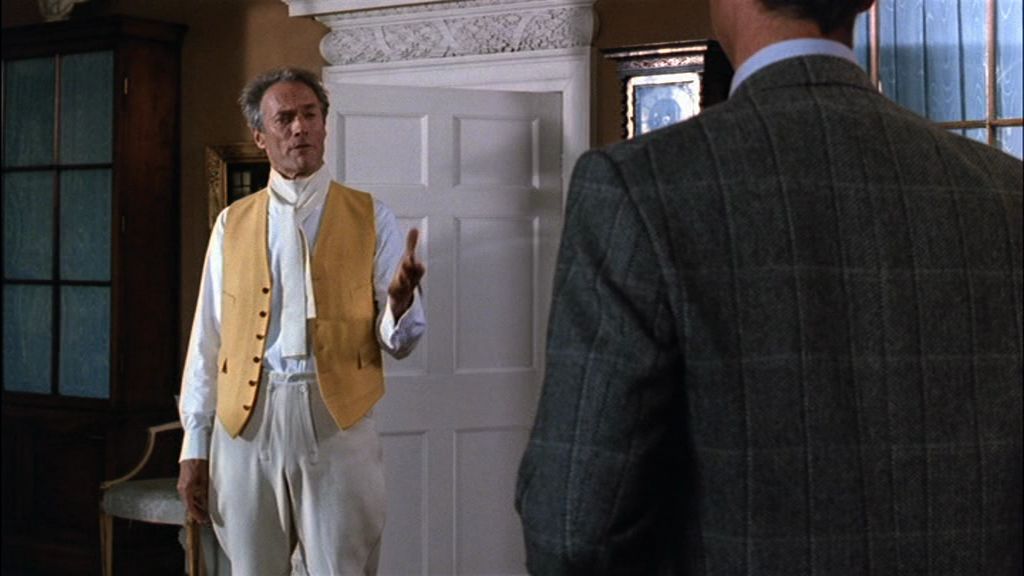 Instead of starting the shooting of his new film, the famous filmmaker John Wilson, possessed with the idea to kill an elephant, goes for a hunt. Ahab and Moby Dick spring immediately to mind. The comparison is not vain but sustained by the fact that the model for Wilson is John Huston, who adapted Herman Melville’s novel to the screen in 1956. White Hunter, Black Heart is based on scriptwriter Peter Viertel’s (Pete Verrill in the film) eponymous novel inspired by the shooting of Huston’s African Queen. It’s not just Viertel who has referred to the obsession with the elephant, as Huston himself mentions it in his autobiography. Years before a Daniel Day-Lewis Huston-inspired performance in There Will be Blood (2008), Eastwood makes an excellent imitation of the late director whom he admires. Eastwood frames the confrontation of Wilson with the elephant in the same way as Huston filmed the one between Ahab and the white whale. In a shot/reverse shot, the hunter and the animal are shown face to face in close-up, the emphasis being put on their eyes.

There are no sequences depicting the shooting of African Queen; the last word of White Hunter, Black Heart is “Action!” Wilson is the film’s key figure, its center of gravity. By focusing on the main character, Eastwood not only introduces a self-reflexive stance related to his personal vision of filmmaking, but also explores topics which permeate his whole oeuvre and which are linked to his fascination with obsessive characters.

The imaginary idea of the American frontier, omnipresent in his cinema, provides some of the main themes: the loss of innocence, the idea of the fall, visions of sin and human evil. In White Hunter, Black Heart, the African savannah becomes the frontier-like space in which Wilson seeks desperately to live a last adventure. Not unlike Hemingway, Eastwood refers to the repertory of virility: the buddy couple, the hunt as a proof of true masculinity. The main conflict is, as seen in the frontier tale, the encounter between civilisation and wilderness.

Wilson is aware of the fact that he brings impurity with him: “Killing an elephant isn’t a crime. It’s more than that. It’s a sin.” And he is determined to commit this sin. His statement reveals him not as a monster but as a man acknowledging his very nature; the search for personal freedom is always accompanied by failure. Wilson cannot avoid this contradiction which many heroes of western films have to face. He lives it like an obsession, pushing it to its most radical consequences, to death and destruction. Wilson is the man who deliberately chooses the image of the sinner as if his humanity is only revealed through his dark side. Eastwood’s penchant for the chiaroscuro is a signifier of its own. He explores the scale of gray to black to portray his troubled hero through the film’s very aesthetics: plunged into darkness, the actor’s (Eastwood’s) body becomes a mere silhouette. Being such a shadowy figure, Wilson’s personality seems weakened, like that of a man whose identity is shattered. 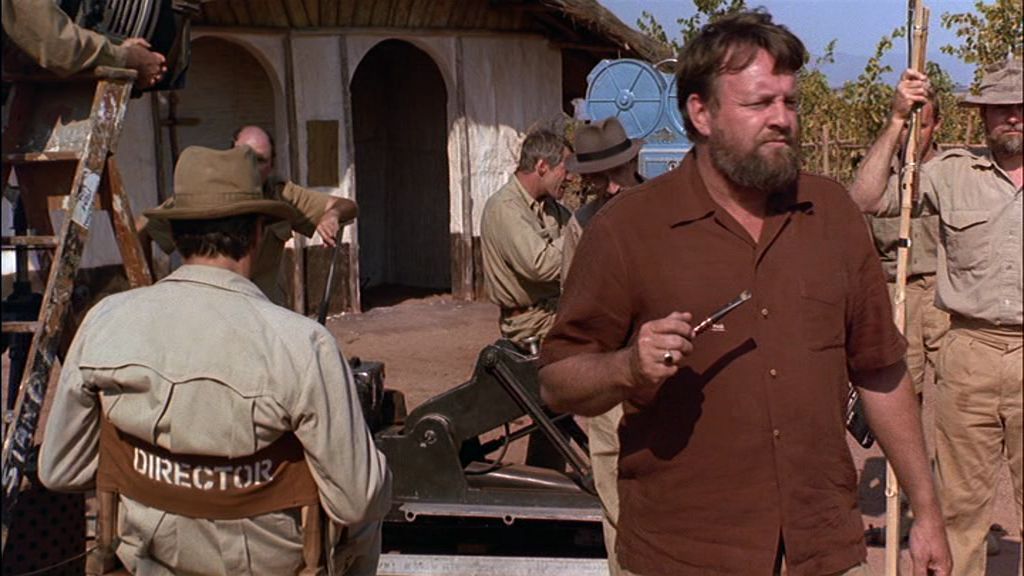 The film’s approach to innocence and guilt is closely linked to the experience of the American nation as well as to a more general historical context given by subjects such as racism and imperialism. Wilson’s journey from England – where the story starts – to Africa imitates the American historical experience: from the East to the wide open spaces of the West. Wilson is introduced in a beautiful castle in the English countryside. Wearing the elegant costume of a rider, he looks like a country squire of another century. His self-confident behaviour, reminiscent of aristocratic manners, completes this very image. However, the frontier is closed, and the man from the West (Hollywood) has to go to Africa to find the appropriate conditions for his quest. His journey is analogous to the traumatic conquest of frontier America (the genocide of the Indians) and more recent human catastrophes (the genocide of the European Jews). Wilson fights – verbally and physically – against racism and antisemitism but, at the end, is a man who cannot escape his own social and cultural conditions. Detached from the African villagers mourning the death of Kivu, the tracker killed by the enraged elephant that Wilson was unable to shoot down, he starts the filming. Wilson fails as the romantic hero and turns into his ordinary self, the rather authoritarian filmmaker.

The African Kivu represents the Other, Wilson’s desired (and supposedly feared) side. Not unlike the figure of the ‘noble savage’, Kivu is opposed to the rationalism of Wilson’s companions, including Pete Verrill, and to the corrupt side of white civilisation. By killing Kivu, even if involuntarily, Wilson destroys his own ideal but inaccessible image, revealing under the mask of tolerance his ignoble and savage self. His failure is pathetic. It is the one of the immature hero, the eternal adolescent venerated by the American culture. The filmmaker defines his own position with regard to his characters: “We are Gods. We decide who will live.” Only here, fiction turns into tragedy, obsession into the death of a man and into disenchantment. The hero’s dark side does not allow any triumph over evil any more and offers no chance for healing.