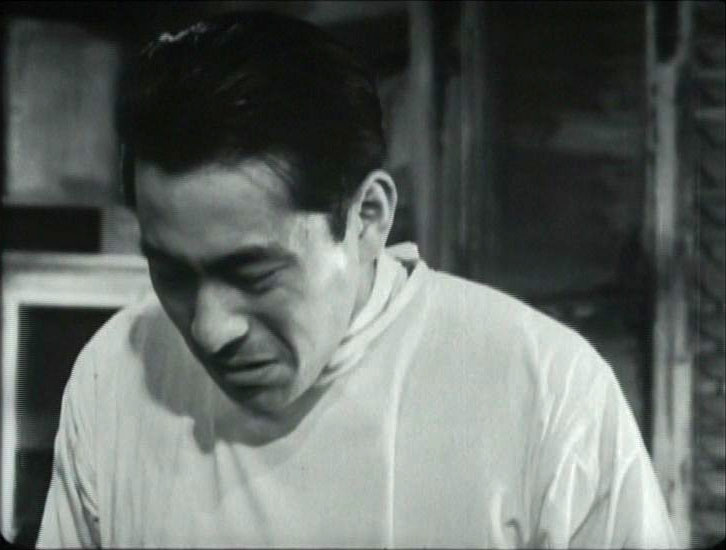 In the long opening sequence of Akira Kurosawa’s The Quiet Duel (Shizukanaru kettō), which takes place in 1944 in one of the Southeast Asian countries occupied by the Japanese, a man in a white coat is talking to another man who, dozing, leans against the wall behind them. The second man, his face hidden behind a surgical mask, comes slowly into focus.

It is in this very understated but highly suggestive manner that the film’s main character Kyoji Fujisaki, played by Toshirō Mifune, is introduced into the story. Having contracted syphilis from treating a diseased patient during an operation, Kyoji hides the truth of his condition from his loved ones when back in Japan at the end of the war.

The screenplay, adapted from a contemporary Japanese play, The Abortion Doctor by Kazuo Kikuta, underwent major changes that the American Occupation Forces had required. In the original script, written by Kurosawa and Senkichi Taniguchi, the doctor goes mad at the end. The CIE (Civil Information and Education Section), concerned with an increasing amount of venereal diseases, feared that such an ending could have a negative effect on the viewers, leading them to avoid treatment.

Moreover, the film does not mention the abortion undertaken by the protagonist before the war as mentioned in the play. Instead it deals with the matter in highly moralistic terms when the young doctor lectures the nurse, a reformed streetwalker, wishing to get rid of her baby.

Despite its softened conclusion, The Quiet Duel conveys numerous significant themes that became recurrent in Kurosawa’s rich cinematic oeuvre: questions of truth, illusion and lie, individual responsibility and the affirmation of the self. 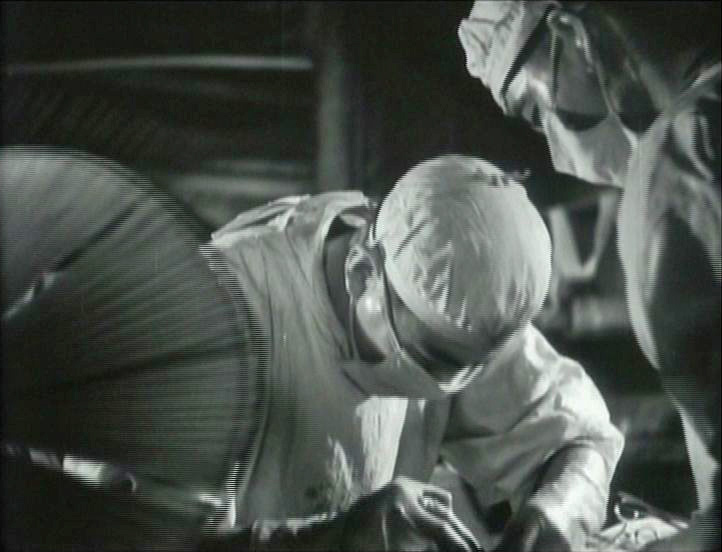 The opening sequence is set in the chaos of war. The succession of close-ups and medium shots, with the camera close to the sweating body of the young army surgeon who is struggling for his patient’s life, creates a sense of instability and despair. The continuously pouring heavy rain and shots of the exuberant jungle vegetation surrounding the primitive building that serves as a military hospital raise the intensity of the situation. The fan waved by one of the soldiers to comfort the doctor in the small room and the water dripping from the roof into a metallic receptacle create irritating noises, contributing to the feeling of great pressure. The stress the protagonist undergoes and the heat itself become almost palpable. The atmosphere, filled with tension and anxiety, explains the protagonist’s impulse to snatch off his surgical gloves. It is then that he cuts his finger, mingling his blood accidentally with that of the patient.

Illness becomes the catalyst for the universal moralist tale of life and death as well as for the film’s critical approach to post-war Japan. Matters of truth and lies are inextricably connected to questions of individual and collective responsibility. Kyoji hides his disease and, trying to cure himself, is wrongly taken for a thief by one of the nurses who sees him secretly injecting some medication. Though he confesses the truth to his father, Kyoji is unable to reveal it to his fiancée Misao, who believes that he does not love her anymore. He suppresses his deepest feelings and breaks off their engagement so as to not hinder Misao’s happiness and future.

The majority of the story takes place in the small hospital, except for a few shots of the surroundings. These recall Tokyo in ruins after the heavy bombings of 1945. The kammerspiel-character, reminding us of the film’s theatrical origins, creates an intimate space strongly imbued with social issues. Kyoji’s illness is treated within a broader context as an illness that undermines society. The young man tries to explain to Misao the very reasons for their estrangement, referring to himself as a person whose body “[…] is pure, but not pure. It is dirty.” He, the virgin, became the innocent victim of evil, which now torments him. 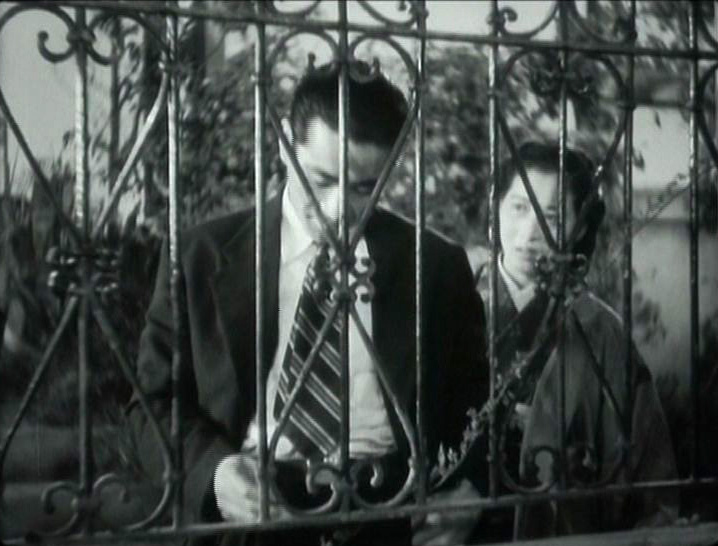 This portrayal of an individual bears various significations. The fact that Kyoji is punished for a crime he did not commit evokes the situation of Japanese soldiers stigmatised after the defeat, sometimes wrongly accused as war criminals and abused by a military regime which did not assume full responsibility for the war. Kurosawa reveals, even if only through allusions, old and new lies haunting Japanese society which, with the help of the Americans, created scapegoats in order to avoid facing its own war responsibility. He eventually suggests that the culprits are not just the men judged by the International Military Tribunal for the Far East but that evil is a far more complex issue; the fault lies in every person.

“I got your spirochete in my body,” Kyoji says to Nakata, the soldier who had infected him during the operation and whom he coincidentally meets after the war. Kurosawa presents the two characters within the frame of the doppelgänger-motif. Innocence and guilt, lies and truth are constantly intertwined. 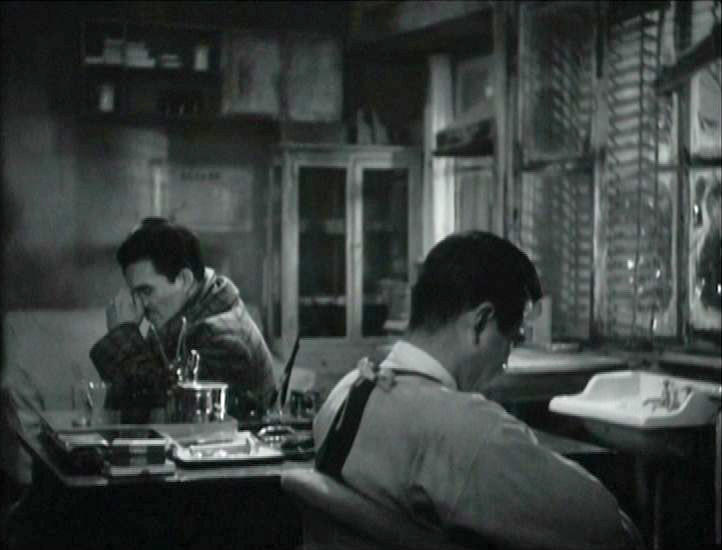 By confronting Nakata, Kyoji confronts himself, revealing another truth about his very being. Culprit and victim are the two faces of the same personality, an idea visually expressed in the profile shot of the two men sitting back to back. While Nakata refuses to behave in a responsible way and not only avoids treatment but has already infected his pregnant wife, Kyoji tries to live justly by assuming his civic responsibility, living a chaste life and devoting himself to the care of his patients in the rundown neighborhood.

Not unlike Doctor Sanada in Drunken Angel (1949) or Doctor Niide in Red Beard (1965), Kyoji fights against disease: stubbornly, in a frantic but strictly personal manner. By accepting his fate, he confirms the Confucian ethos of self-control while affirming himself as an individual in a society in which conformism prevails.

Mifune’s restrained performance reveals the protagonist’s calmness. Kyoji does not belong to the category of patients who “scream in pain” but to those who “put up with pain and drip in sweat”. However, the protagonist’s humanitarian attitude is depicted in an ambiguous manner. In his long monologue during the film’s climatic moment, Kyoji confesses the constant struggle against his carnal desire, admitting that “my conscience is killing my desire”. If in the good-bye sequence with Misao he tries to hide his sadness behind a smile, in this scene in which he confronts the nurse Rui, the actor’s facial expression and body language expose Kyoji’s inner torments and his vulnerability. Walking restlessly in the small room, he spits out all his bitterness and misery.

The young physician sacrifices his true love and devotes his life to his poor patients, as the last shots, which show him during an operation, confirm. However, his motivations are not exclusively explained by altruism, as the scene with Rui reveals and as Kyoji’s father expresses in a laconic manner after having learned that his son is considered a saint by the people in his neighborhood: “A saint? My son is a saint? […] He is just trying to give hope back to the people who are unhappier than he is. If he had been happy, he might have become a snob.” The father’s slightly ironic comment shows how much the very notion of truth is multifaceted. 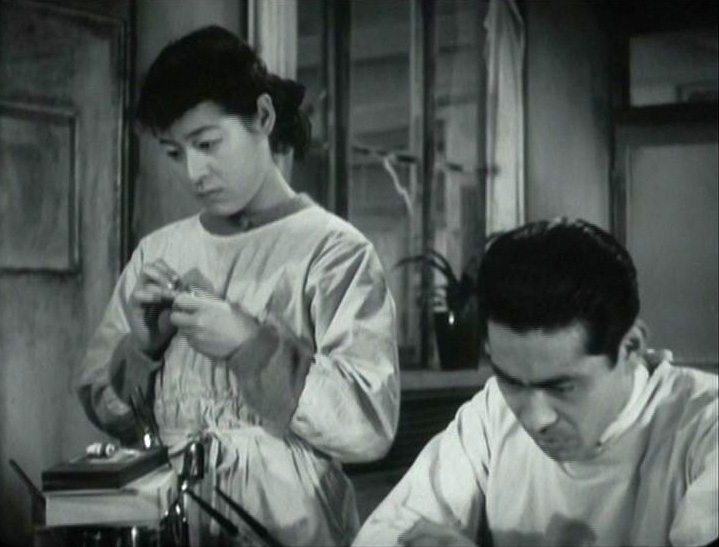