William Shakespeare’s The Tragedy of King Lear was the main inspiration for Akira Kurosawa’s Ran, and this French-Japanese production shows many thematic and narrative similarities with Shakespeare’s play. Both works depict the fate of a man who has fallen from grace: Lear in the English play, Hidetora in the Japanese film. Both protagonists are old men with three children (Hidetora has three sons rather than three daughters), the youngest of whom dies. In both the play and the film there is a blind man (Gloucester and Tsurumara) and a fool. Just like Lear’s fool, Kyoami, perhaps the most Shakespearean character in the film, exchanges roles with his master, who sinks more and more deeply into madness. The protagonists in both the play and the film are seen wandering aimlessly in an inhospitable landscape (a heath and the wilderness), and both complain about their fate. Kurosawa adds many other influences from Eastern and Western culture in his film, mingling film and theatre, Shakespeare and Mahler, Noh and jidai-geki (period film).

Ran cannot be classified as a conventional adaptation and is far more than the mere transposition of the Elizabethan play into the context of a Japanese period film. Kurosawa simplifies the story and at the same time creates a work of great richness which is utterly his own. “Why is it that human beings aren’t happy?” is a question that permeates his whole oeuvre and resonates through Ikiru, I Live in Fear, Throne of Blood (inspired by Macbeth), and in Ran, too. The Japanese setting and the period costumes and objects provide more than an exotic background – they are part of the visual strategies which create both texture and meaning. The very essence of the film lies in its dramatic and visual imagery, which itself is rich in meaning. Style and image become metaphors, and the mise-en-scène is transformed into the signified. 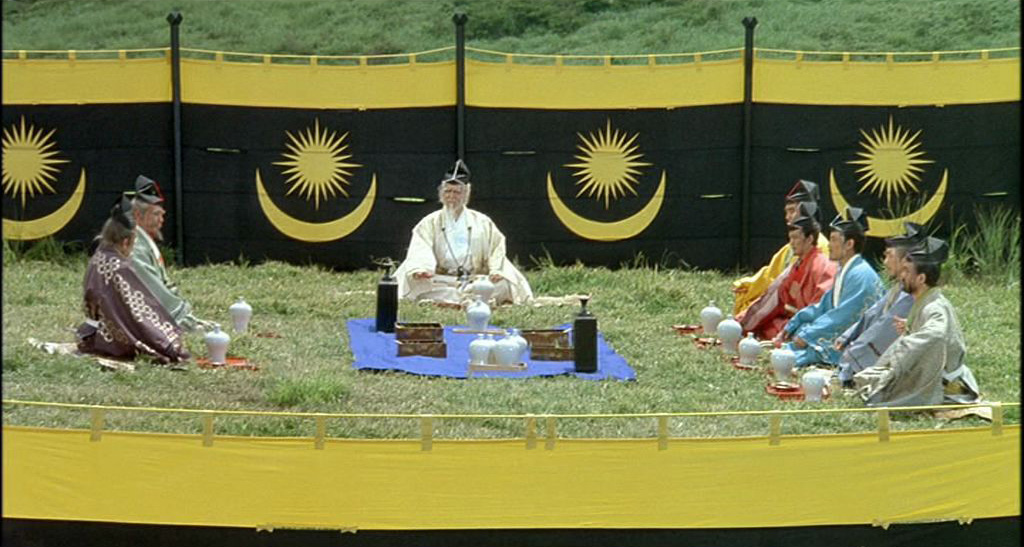 The Noh is the core of all Japanese drama and is the theatrical form Kurosawa preferred to kabuki. It already influenced Throne of Blood, The Lower Depths and Kagemusha. The focus on symmetry and asymmetry is reminiscent of the formal use of grouping made in Noh. In the first sequence of Ran, the symmetry is still intact – the hunters, resting after a successful hunt, are positioned on either side of warlord Hidetora, who presides over the celebration. At the end of the sequence, the image of wholeness is broken once and for all. The harmony inherent in symmetry has been damaged and will continue to disintegrate. The destruction of symmetry by means of quick and sometimes violent movements becomes a visual metaphor of the turmoil suggested by the film’s title (ran means literally turmoil or chaos). 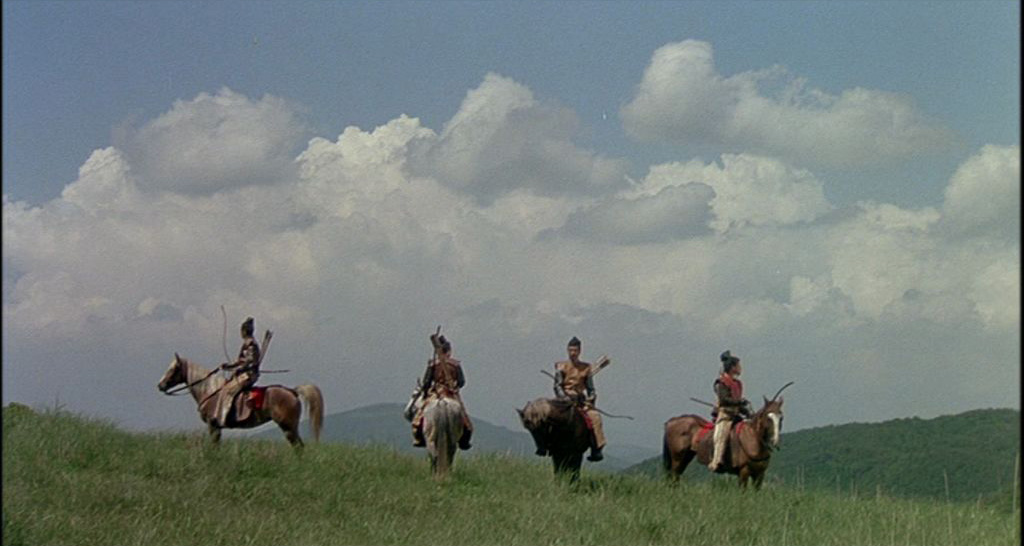 Gestures are hieratic and stately, reduced to a ritual-like formalism. The confrontation between Lady Kaede and Jiro is only one of several masterfully choreographed moments in the film, a magnificent juxtaposition of the static and the dynamic. Interior and location shots enhance the film’s stage-like quality, which is established right at the beginning. The riders in the opening sequence seem motionless, mere figures positioned purposefully on the hillside. They start moving in a slow, almost imperceptible manner before there is a cut to a boar, making the viewer realize what the men are waiting for. These shots are followed by the hunt itself, filmed in an exaggeratedly dynamic way. Once again, stillness and movement alternate in a highly elaborate series of shots. The fragmentation achieved by means of rapid movements and editing is a further technique that is employed to work against cinematic naturalism. In contrast to Western realism, Kurosawa became, from Red Beard on, more and more interested in unmasking the conventions he makes use of. The recourse to Noh formalism, celebrating presentation over representation, emphasises this approach. 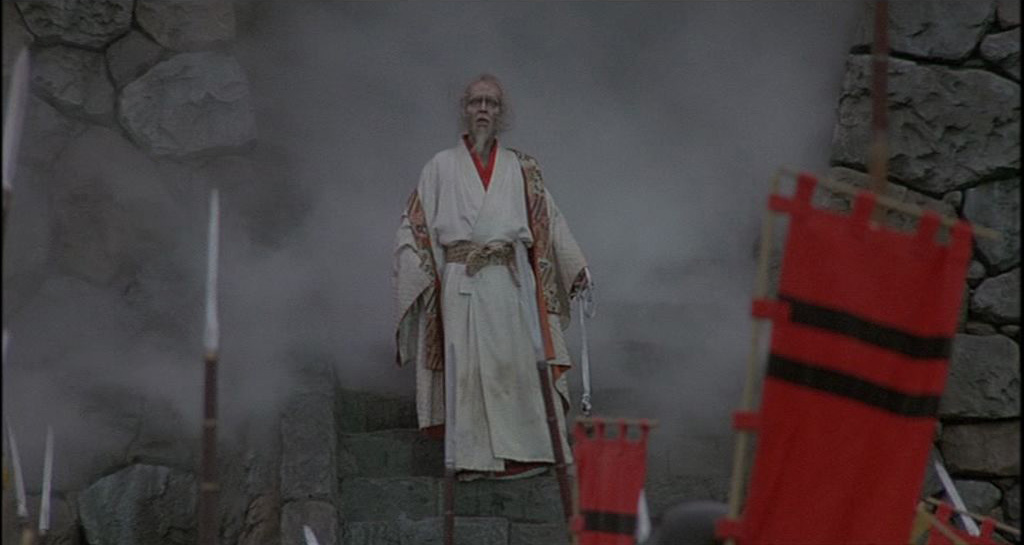 The sumptuous costumes and the make-up are elements that echo Noh tradition. In the character Tsurumaru, Ran evokes the Noh figure of the madwoman and thereby toys with the ancient convention of male actors playing women’s roles. Hidetora mistakes the slim young man whose long hair covers part of his face for a woman. Tatsuya Nakadai in the leading role is almost unrecognisable. His face, covered with unnatural make-up, and the white tufts of his hair and his beard are strongly reminiscent of Noh masks. Unlike Lear, Hidetora becomes increasingly silent. With his face a mask of pain and relying on a few restrained gestures only, Nakadai’s magisterial performance hints at the inner torment of a man losing his mind.

Tōru Takemitsu’s score refers both to Noh music conventions (the use of flute and percussion instruments) as well as to Gustav Mahler’s First Symphony. Pauses in the music in Noh drama are as important as silence is in Ran, where it becomes an essential bearer of meaning. In the long battle scene at the second castle, sound effects are suppressed; music is overlaid, and this reinforces the feeling of artificiality. The violent movements freed of any natural sounds recall Kurosawa’s penchant for silent films, and this subverts realism even more.

The colours are exquisite and follow the director’s strategies of symmetry and asymmetry. According to Japanese philosophical and aesthetic concepts, nature is regulated. Here it is the setting against which human tragedy is played out. Natural phenomena are turned into subtle visual metaphors. Clouds, the sun, and the wind are references to inner turmoil, upcoming tragedy and the illusion of hope.

One important difference between Shakespeare’s play and Kurosawa’s film lies in the fact that the Japanese director explains the behavior of his protagonists by giving them a background story. He recalls the ruthless methods the old warlord employed to acquire power. Lady Kaede is a character combining traits of Goneril and Asaji, Kurosawa’s Lady Macbeth in Throne of Blood. However, her hatred cannot be explained simply as lust for power. Her main objective is to take revenge on Hidetora, the man who killed her family.

There is little violence depicted in Shakespeare’s play. Kurosawa’s film not only mentions the slaughter of families but also shows extended sequences of carnage and graphic violence. Hidetora wading through blood is himself a distributor of violence. He kills in cold blood a man who attacked his fool and is intent on burning down the villages of those farmers who refused to give him shelter.

According to Kurosawa, Ran depicts human events seen from the heavens. The heavenly perspective, emphasized by a series of shots of stunning cloud formations, ranging from white cumulonimbus clouds and celestial blue to dark forbidding thunderclouds, punctuates the film. Hidetora and Sué are framed in front of a reddish sky at dusk, which presages death and the end of their world. The last images are those of Tsurumaru, left alone and helpless in the ruins of his family’s castle, earlier destroyed by Hidetora. Moreover, the scroll with the image of Amida Buddha which was supposed to protect him has accidentally fallen to the ground. The camera lingers on the peaceful portrait of the celestial Buddha, who embodies infinite goodness and offers rebirth. Does it still bear a glimpse of hope? Kurosawa’s worldview is pessimistic, leaving no place for empathy or cheap identification, and states only how much the human condition is a tragic one. Atop a parapet, the blind youth Tsurumaru is suspended between life and death. In the film’s last three shots, each increasing the distance from the camera, he becomes smaller and smaller in the emptiness of the landscape. The human being, a mere figurine, is transformed into a symbol of his own insignificance as Hidetora’s fall and the destruction of his family are mere footnotes in the history of mankind.