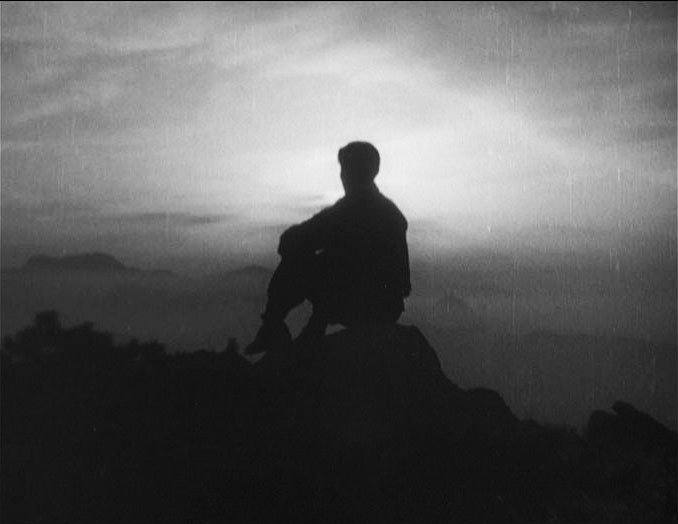 In terms of film history, Snow Trail (Ginrei no hate) is worth looking at simply because it marks the screen debut of Toshirō Mifune. The unusual setting of this gangster film, directed by Senkichi Taniguchi and co-written by Akira Kurosawa, is another significant aspect. The hunt for the criminals takes place not in an urban context but in the Japanese Alps. The wintry scenery in Hokkaido, where the film was shot, takes on a variety of dramatic and symbolic functions that reveal human attitudes and universal values.

Three bank robbers – Nojiri (Takashi Shimura), Eijima (Mifune) and Takasuji (Yoshio Kosugi) – escape into a remote mountain region after holding up a bank. The police at their heels, they find themselves trapped in a snowbound mountain pass. Takasuji is killed by an avalanche, but his two associates find refuge in a ski lodge run by Haruko, an adolescent girl (Setsuko Wakayama), and her grandfather (Kokuten Kōdō). While Nojiri enjoys their hospitality, Eijima is wary of their friendliness and eventually forces Honda, a young but experienced mountaineer (Akitake Kono) who is also staying at the lodge, to lead him and Nojiri through the snowbound pass.

From the very beginning, nature and weather conditions are shown as dangerous for those who come to this mountain region unprepared. Shots of the bodies of the criminals while fighting their way through a snowstorm depict great physical effort, and close-ups of their faces reveal their exhaustion. The almost ceaseless wind enhances the tension permeating the whole film, and Akira Ifukube’s haunting score contributes to the atmosphere of thrill and danger. 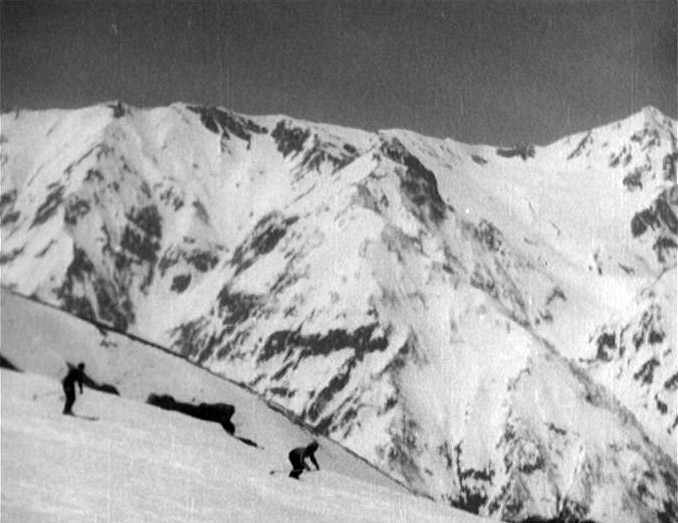 However, the portrait of the wintry natural setting is double-faced as the stunning cinematography reveals the beauty of the scenery, the calm and peace of the huge snow-covered landscape and the majestic peaks. In a long sequence, Haruko and Honda enjoy skiing in the virgin snow. This is a moment of pure enjoyment with no dramatic function in the story, but it is meaningful for the portrayal of the characters and the film’s reflections on human life.

The symbolism associated with winter and nature is clearly expressed by framing and lighting devices. There are breathtaking shots of the characters high above the clouds, and the human figure is reduced to a miniature in the wide expanse of the landscape. The material interest, expressed by Eijima’s frequent glances at Nojiri, who keeps the booty wrapped in a furoshiki, is challenged by the struggle for survival and the magic of nature, which render the petty quarrels between men insignificant.

Honda refers several times to the “Rosenmorgen” (“rose morning”) – that moment at sunrise when the snow takes on a pink tinge. The black and white photography is quite adequate to suggest impressions of great beauty. Views of Honda, filmed against daylight, recall paintings by Caspar David Friedrich. Not unlike the works of this German artist of the Romantic period, the cinematography transforms the landscape into an emotive subject, capturing man’s reunion with his spiritual self while contemplating nature. 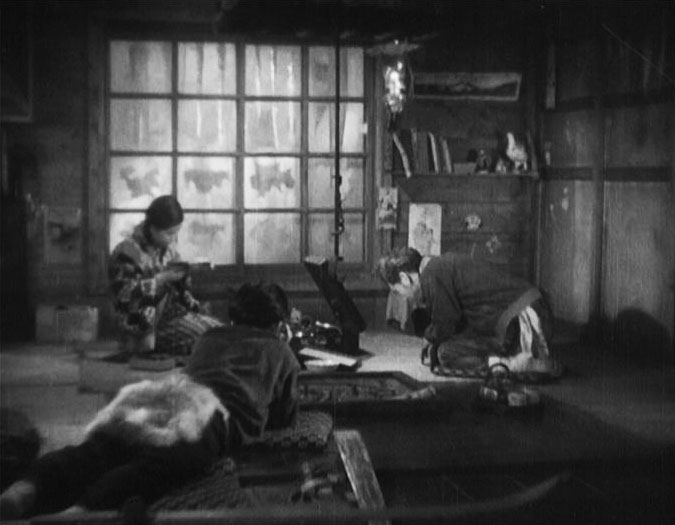 The three people in the ski lodge – Haruko, her grandfather and Honda – live in harmony with their surroundings. Nojiri, the older of the two bank robbers, is captivated by the simplicity of their lifestyle and their sincerity, and is eventually won over. The tiny wooden lodge, half buried in deep snow, is a harbour of peace in the middle of a hostile natural environment.

For Eijima, who is not receptive to the atmosphere in the lodge (he compares the bunks in the room where they sleep with a prison cell seen in foreign films), the mountain pass is simply a route of escape from the police. For Nojiri, the escape represents an inner journey. The encounter with Haruko, who reminds him of his own dead daughter, is also a reminder of long-forgotten solidarity and friendship and a harbinger of hope. Human charity and the girl’s purity transcend the wintry cold. 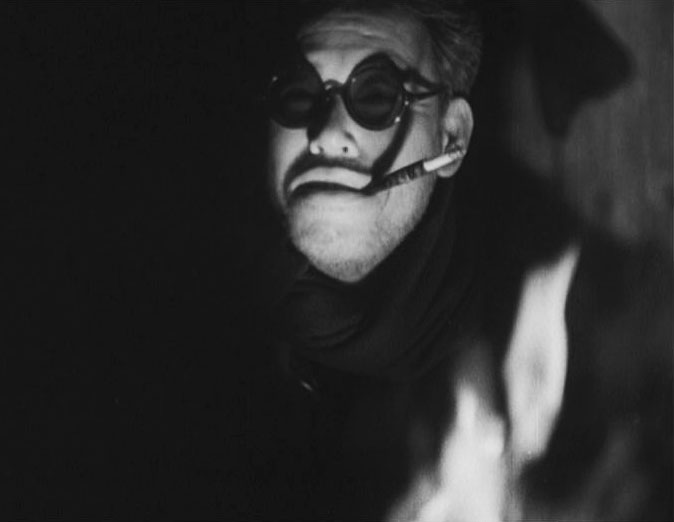 Nojiri is introduced as the leader of the three criminals, a man who does not hesitate to impose his authority with a gun. His transformation from tough guy to a caring and protective human being is expressed through changes in his outward appearance and Shimura’s subtle performance. At the beginning, Nojiri hides his eyes behind sunglasses. A cynical smile added to this disguise makes him appear a cool, self-confident man in control of events – a true professional. 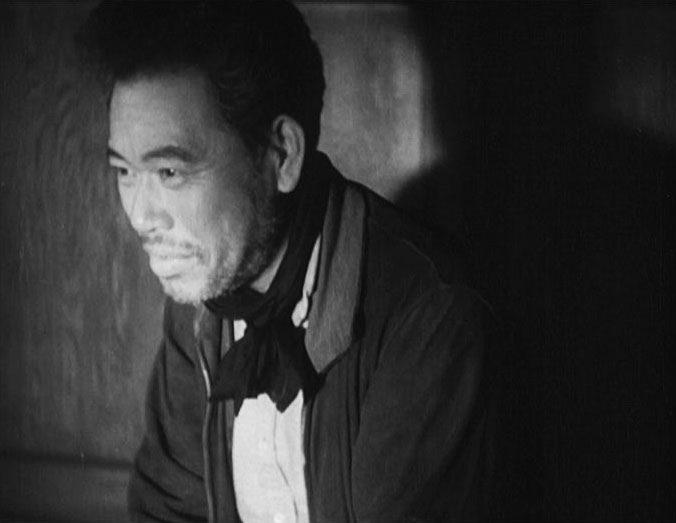 In the lodge, he is at first the observer of the modest but happy life the old man, his granddaughter and Honda lead. The way he looks at them reveals his fascination and his regrets. Later, he becomes a member of this small community, helping the others and chatting with them. He no longer wears his sunglasses and the experience of feeling at home makes him beam with joy. He is prepared to risk his life in order to rescue the injured Honda in the mountains. Throwing away his pistol is another meaningful gesture on his path to redemption. 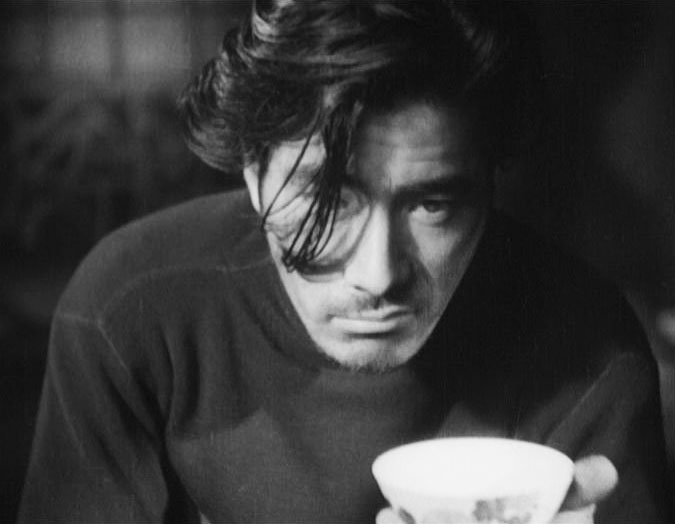 Nojiri turns out to be a modest and humble man. Eijima, in contrast, is depicted as a reckless and aggressive youth. He mocks Nojiri’s feelings and shows contempt for the simple life in the lodge. Unable to perceive the beauty around him, he remains excluded from moments of happiness the older man enjoys. His angry request to stop the music which Haruko, Honda and Nojiri are listening to destroys the idyll of the moment. 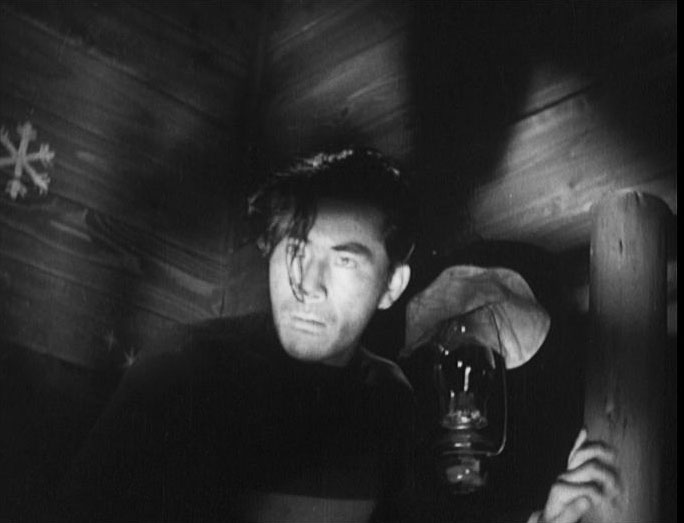 A highly suggestive shot/reverse shot opposes the homely interior with a wild-looking Eijima emerging from the shadows. A feeling of fear and danger emanates from his glowing eyes and from the expressionist lighting, which matches his dark character perfectly.

The wintry mountains are a universal place in which human behaviour is revealed, but contemporary issues of Japan in the aftermath of war and defeat are not directly addressed. This choice meets the requirements of the American censorship. However, the search for identity was an important topic for Japanese filmmakers in the second half of the ‘40s. The idea of reconciliation is linked to this concern with identity and individuality.

Considering that the film was made during the Allied occupation of Japan, it is, perhaps not surprisingly, the American song “My Old Kentucky Home” that the idea of home and homecoming is associated with. The song amazes Nojiri (a homecoming soldier?), who discovers that people in the East and in the West share similar values. However, the use of the song reminds us of the cultural openness of Japanese filmmakers and a cinema and culture that shows a great variety of cultural influences.

The disrespectful Eijima with his continuous complaining is far more than a greedy criminal. He is Nojiri’s evil doppelgänger, a male whose sole source of power is his gun. Mifune’s intense performance reveals Eijima as both malicious and pathetic. However, it emphasises the character’s rebellious side, which made the character attractive to Japanese moviegoers.

Although dealing with individual choices and collective responsibility, Snow Trail also addresses universal questions of guilt and redemption, life and death. The film points to the need for healing – both for the individual and for society. In Buddhist thinking, white (here: the almost omnipresent whiteness of the snow) refers to purity, self-mastery and redemption – themes that are revealed in the characters and their actions.

Snow is closely linked to impermanence, another important motif of Buddhism that permeates Japanese culture. It evokes the fragility of human existence but, within the cycle of life and death and that of the seasons, it suggests hope and the upcoming springtime that the protagonists are looking forward to.