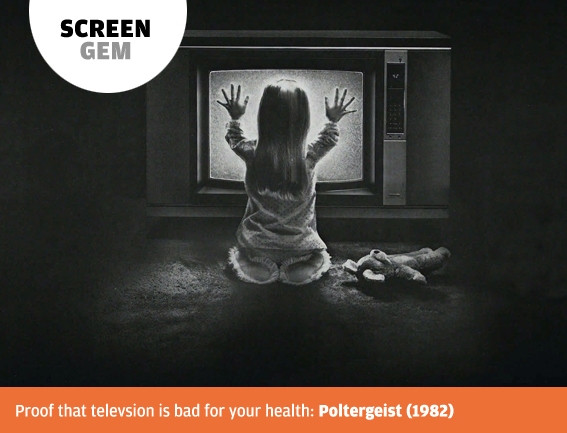 Malignant horror can most effectively be found through forums which are accessible to all, no matter who or where you are. So how better to transfer its influence than by means of such an innocent, yet so intrinsic, part of modern-day life – the humble television set.

Over the years there have been countless cinematic representations of portals to the ‘other side’. None though have been more shocking than when Steven Spielberg and Tobe Hooper transformed an outwardly innocuous television set into a medium for transmitting insidious and seeping evil in Poltergiest, the pivotal shocker of the American consumer driven age. Though only listed as the film’s producer and writer (contractual obligations with Universal prevented him from directing any other film whilst working on E.T., which he was making at the same time), Poltergeist bares Speilberg’s unmistakable mark. Released within weeks of E.T., making it a double whammy for Speilberg during the summer of 1982, Poltergeist perhaps better than any of his other films, showcased the secret which has made him one of cinema’s greatest showmen – the knack of placing ordinary people with whom audiences can relate, in extraordinary situations. It is the film’s depiction of the everyday, almost mundane routine of family-life – holding down jobs, getting everyone out in the morning, enjoying a little ‘downtime’ once the kids are in bed – which resonates with the viewer, making the supernatural onslaught all-the-more disturbing when it eventually unleashes its full fury.

The horror of the situation is brought home by the spectral entities main choice of victims, side-lining the adults in favour of the younger members of the Freeling family, Robbie and his baby sister Carol Anne, played with undefiled innocence by blonde poppet Heather O’Rourke. It is further emphasised by the spirits initial means of entry into our world through the ubiquitous television set. The eagle-eyed will observe that almost every room in the Freeling’s house has one, subtly showing the hold it has on modern society. As only right the television also has the film’s last word when Steven Freeling symbolically casts one outside of the motel room in which he and his bedraggled family take refuge during the film’s closing credits.

Despite spawning two sequels, the impact of the original was never equalled. Rumours abound that the curse of the Tinsel Town remake will soon be visited upon the film. However, seeing that its lasting appeal is as dependent on the overpowering presence of both Spielberg and O’Rourke – who starred in the film’s two sequels and who tragically died after shooting finished on Poltergeist III (1988) – as of the television set itself, it’s doubtful whether revisiting this particular haunted house will still have the same ability to shock.