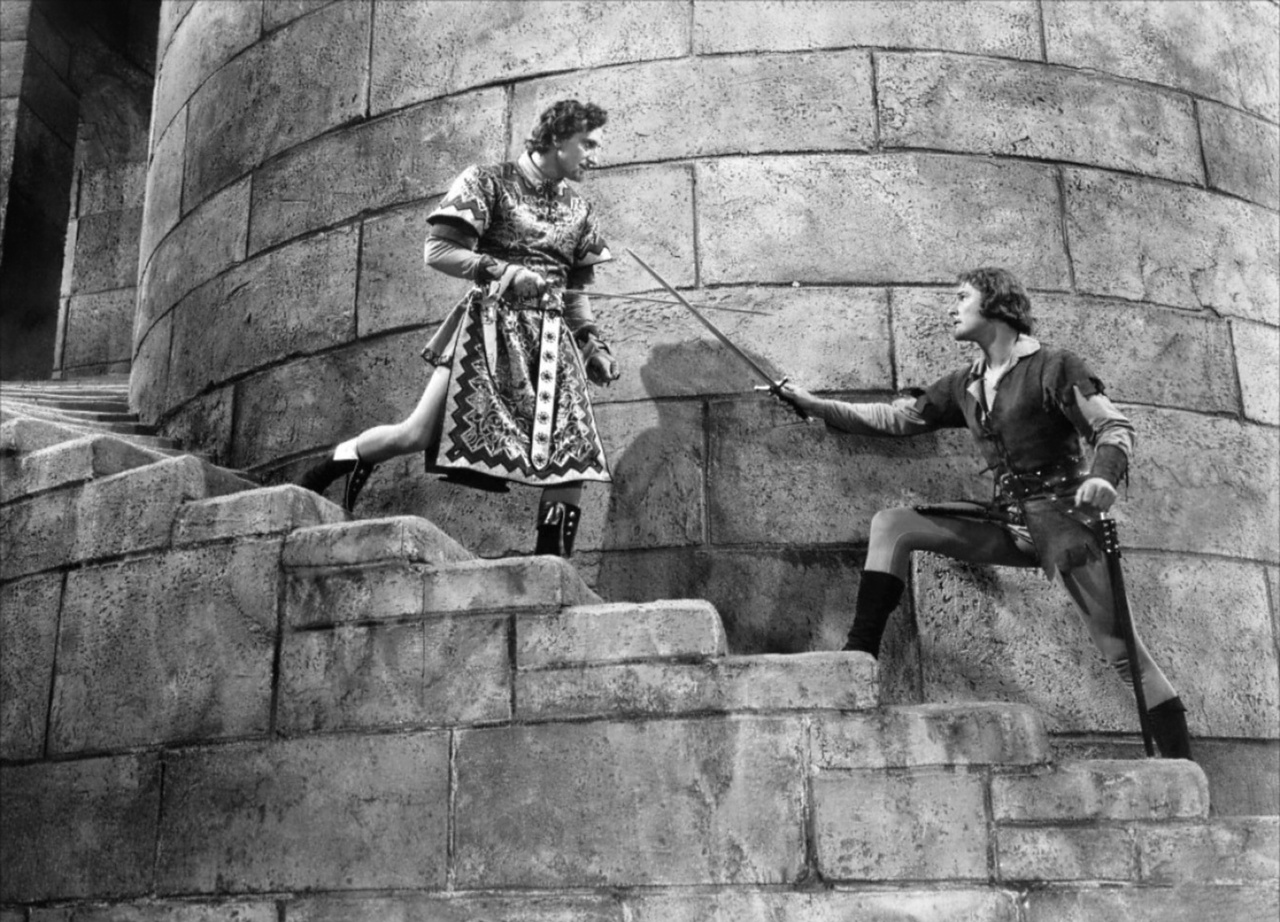 During the late 1930’s, no period Hollywood adventure was complete without Errol Flynn or Basil Rathbone. These two men epitomised the archetypal male from the golden age of the silver screen – rakish, suave, and debonair. The swashbuckling extravaganzas in which they starred reached their zenith with the technicolour fantasy The Adventures of Robin Hood, starring not just one but both of these legendary adventure actors.

Robin Hood encompassed everything intrinsic to the genre: maidens in distress, wronged heroes fighting to clear their names, and dastardly villains with evil plans for their own advancement. The film climaxed with a typically energetic fight scene (choreographed by legendary Hollywood fencing master Fred Cavens) – a fight to the death between Flynn and Rathbone, in the guise of Robin Hood and his archenemy Sir Guy of Gisbourne. 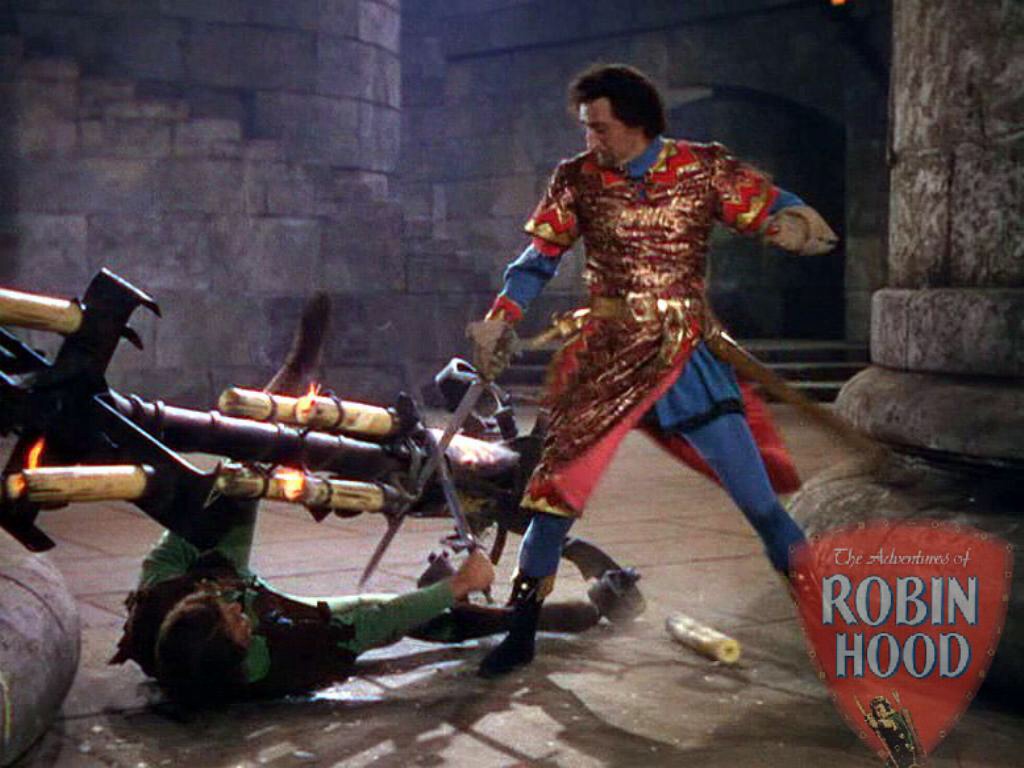 More than the men themselves, however, it was the spiral staircase on which the initial parries of their final confrontation took place that overshadowed the action of the film’s closing scenes. Twisting round the exterior of one of the internal support pillars of Gisbourne’s castle where the action played out, this flight of stone steps formed the perfect platform for the two protagonists to nimbly descend as their deftly avoided the cut and thrust of the deadly duel.

Watch carefully as the scene unfolds. Upon reaching the staircase’s midway point, Flynn and Rathbone – replaced by stand-ins Post Park and Fred Graham (credited with the obscure title ‘staircase fall stunt double’) – fall and jump to the flagged floor of the castle’s great hall beneath. As the two men continue their sword-fight amongst the candelabras and paraphernalia of the medieval fortress, their shadows cast high against the stone of the castle walls, the same staircase lurks in the background, offering a potential escape route. 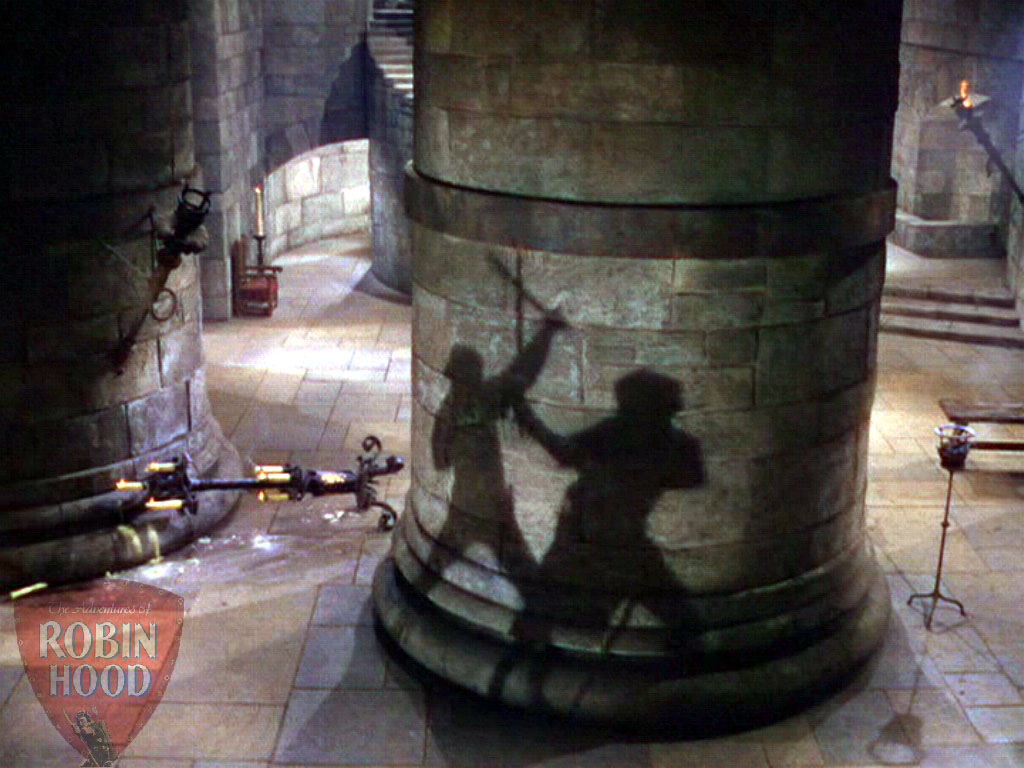 The cold greyness of the stone, as well as the sheer magnitude of the majestically towering sets, emphasises Flynn and Rathbone’s characters, throwing them into stark relief by their vibrantly coloured costumes. These various features, bound together by Erich Wolfgang Korngold’s rousing score, serve to make the stuff of Hollywood magic.  Though Flynn and Rathbone continued to appear in these kinds of films for years to come, they never again reached the heights to which this staircase to the stars led them.