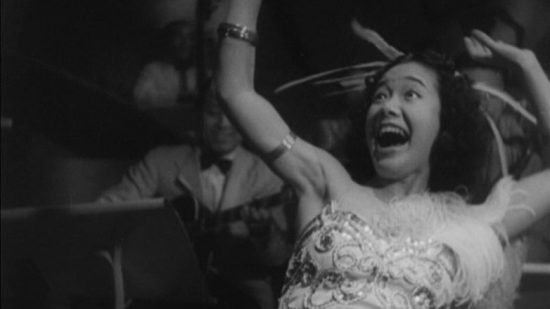 Drunken Angel (Yoidore tenshi, 1948) is Akira Kurosawa’s first film in which music, used at both a diegetic and non-diegetic level, plays an eminent structural role. One key scene is set in “Club Number 1,” a dance hall in the slum in which the action takes place. In this scene, the jazz song “Jungle Boogie” is performed by Shizuko Kasagi, a big star of the late 1940s whose honorific nickname was “Queen of Boogie-Woogie.” Famous composer Ryoichi Hattori made the music, and Kurosawa wrote the lyrics himself.

The scene starts with a general shot showing the young yakuza Matsunaga (Toshirô Mifune), one of the two main protagonists (the other, played by Takashi Shimura, does not appear in this scene), and Okada (Reizaburô Yamamoto), an elderly yakuza recently released from prison. Alternate editing reveals simultaneous, closely-linked actions: the singer’s performance, Matsunaga’s mistress, Nanae (Michiyo Kogure), dancing with Okada, and Matsunaga dancing with a prostitute.

During the performance of the song, the power shift in the gangster world of the yakuza becomes obvious. Matsunaga, a young man who runs a section of the black market, is losing control of his position, of his mistress, and of himself. At the beginning of the sequence, Matsunaga (dead-drunk and eager to please Okada, whom he addressed in an earlier scene in a servile manner) asks Nanae to dance with Okada. The latter turns out to be Matsunaga’s rival in love and business matters, for he is going to take over Matsunaga’s black market territory.

Shortly after this scene, Nanae leaves the critically-ill Matsunaga, who is suffering from tuberculosis, to live with Okada. The link between the singer and Matsunaga’s mistress is established by means of a series of alternating shots showing Nanae looking at Okada off-screen, the singer, and Nanae and Okada dancing. In a subsequent scene in which the rivalry between the two yakuza is revealed, it is Nanae who chooses her dancing partner, preferring Okada to Matsunaga. Here, the music, a jazzy version of the habanera from Bizet’s Carmen, underlines her role as the treacherous femme fatale. 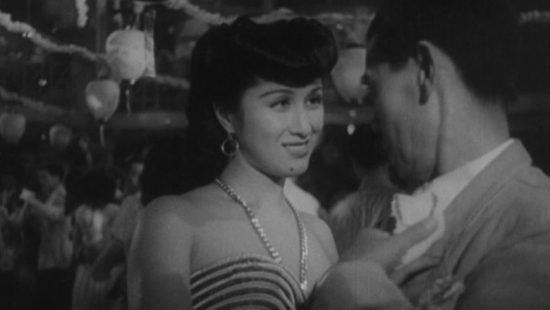 Throughout the film, jazz music is associated with Matsunaga, the new man of the New Japan, which is re-emerging from its ruins. Jazz music, relayed by loudspeakers, resounds in the alleys of the slum that is Matsunaga’s territory. In 1948, the ban on representing the Occupation onscreen was still in force. The (American) victors are an absent presence which the music, including the “Jungle Boogie,” constantly refers to.

It is not only the music but also the way Matsunaga dresses (his patterned shirts and white suits with large shoulder pads) that establishes a link to the lifestyle imported from the West. Okada too has exchanged his kimono, which he wore in his first appearance in the film, for Western-style suits. Yet, he prefers less flashy clothes, and his demeanour is always more reserved. He may sometimes be drunk, but he does not show it. He is a man in control, whereas Matsunaga, whom he gets drunk, is (not unlike the woman in the song) “crazy with love” for Nanae. 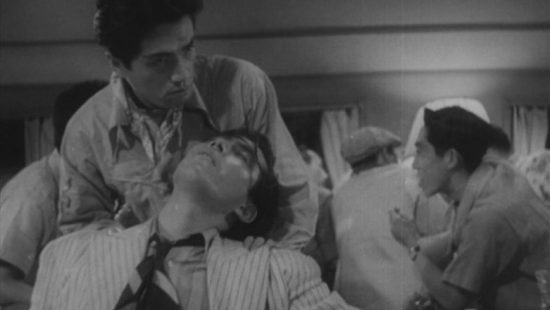 Kasagi’s performance and the beaming faces of the musicians in the orchestra behind her express a newly-regained joie de vivre and a great hunger for life. In contrast, Matsunaga is only a shadow of his former self, the symbol of a lost generation and of a sacrificed youth that has been betrayed twice: first by the military government of the war period, and then by the new rulers in a country which is still permeated by the same power structures.

Okada represents the old, patriarchal Japan and the yakuza system in power again, whereas Matsunaga embodies a new masculinity, which is opposed to the monolithic masculinity highly valued during the war. His feverish dance reveals the unrest and vulnerability of a young man who is only the poor imitation of his Western models. He is not the self-controlled Japanese man but the caricature of a wild animal and a feminized, weak male. His identity, as well as that of the nation, has been eroded after the defeat in war and by the superficial adoption of a new set of values.

Western music and clothes associated with the yakuza suggest a strong relationship between the Occupation and crime, projecting onto the American victors the image of the undesired other. Behind the mask of democracy and freedom lurk the violence and corruption of the black market, reflecting the chaotic conditions in Japan after World War II. It seems that the censors did not understand the reference to this connection, for its clearest representation is the “Jungle Boogie” sequence.