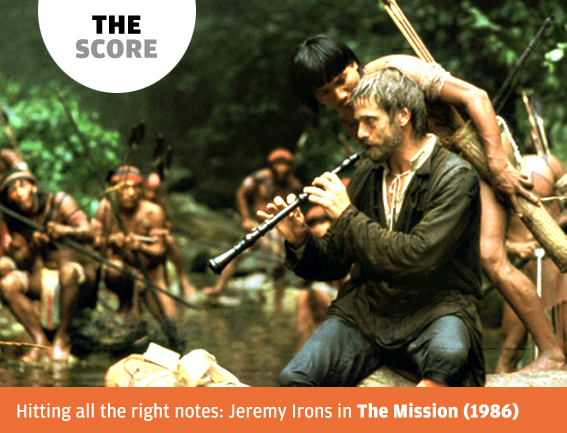 Roland Joffé’s film is the ambitious, visually lush story of 18th century Spanish Jesuits in South America struggling to convert the indigenous tribes to Christianity while warding off impending rule by the Portugese. Cinematographer Chris Menges beautifully captures both the tranquility and hostility of the primal rainforest and there are excellent performances from Jeremy Irons as kindly Father Gabriel and Robert De Niro as the reformed Rodrigo; but the most fondly regarded aspect of the production must be Morricone’s score.

Out of an astonishing 400 odd efforts, it may be his most iconic. Not bad when the back catalogue includes the Sergio Leone westerns, The Untouchables and Cinema Paradiso. Controversial? Well, that isn’t to say it’s Morricone’s most popular, or indeed most famous – but in terms of film scores that transcend the classical sphere, crossing over into the pop mainstream (as mentioned, invariably on compilation CD), The Mission must be top of the list. 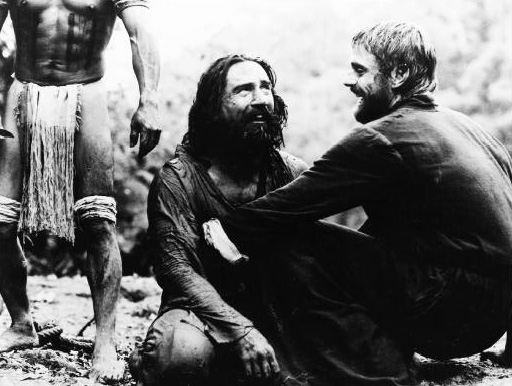 Much of this credit could be attributed to one of cinema’s greatest themes, ‘Gabriel’s Oboe’, a staple of easy listening since its release. Morricone reportedly took inspiration from Jeremy Irons’ random finger placements on the instrument and it’s a testament to his skill that it morphed into such an influential and gorgeous piece.

However, it would be churlish to centre all the attention on one track. In truth, the album is overflowing with heavenly melodies, exotic instrumentation and moments of brooding anger, in keeping with the film’s themes of repressed violence and redemption. A master at turning out stunning melodies seemingly on a whim, the opener, ‘On Earth as it is in Heaven’ (actually the end title track) is one of Morricone’s most inspiring scene-setters, mixing the four note main theme in a choral arrangement with the oboe theme, jungle percussion and liturgical chanting (courtesy of group Incantation).

The early spells are where most of the melodic highlights come, before the score’s descent into darkness and violence later on. ‘Falls’ gives full reign to the central theme and is an especially moving piece, adding the shakuhachi wood flute to the mix; ‘Ave Maria Guarani’ features more stunning, if experimental, choral work; and ‘Brothers’ and ‘Carlotta’ feature sublime arrangements for acoustic guitar, prior to the act of violence that sees De Niro’s Rodrigo ascend the waterfall as a penance for his crime.

Unsurprisingly, the redemptive qualities of ‘Climb’ and ‘Remorse’ are lovely, but ‘Penance’ itself is the first proper bit of darkness in the score, with clipped piano and percussion reminding listeners of Morricone’s more abrasive work (and the darkness existing in Rodrigo’s heart). We are then pulled into the light once more with an especially beautiful orchestral rendition of the main theme in ‘The Mission’.

As mentioned, the score then turns considerably darker, reflecting the film’s descent into tragedy as Gabriel’s mission comes under attack from the encroaching Portugese. The finale, from ‘Refusal’ through to ‘The Sword’ is tempestuous and disturbing, all shakuhachi blasts, trumpet triplets (recalling Morricone’s own western efforts) and plenty of discordant string work. Even the conclusive ‘Miserere’ is devoid of the vibrant humanity of earlier, with the choir coming across colder and more reflective, as one is left to ponder the failure of the mission and man’s battle with himself.

Indeed, one of the most refreshing aspects of the score is its refusal to stoop to the big romantic climax. By finishing on a deliberately sombre note, Morricone leaves one feeling thoughtful, rather than uplifted, a mark of his boldness as a composer and background musician outside of conventional Hollywood circles. It’s perhaps this willingness to experiment and use emotion more creatively that prevented him from winning the Oscar in 1986 – Herbie Hancock nabbed that for Round Midnight.

Whereas that score has slipped into obscurity though, Morricone’s rarely been better: there are plenty of soulful soundtracks, but this is one of an elite few that actually touches the soul.