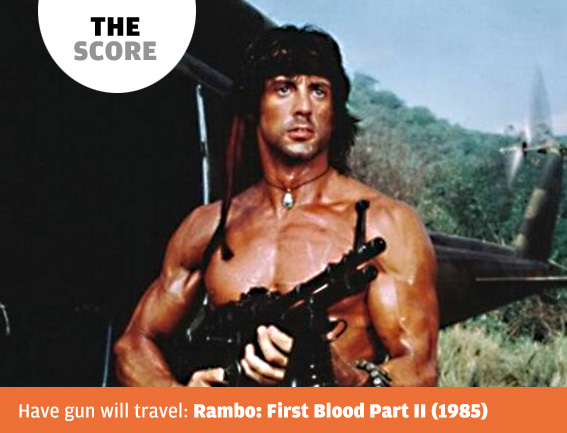 If ever a film made guys want to run around topless with a gun and a bandanna, Rambo:First Blood Part II was it – and Jerry Goldsmith’s ridiculously macho CD cover (not to mention the music!) confirms the suspicion. Sly Stallone’s second outing as John ‘get an extra supply of body bags’ Rambo was a very different beast from the taut, riveting original, instead amping up the action to cartoonish proportions and presenting a laughably unreconstructed view of Russian and Vietnamese villains.
It’s a great guilty pleasure though – and more than half the audience’s involvement is likely down to Goldsmith’s terrific score, generating tension far better than George P. Cosmatos’ direction. It has to be said Goldsmith worked on some lousy films during his distinguished career (in fact, most of them were lousy) – but they provided excellent opportunities to create a memorable musical canvas.
It’s important to note that the score came in the midst of Goldsmith’s heavily electronic phase of the mid-80s, an era that also saw classics such as Legend and Hoosiers. Few, if any, composers at the time, dared to be this revolutionary at integrating electronics and orchestra but Goldsmith was able to pull it off with an almost supernatural panache. Rambo II falls firmly into this camp. However, key to his success was the realization that synthesisers were a mere addition to the orchestra; the music therefore always has a core rhythmic backbone.
And no-one ever wrote (or likely will ever write) aggressive, uncompromising action music like Goldsmith. It’s there from the start, with Main Title sprinkling a dash of synths (including a bit of Oriental flavour to indicate the location) over a pounding rhythm. Instead of basing the score around the ‘Homecoming’ horn and guitar melody of the first film, he instead extracts the minor heroic motif heard when he drove through the police roadblock, and elevates it to main theme status. The end result is one terrifically exciting soundtrack. 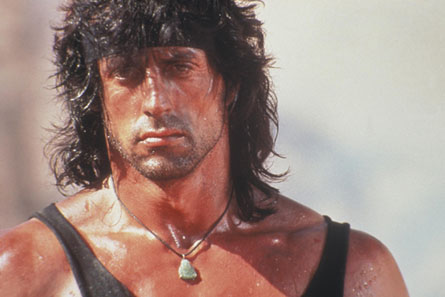 Continuing in the same vein, ‘Preparations’ builds the percussion to thrilling levels before all hell lets loose for the first time in ‘The Jump’, underscoring Rambo’s botched attempt to parachute into the jungle. ‘The Snake’ then moves the action material ahead through a greater sense of movement before things quieten down. Goldsmith’s patented stop/start suspense pieces take over as Rambo infiltrates the Vietnamese prison camp; minor orchestral crashes subside as creeping strings and winds take over, before it builds to another peak in the impossibly exciting ‘Betrayed’.
It’s in pieces such as this that Goldsmith sensibly drops the electronics and ratchets up the orchestral muscle, something today’s Media Ventures-weaned composers should learn from: the key isn’t in generating maximum volume but taking listeners on a rollercoaster ride – and there’s no-one better at the helm than Goldsmith. Situations are built up then allowed to subside, before picking up again.
The late arriving ‘Escape from Torture’ is a masterpiece of action scoring, a synth stinger leading into a brilliantly heroic rendition of the main theme guaranteed to have listeners punching the air in triumph. As ever, Goldsmith’s use of brass is especially commanding, with the electronics and strings keeping careful time underneath. ‘Ambush’ even brings in the first strains of a lovely romantic theme, courtesy of Rambo’s partnership with mercenary Co (Julia Nickson), before it’s abruptly cut short. ‘Revenge’ subsequently skews a lot closer to Goldsmith’s sparser, more tense score for the original, the anger barely simmering away as he picks off his aggressors. 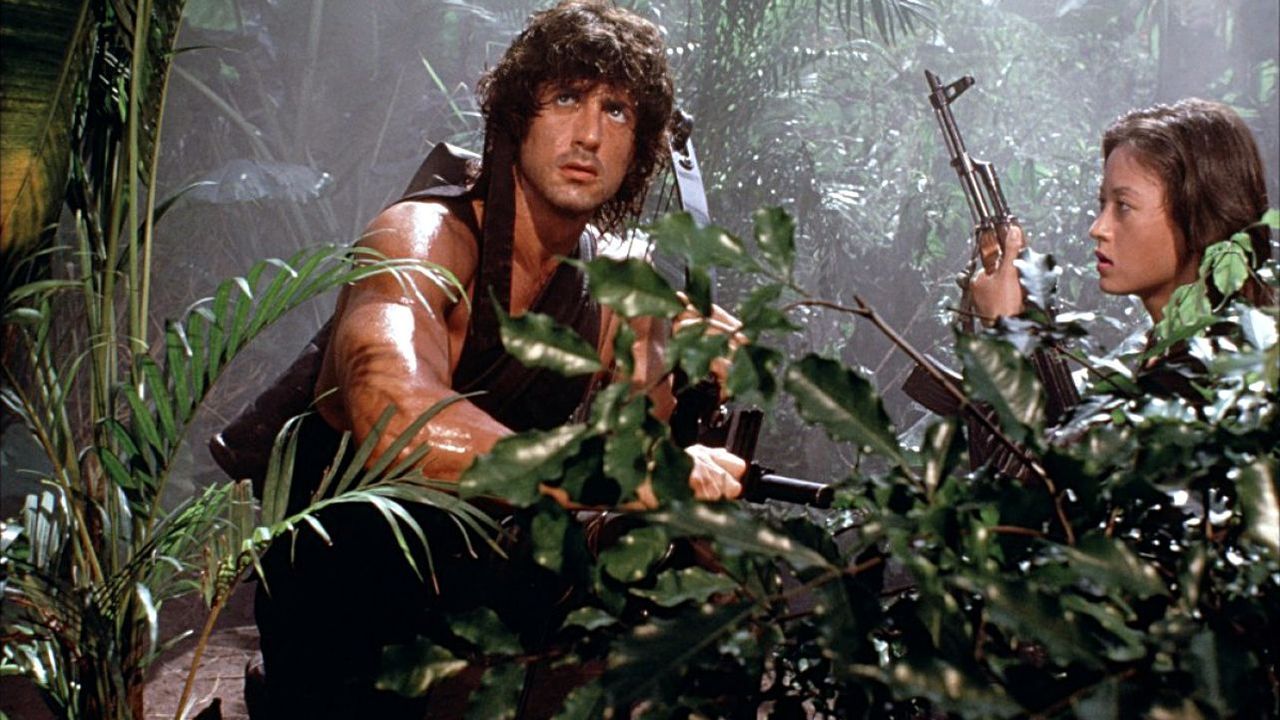 The score reaches its peak however in the magnificent triumvirate of ‘Bowed Down’/’Pilot Over’/’Village Raid – Helicopter Flight’, the electronics pushed even further aside as the hugely exciting action is handed over largely to the orchestra. Generating a palpable sense of danger and conflict, the pounding, athletic material is Goldsmith at his energetic best, the glorious renditions of the Rambo theme brimming with heroism, the timpani hits perfectly co-ordinated with every punch and explosion.
‘Home Flight’ then foregrounds the electronics once more as the martial rhythm reaches its purposeful, noble conclusion. ‘Day by Day’ then concludes the score proper with a melancholy variation on the main theme, as in the original, as Rambo reflects on the state of affairs that continue to draw him into conflict. It’s best to avoid the hideous number, ‘Peace in Our Life’, crooned by Frank Stallone that follows.
Jerry Goldsmith was a true original and pioneer and no-one else could have composed a score like this, for such a banal, trite action film, in such an intricate fashion. He was always a professional but blazing a trail brighter than anyone else, his action music possessed of an authoritative quality that is a pleasure to listen to (although he was perhaps unfortunately pigeonholed in the genre). Rambo II is one of his finest in the genre, alongside Total Recall and The Wind and the Lion.