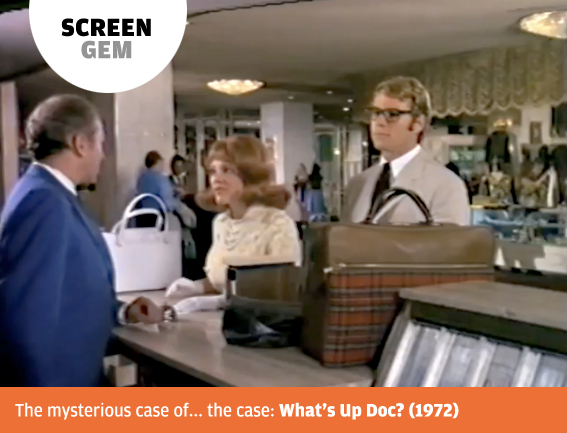 Once upon a time, there was a plaid overnight case… It may not have the heft of a dinosaur bone or the bite of a trained leopard, but the plaid (that’s tartan, to UK readers) overnight case in What’s Up Doc? is a far more effective spur to action than anything in Howard Hawks’s Bringing Up Baby (1938).

That’s all the more surprising, since Peter Bogdanovich’s latter-day screwball comedy is something between an homage and a remake of the earlier movie. Yet while Baby veers from incandescent word-play to sometimes forced and rather flat slapstick, What’s Up Doc? never hits a false note, and it’s thanks to that overnight case.

Or, rather, to four of them: one containing top secret government documents and another a stash of jewels; a third strains with the weight of a collection of prehistoric rocks; and the last overflows with Barbara Streisand’s frilly underwear. The mistaken identity comedy goes back at least as far as Shakespeare, but rarely has it been employed to such precisely calibrated chaotic effect. Throughout the story the four identical bags are swapped, swiped and switched as the documents are pursued by a pair of opposing spies, and the jewels are stolen by a corrupt hotel detective, all of which is only backdrop to Judy Maxwell’s (Barbara Streisand) preternaturally persistent pursuit of buttoned up ethno-musicologist Howard Bannister (Ryan O’Neal). The bags don’t create all the comedy on their own – razor-sharp wisecracks rattled off at a pace which could give Airplane (1980) a run for its money and a madcap car chase also carry their share of the weight, and Madeleine Kahn’s hen-pecking Eunice is one of the greatest comic characters in all of cinema. But a successful screwball comedy is all about pace.

The extended leopard-chasing and bone-digging scenes in Bringing Up Baby flag, forcing Hepburn and Grant to vamp until the film regains its footing. In What’s Up Doc?, however, whenever the pace might slacken, then the confusion over the bags motivates another bit of comic mischief. It precipitates the detective’s ‘seduction’ of the millionairess, Eunice’s trip to the mob hangout at the harbour, the old-west style fist fight at the home of a wealthy music-patron and, of course, the final chase scene with its panes of glass, wet cement, runaway trash cans and Chinese dragon. By the time we reach the end of the film, we’ve seen so many madcap stunts motivated by the bags that we don’t even bother to question why Judy and Howard don’t just check the contents and leave quietly with their clothes and rocks, instead of initiating the climactic car chase. After all, logic only goes so far in a screwball comedy, and when logic fails, what you need is a really good MacGuffin.