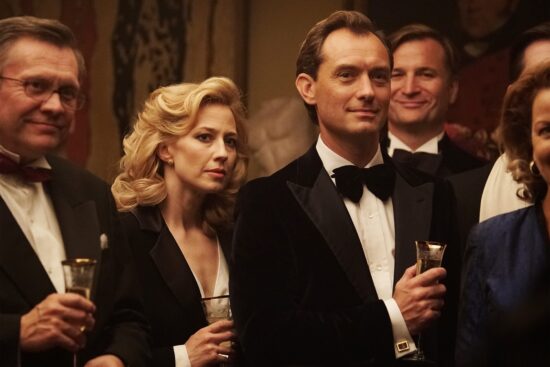 What remains if people let go of their illusions, or delusions? In one of the best films of last year, Sean Durkin’s The Nest (2020), Jude Law is Rory, a high-risk investment specialist who moves back to his native England from New York with his American wife, Allison (Carrie Coon, in a wonderfully paced performance), and their two children. We are in the 1980s. On the two sides of the Atlantic, Ronald Reagan and Margaret Thatcher are in power and money is king. Obsessed with the idea of ​​erasing his popular origins and using his looks and charisma to conceal the despair and unfulfilled dreams underneath, Rory dreams and breaths speculation, imposing his false ascent and exasperated desire for financial, social, and as ostentatious as possible success on the rich, and his narcissistic needs and bruised ego on his family.

The family is starting to crumble in the chilly and majestic English countryside, unearthing simmering tensions inside the marriage. The dark, unsettling atmosphere creeping in makes you pay attention to things beneath the surface. Allison sees beneath the surface, too. Even before their transatlantic departure, Allison confides in her mother that “something is wrong”. This narrative shift on Allison’s side (as Rory is gradually losing control, fidgeting in all directions, she finds herself seemingly motionless, but in the constant process of trying to balance everything that’s happening and ultimately the only one who could be capable of seeing past the ruins) is one of the elements that makes the film stand apart. Allison’s discomfort only grows deeper, nested in the austere mansion where Rory has settled them. In their Gothic confinement (“It’s too big for us,” Allison tells Rory when she first steps foot on the property), it is not the tormented spirit of a previous occupant that looms over. The threat is something very much human, driven by much-too-human motives, and is therefore much more disquieting.

What ensues is a seizing psychological and haunting marital drama that is as cinematically powerful and beautifully tailored as it is bitingly poignant for these times. Because what I particularly appreciated about The Nest and what made me completely immerse into it was that director Sean Durkin not only created a film, but created an entire world on film, so elegantly controlled, so skillfully staged with a sense of space and symbolism. In fact, artists of so many crafts wove the threads of the story that came alive on screen, the result of a very close collaboration of co-craftsmen.

In my interview with costume designer Matthew Price, we discuss Carrie Coon’s character and the defining role her clothes have on this journey we are taken on, digging into the subtle, timeless elements of 1980s fashion, the Italian sartorial influence for Jude Law’s Rory, and going to the movies, that unique experience of being individually wrapped in a story that is meant to be shared with others in the dark confinement of the movie theater. 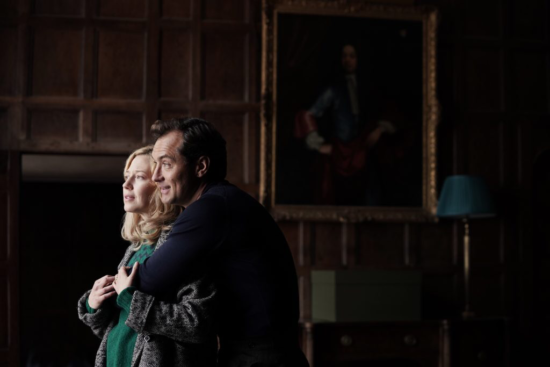 For the party scene at Rory’s boss’s house, Allison is wearing a tuxedo. In fact, both Allison and Rory are wearing tuxedos. How did you decide on her costume in this particular sequence?
Sean, Carrie and I had discussed a powerful silhouette for this scene. The other female guests are wearing more conventional 1980s evening dresses in a variety of deeper rich tones. We liked the idea of Allison standing apart somewhat in a monochrome dinner jacket trouser suit. It aligns Allison’s character with the other male figures in the room, sartorially speaking.

The story is set in the 1980s, a decade of excess and power dressing, and yet what I liked about your costume approach is that Carrie’s costumes are very subtle, they have a timeless appeal. What was the inspiration behind Allison’s wardrobe?
One of the first conversations Sean and I had was about how timeless and naturalistic the wardrobes should feel. So I took the subtler parts of the period and dug deep into those elements. Jane Birkin was an inspiration for Allison’s wardrobe. The ability to look effortlessly cool, practical, a bit tomboy yet graceful and when an occasion calls, confidently chic.

This is the perfect definition of the character, because what I thought when I saw her in a tuxedo was that, as it always is the case with women wearing le smoking, it makes her that much more appealing. She looks very attractive, not just because she is, but also because the occasion calls for a certain dress code and she chooses to do it on her own terms.
Exactly. In the same breath, she’s as comfortable mucking out the horses as she is at a more formal event.

A costume designer’s job is to reinforce the story and help the actor form an identity of his/her character. But what exactly goes into the work of a costume designer today? How much ready-made shopping, how much vintage and how much making did the costumes in The Nest involve?
It all starts with the scripts and research period which is such an exciting time. Usually when I read a script I’ll go directly to my reference photography books, as a character might remind me of an image or photographer’s work. I’ve always based my process in photography and a certain realism that I’m attracted too. The psychology of clothing has always fascinated me. Why people wear what they do. How they wear it, who are they trying to impress, the list goes on.

As far as The Nest is concerned, the research was again based in old photography. Quite often, archive pictures of real families from the period. This is just the start process though. Then it’s into collaborating with the director, actors, producers and other heads of departments. All of the formal wear for Rory and Allison was made and the rest was a mix of vintage buys and costume house hires here in the UK and Canada. The fitting process can sometimes change the direction from where you started. For this project, we ended up very near the initial costume boards. I wanted to create a large contrast between the lived-in everyday clothing v. the crisper formal tailoring.

Do you always have a strong design base and costume boards to keep referring to and to keep the costumes true?
Yes, I like to go back to the boards to make sure it feels authentic. Of course the boards are just a starting point, but I think it’s important to be open and be surprised with discoveries along the way.

Allison is a horse trainer and her casual clothes are, first of all, a reflection of her profession and way of living. But she is also the one who keeps Rory grounded and I think her practical, lived-in clothes show that as well.
Yes, I’d agree with that. There’s an earthiness and warmth to her wardrobe that acts as a disparity to other themes in the film. Ultimately, I wanted Allison to feel real and truthful for her character. Her wardrobe has a chameleon element to it. 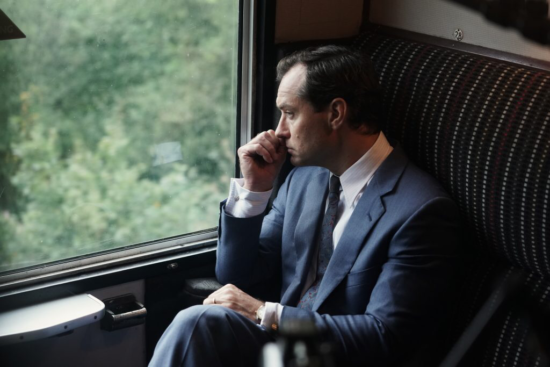 For Jude Law’s Rory, on the other hand, clothes are much more important, from a material point of view, because he wants to project a certain image. How did you approach this character?
I’ve always been a fan of the Soho tailor Mark Powell. He’d cut suits for the likes of Ronnie Cray and Bryan Ferry in the 80s, and I love what he made for Paul Bettany in Gangster no 1. I collaborated with Mark in creating Rory’s suits. I wanted a more Italian cut to contrast the Britishness of the office workers. Mark brings a wealth of experience and talent and knew people like Rory from that period. I wanted Rory’s suits to feel nostalgic but have a modern feel. They’re bang on for the period, but could be worn today without batting an eyelid.

Do you believe that costumes not only relate to the characters who wear them, but also to the modern audiences who watch them?
Absolutely, but as long as we’re being honest to the character and storytelling. I think with The Nest there’s a certain timeless feel as we’ve discussed, but I’d hope the clothes feel meaningful and thought-provoking. With the popularity of vintage clothing, there’s now also a market for modern brands to be influenced from shapes within high end tv & film.

Are the directors usually a big part of the costume process or is it more a conversation about characters and their evolution?
Huge. The best results are always a true collaboration with the director. Sean was very trusting of my approach and nothing went on screen without us both being on the same page. There was a fluidity to working with Sean. Dialogues were always open and we kept discussing ideas, combinations and even changing small things on the day.

Was there anything in particular you felt you needed to insist on because you felt it was important for defining a certain character?
I wouldn’t say insist as such, but I’d always imagined a backless dress for the Allison club scene. Something inspired by the liberation of the 1920s but with an 80s cut. Something strong that showed off-shoulder blades and vertebrae. 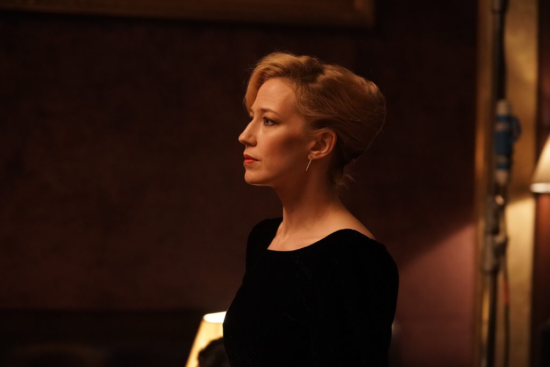 I found The Nest a very harmonious film, visually speaking. It’s one of those films that have a certain style, a mood, doing a great job at creating a certain world. Photography, costume, production design came together beautifully. How does that work?
It’s felt very much an alliance from the start. When I initially fitted Jude, Matyas Erdely (DOP) had set up his camera just outside the fitting space. So we literally tested looks and colours straight off the bat in camera. James Price (production designer) and Emma Scott (hair/make up designer) were always open and inclusive. I’d say we all had a natural regard for each other’s work and to simply do Sean’s script justice. It was honestly one of the most enjoyable processes I’ve been through. Also a lot of fun with good people! Can’t ask for much more.

The remark above is also a way of saying that I wish I saw The Nest on the big screen. What does the movie theater experience mean to you? Why do movies still need cinemas?
It’s a unique sensory experience. When I first came to study in London, in the mid 90s, I used to get up and go to the morning viewings. It was my favourite part of the day. I think they started around 11am and I’d be by myself and a smattering of others. I’ve never lost that buzz of being immersed in a cinema. I don’t think you can replicate that at home, and I’m sure once things open up, people will still crave that. Movies are designed to be seen on the larger screen for many reasons, that’s their Nest.