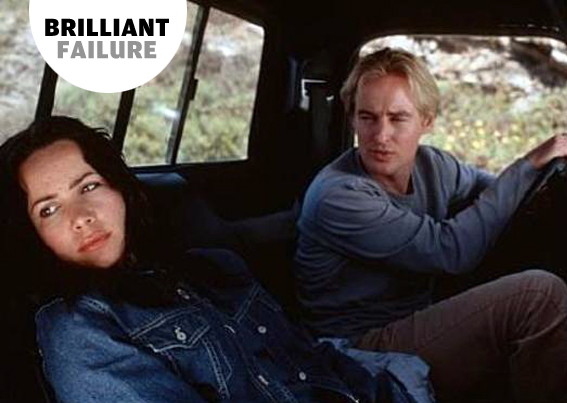 An oddly memorable late-addition to the serial killer cycle of the 1990s, The Minus Man has maintained curiosity value beyond its brief theatrical release largely due to being the only directorial credit to date for Blade Runner (1982) screenwriter Hampton Fancher.

It also boasts a solid cast led by an actor who would become a major comedy star (Owen Wilson), with support from high-calibre character players (Brian Cox and Mercedes Ruehl) and future television stalwarts (Dennis Haysbert and Eric Mabius). Wilson is as affable here as he would be in later comedic showcases, ably conveying the existential angst, homicidal precision and philosophical complexity that make his titular serial killer a more down-to-Earth cinematic cousin of Blade Runner‘s charismatic replicant Roy Batty.

Vann (Wilson) is an outwardly innocent drifter who has no problem making friends and finding work in any town that he decides to spend some time in. But he is actually a serial killer who selects victims based on how unhappy they seem to be, then puts them out of their perceived misery. After killing a disillusioned junkie, Vann arrives in a small coastal town and rents a room from Doug (Cox) and Jane (Ruehl), a couple whose marriage has become strained. Doug helps Vann to get a job at the local post office, where the drifter turns out to be a model employee, attracting the romantic attention of his co-worker, Ferrin (Janeane Garofalo). Vann murders a high school football star (Mabius) and a patron at a diner, so must keep one step ahead of the subsequent police investigation, while also being taunted by a pair of imaginary detectives (Haysbert and Dwight Yoakam) who ‘visit’ during blackouts.

In-keeping with the film’s title, Vann remains a cipher: we do not learn anything about his background, his upbringing or the cause of his condition. However, this lack of back-story combined with Wilson’s easy-going demeanour, also serves to explain the appeal of Vann to his unsuspecting friends, co-workers and casual acquaintances in that Vann is a blank slate on to which others can project needs and expectations. Therefore, the drifter becomes a drinking buddy (Doug), a ‘replacement’ for an absent child (Jane) and a potential partner (Ferrin) without needing to reveal much about his past apart from some vague stories about family illness and previous job experience. ‘They come to me like moths because I shine’, muses Vann in voice-over; the serial killer is acutely aware of his appeal as a stranger in small towns where many people are looking for some novelty to enliven their humdrum existence.

The Minus Man does not entirely work as a thriller as Fancher’s pacing is erratic and Vann’s murders have few immediate repercussions. Nor does it offer any insight into the mind of the serial killer, despite Vann’s reflective voice-over and a few digressions into his psyche. Events often occur around Vann rather than being instigated by him, with the serial killer serving as an unlikely guide to an America where everyone is harbouring a secret or dealing with loss or unfulfilled promise, making the murderer one of the more ‘stable’ members of the community. There are similarities to Bryan Singer’s debut Public Access (1993), in which the host of cable access talk show causes small town tensions to escalate, although Singer’s anti-hero was an agent provocateur, whereas Fancher’s serial killer seems disappointed to have found such problems in a seemingly quiet coastal town. Violence lurks in everyone, but some are better at controlling their urges than others, meaning that Vann can hide in plain sight providing that he does not become too attached to a particular area code.