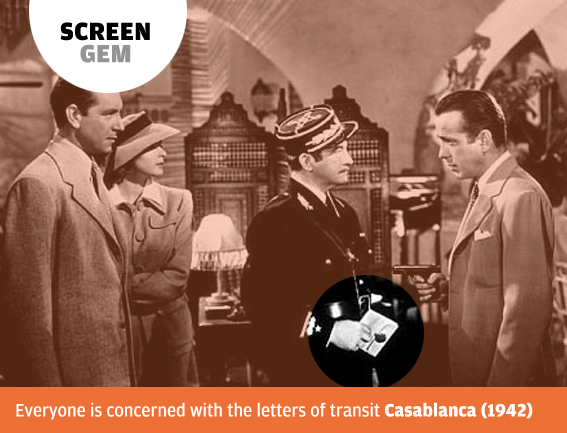 Anything Peter Lorre and Humphrey Bogart have to hide from the Nazis, and Sydney Greenstreet and Ingrid Bergman would give their eyes to own, is certain to be an important onscreen object – but Casablanca‘s letters of transit exceed any normal measure of cinematic significance. They are perhaps the most evocative items in film.

And yet, were they placed on a table with some of cinema’s few equally evocative objects (the horse’s head from The Godfather, a lightsabre from Star Wars…) only the most obsessive cineaste would recognise them. Because they are simply pieces of paper, and because they spend most of the movie as hidden from the audience as they are from those who wish to acquire them, they are not visually iconic. But describe them, or mention their name, and the associations that flood the mind are instant and unrelenting.

As Peter Lorre purrs in his much-imitated manner, they are ‘letters of transit signed by General De Gaulle’ that ‘cannot be rescinded, not even questioned’. They are the only way any ordinary citizen can be sure to escape Casablanca; two Nazi officers were murdered to obtain them and, during the beginning of a beautiful friendship, another is killed to ensure they are allowed to work.

Bogart’s Rick Blaine could use them to escape with the woman he adores, and who adores him; he could sell them to anyone at any price; he could hand them to the Nazis and perhaps win their favour; or he could allow Victor Laszlo, hero of the resistance and husband of his beloved Ilsa, to leave with her. More than anything else in the movie, Casablanca‘s letters of transit illustrate that Rick’s choice is as difficult as Sophie’s.

Their significance is almost endless, both within the film and within the popular imagination, into which its every scene has seeped. They represent hope, freedom, and the chance either for film’s greatest lovers to be reunited or for film’s greatest villains to be foiled. They resonate with us most, though, because of the power they give Bogart’s character. As Spiderman taught us all, ‘with great power comes great responsibility’ – and it is in rising to the responsibility brought by the letters of transit that Rick Blaine becomes cinema’s noblest icon.

One reply on “Screengem: The Letters of Transit in Casablanca (Michael Curtiz, 1942)”

The letters aren’t signed by De Gaulle they are signed by Maxim Weygand who was a Vichy commander.