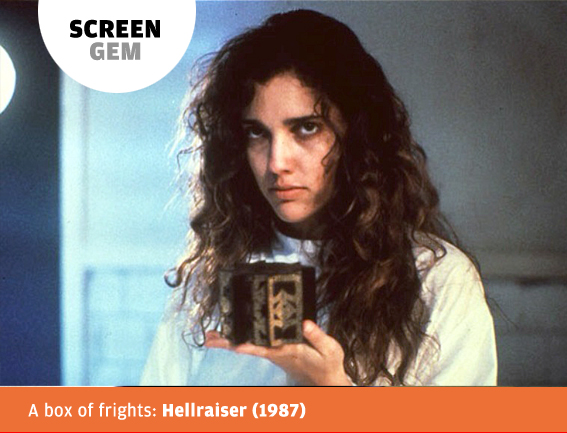 Like Pandora’s Box, the Lament Configuration Box had the power to unleash Hell on Earth.  Unlike that particular casket of secrets however, this one held little hope at the bottom for those unfortunate enough to open it.

The box, which made its screen debut in Hellraiser (1987) and is to all intents a variation on the Japanese Puzzle Box, was originally introduced as the ‘Lemarchand Configuration’ in Clive Barker’’s horror novella The Hellbound Heart.  Philip Lemarchand, an 18th century French toymaker and creator of mechanical birds, was commissioned by the Duc de L’Isle, an aristocrat obsessed by black magic and the occult, to create a device which could assist him with opening the gates to a parallel world – which it did with catastrophic results.

Though the Lament Configuration Box, as it became known, was the most famous, other Lemarchand boxes were to feature in the Hellraiser film series, including a number of ornate variations owned by the obsessive collector Dr Channard in Hellbound: Hellraiser II, the followup to the groundbreaking 1988 shocker.

Puzzle boxes were originally created in the Hakone region of Japan, and could be opened with anything from a couple of simple twists to complicated combinations involving hundreds, sometimes thousands, of possibilities.  Generally those clever enough to solve the puzzles were rewarded by finding a gift or good luck charm hidden within.  Not so though with the box from Hellraiser which when opened unleashed the Cenobites, a group of freakishly disfigured demons led by the seductive Pinhead – though it was suggested that the unfortunate victim would be mutilated in a fashion which would give them intense pleasure, a just reward for their inquisitiveness perhaps?

Authentic replicas of the beautiful boxes, mesmerising in their intricate detail, have become popular collectables amongst fans of the film series and Barker’s stories.  The ultimate compliment though is to be referenced by other films, as our box of tricks was in the hit The Cabin in the Woods (2012).  This film initially homages Hellraiser by having its young protagonists discover a similar spherical puzzle in an early scene, whilst later the same box is shown in the hands of a Pinhead lookalike.

All may not be lost however as towards the end of the original film the heroine Kirsty manages to reverse the hellish puzzle and send the Cenobites back where they came from.  At least until the next poor soul finds it and unleashes the creatures again, who will drag him to a place where he can ‘lament’ his folly for eternity.